Since this topic seems to get a lot of traffic I've decided to update it.

It has 16GB of Ram, a Retina display and 1TB of PCI memory. For Photography, this thing is a beast. I love it.

10 Reasons Why The Macbook Pro Is The Best Laptop

First off, am I a fanboy? No. I started using mac computers only because my work required me to use Final Cut Pro. But, after dealing with windows constantly and the headaches of always have to wipe and reload windows and fix my moms computer, I started really liking OSX and the fact that Apple really uses great hardware with excellent quality control. So I made the switch.

And now Apple has recently released their new Retna Display Macbook Pro which has created a whirlwind of discussions. A lot of people complain that they are ridiculously overpriced and that Apple users will buy anything with a Apple logo on it. Or, that apple users are sheeple. When in all reality, the Apple Macbook Pro is the best laptop you can buy and well worth every penny. 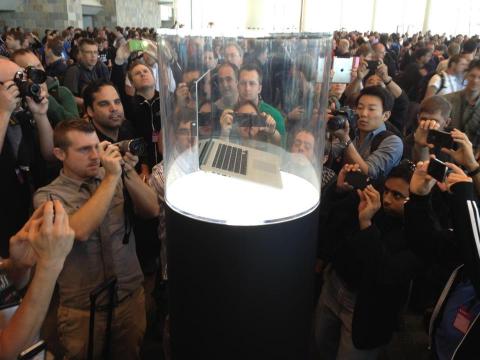 1. Best trackpad in the industry. It is huge, feels great, very responsive, and has multi touch gesturing. Try to get that out of a cheap Asus or Dell.

2. Mag  Safe Power Adapter. The power chord attaches magnetically so when your dog or cat or kid runs by and gets tangled in it. It safely and gently pops off.

3. Back lit keyboard. Some laptops have them but it's rare. More have caught in on the last few years but all Apple laptops have it and it's very convenient.

4. Unibody construction. The Macbook Pro's are very solid, sturdy, and the design is clean. Most laptops out there feel like they're always trying to fall apart. Or they are made of plastic. And they're extremely light.

5. OSX. I know, a lot of people think it sucks. But it's better than windows for your average consumer. Plus, when the new OS comes out, it's only 30 bucks.

6. Excellent LCD displays. Most laptops I look at or deal with that are not Macs usually have crappy bottom of the line LCDs put in them to bring the cost down. This is not so with Apple. The MBP has some of the best LCDs and now they have the option of a Retina Display. Pretty much the best display you can buy in a Laptop.

7. Applecare. For a mere 300 dollars more you get three years of guaranteed protection from failure. Other companies have these kinds of options, but Apple has a store just about everywhere in the US. You can walk in with your broken laptop and they will fix it in a few days, or hours with no questions asked. If your Dell or Asus breaks, you can be out of a laptop for weeks while it is shipped back to the service center. And with Applecare when those three years are up, you should be able to get another two years out of it before the software demands become too high to support your hardware.

8. The best hardware. You won’t find cheap parts in an Apple. Often times they don’t use the fastest graphics cards or processors but this is for good reason. Laptop and not just Apple laptops are usualy clocked down and given less voltage to conserve battery life.  Apple has always focused on a harmony between horsepower, power consumption and heat generated. If you’re trying to render a particle sim in Cinema 4D on a laptop, then you're doing it wrong.

9. It has the Apple logo on it. So you’ll look cool. It’s true. The world is run by fads and fashions. Apple has a reputation, and that reputation is that their products do not suck.

10. You can get all the things listed above in one laptop. A lot of different laptops have many of the features listed above, but usually not all of them in the same machine. You’ll get a nice unibody laptop, but they’ll throw some cheap underpowered i5 processor in it, with very little graphics power.

Bonus: All Apple computers come with a free apple sticker you can put on the back window of your car.

And let’s not forget, you can run Diablo III on a Macbook Pro. Especially the new ones with the faster graphics cards. So yes, they are good for gaming. And you got bootcamp if you need directX. Who really needs to play Crysis at 200fps anyway?

So my final thoughts. Just embrace something that's good. No reason to hate it because a lot of people use it and love it. If you do, then the joke's on you. It is true, some people are mindless sheeple and will buy things they don't understand just to make themselves look cool. But Apple does make good products. Probably the best products, and I'm not just saying that. I use to use windows. I still do for 3dsmax. But for general use, I prefer OSX and apple products for the support and peace of mind.