Probably the number one question I get asked by followers is "What camera are you using?" or the phrase I hate the most "You camera takes amazing pictures." 🙂 Don't say that one to photographers. They hate it. The reason is my camera barely ever takes great pictures. I usually have to spend anywhere from thirty minutes to two hours in Lightroom and various other programs to make them into great pictures.

So to turn over a new leaf in digital photography I've decided to start posting a lot of my iPhone pictures from the last few years. These things are 8 megapixels now and can take some wonderful pictures. Plus a lot of people already have some sort of smart phone with a digital camera built in that probably also takes great pictures.

Another question youngsters ask me who are looking to get into photography is, what camera should I get? Well in my opinion. The Nikon D800E if you got the money. If you don't just start using your iPhone or Android phone. When I was first in filmschool and first graduated I was only able to shoot on film. I later got an 8 megapixel Canon camera which was a lot of fun. But for several years it was only film. You know how bad that sucks? I mean it's great because nothing else looks like 35mm, but sucks at the same time. You'd get only like 30 shots per roll and you could spend up to 30-50 dollars getting them professionally printed and processed. You end up not having a lot money or flexibility to really experiment and discover your style. So my photography was limited. Then I got my Rebel and I could do a lot more. But now, today, you can just start shooting on your phone. These things are amazing and better then I ever had when I was starting out.

When I go out on photography adventures I usually take my Canon 5Dmkii and a few lenses. Usually the Canon 16-35mm f2.8L II and the Canon 70-200mm f2.8L IS II. I use this for most of my landscape and city stuff. But for shooting daily life and the culture of the areas I'm in I always like to use my iPhone. And the reason is, it's way less intrusive. People get scared when you point a big ol DSLR at them. But when you shoot an iPhone nobody really thinks twice about it. So that's sort of how I use my iPhone. It's a completely different style of Photography but also very cool in capturing culture and lifestyle.

So I guess they have pigeon men in every culture. Never knew that. But I discovered it in Kyoto Japan. I shot this photo on the iPhone 4 using the hipstomatic app. This app is cool but I eventually had to turn off all it's random variables. Like it crops your shot but sort of does it randomly so you never know what your getting with your framing. It's cool and vintage but not necessary with the current techonolgy. 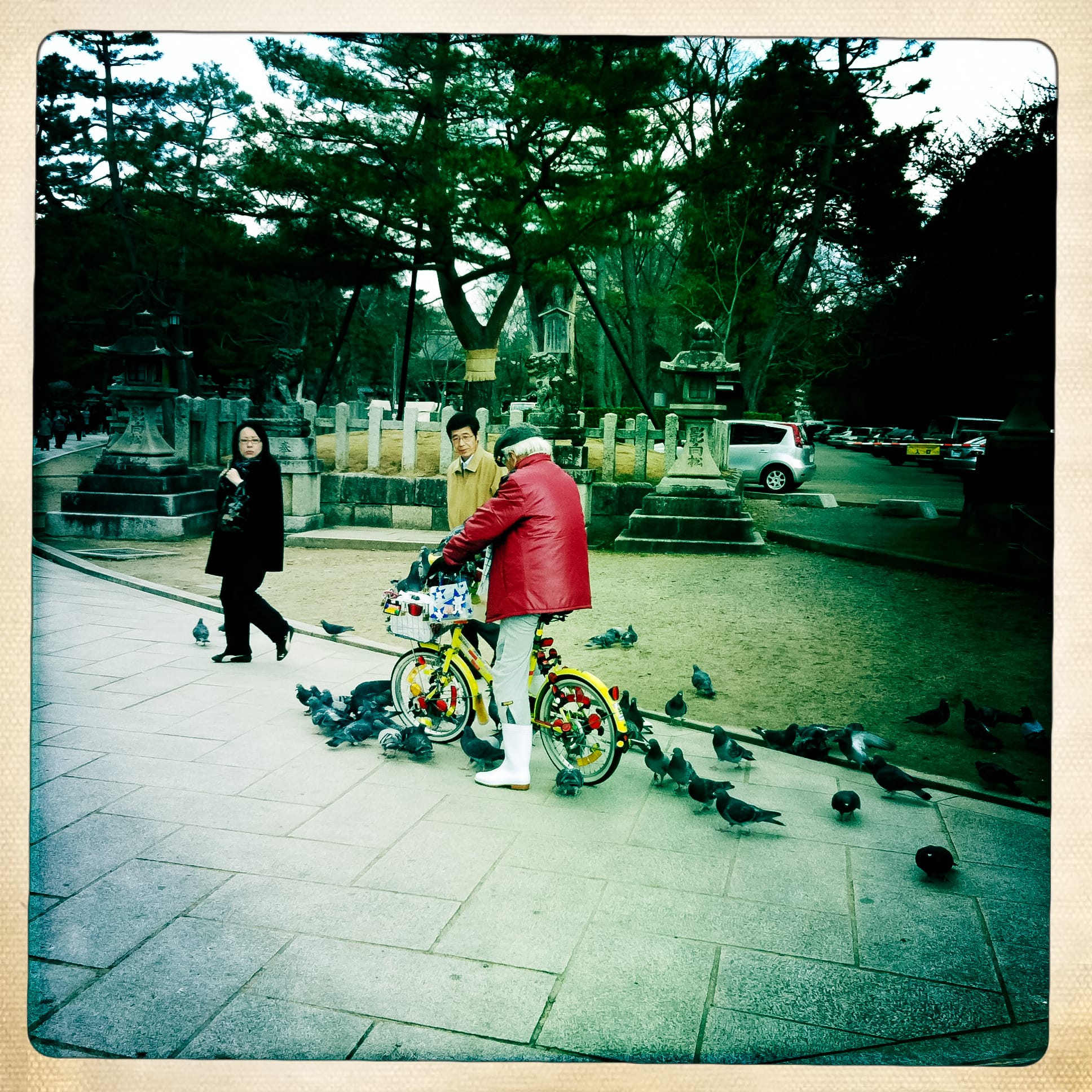