It seems like the rest of the photography world is finally looking at Sony as being more of a serious camera company than the underdog it was. I say this because I've always felt Sony's cameras never got the same support you would get from a Canon. With software, 3rd party supplies and even by Sony Itself. They still have a bad reputation for lacking great firmware upgrades.

But this morning I was just looking through the specs on the new Camera Raw 8.4 RC. On that list is a whole ton of Sony Lenses.

Look at all these Sony Lenses! 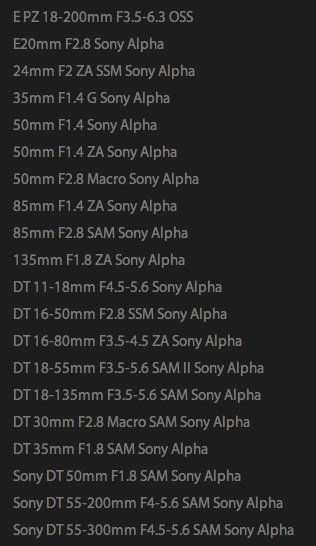 Some Intern was probably very busy for awhile to get all those supported and tested. 🙂

I'm glad Adobe was quick to support the Sony A7r and the Zeiss 35mm lens. I think the next few years will be interesting in the camera world as Sony seems to be completely dominating with it's technology. They're even making Medium Format sensors for Hasseblad and Phase One now. If only Canon would start using their chips too. 🙂

A few new lenses and cameras for Canon as well.

And as always RC also brings a little bit more support for Canon as well.