You can spend hundreds, or even thousands on landscape photography tutorials, or . . . you can just shoot with Fujifilm.

Here is all I did to get these results.

My goal is to always do as little work in post as possible. It’s not always easy since the dynamic range of the shot, especially sunsets, is usually just more than what the camera can handle. But when everything just lines up, and you’re shooting with Fujifilm and you have access to their film simulators, you really don’t need to do much.

Here is all I did in Lightroom to enhance this shot.

– First thing I did which is shown in the middle column is turn on the Velvia profile. These also come in-camera but will only bake in the effect when shooting JPEG. If you have a shot that doesn’t require a lot of dynamic range, your ‘look’ will usually come out a lot better if you let your camera just make the JPEG. In this case I was shooting RAW, so I converted it to Velvia in Lightroom. You can also convert your RAW’s into JPEGs quickly in camera by pressing Q twice then hitting OK.

– Next thing I did was adjust some basic tone controls shown in the left column. Added some contrast, then raised the shadows and highlight which kind of undid a little bit of the contrast. Sometimes when raising the contrast you’ll also have to turn down saturation a small amount since the contrast tends to to punch the colors a little harder.

– Last thing I did was a little local brush shown in the far right column. I just added a little bit of clarity on the mangroves and lifted their shadows slightly.

I’m actually pretty happy with the above results, I could tweak the colors and saturation a bit more but the image is pretty much there.

But of course, it’s always possible to do more.

Because You Can Always Do More

To take the shot a step further all I really needed to do was clean up those highlights. Since I knew I was going to be going to Photoshop I decided to use Iridient Developer to do the initial RAW conversion. Iridient produces a significantly cleaner image than Lightroom but their film profiles such as Velvia don’t handle the highlights as well. I was using Velvia v3.3.

In this case, this was fine because I knew I would be rebuilding the highlights from a different exposure anyway.

So I processed two RAWs in Iridient, the RAW shot above and a shot that was -2EV darker. Combined them together in Photoshop, added a little extra enhancements to the sunset, some local sharpness, a couple little tweaks and that was about it.
Total time was maybe 15 minutes. And part of that was spent hunting down my MacBook Pro power cable that was in the other room since my battery was at 4%. 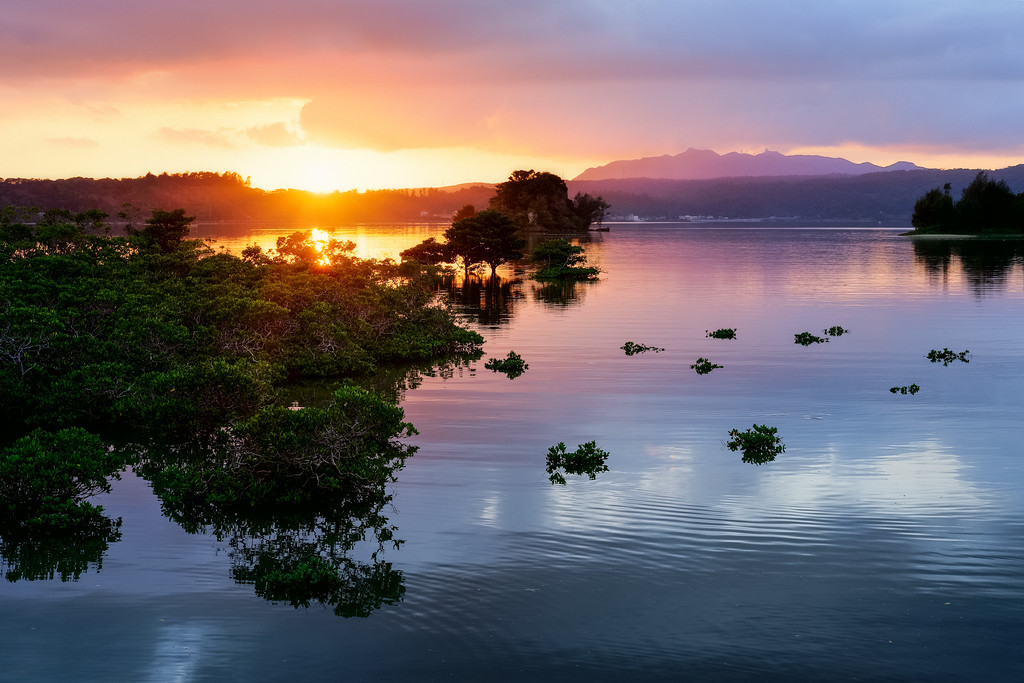 Both images are really close and if you weren’t really paying attention you probably wouldn’t be able to tell the difference. Some might even like the first shot more.

But wow, pretty cool hu? These kinds of shots are always a nice surprise since it means I don’t have to spend two hours in Photoshop fixing everything.

If you’re wondering where this shot is from, it was in Okinawa on the main island right before the bridge that goes to Ojami island.