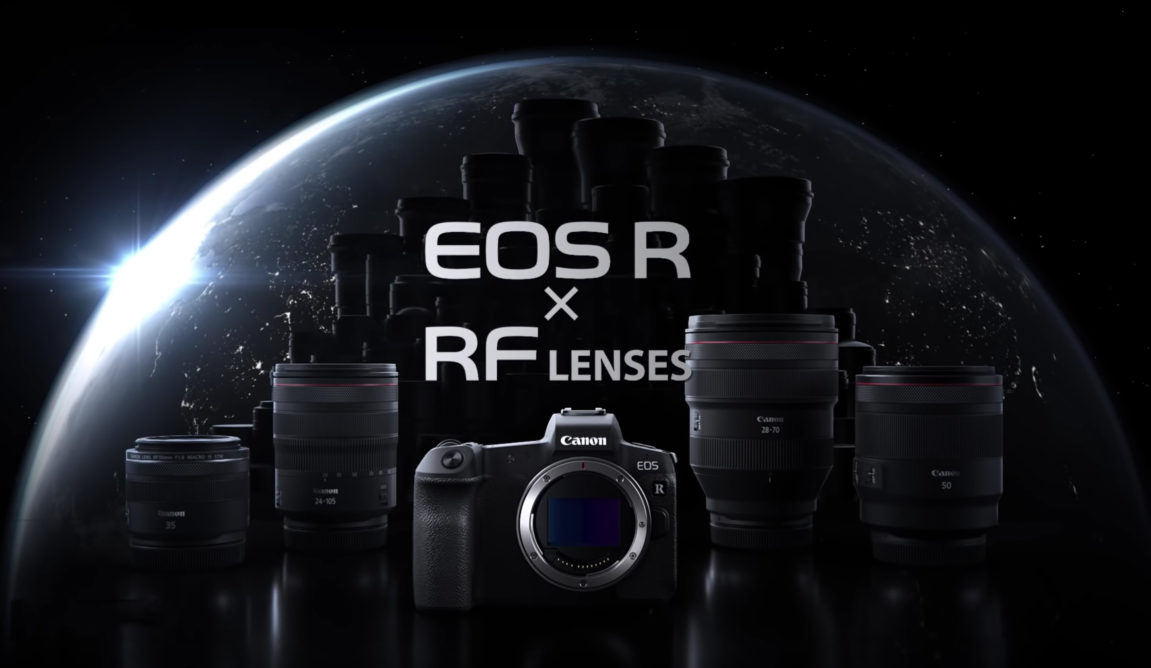 As the mirrorless Armageddon comes to a head, it looks like Canon just dropped the most advanced camera we’ve ever seen. Period. Undeniable. I’m talking about the Camera itself, not the engine inside which still has plenty of horsepower.

It might not be a spec god, but the camera is unlike anything we’ve ever seen from anyone. It really is doing so many things I love and is taking advantage of technology that you would expect to see in a Playstation controller or a Nintendo Switch or something.

Let me share a few things I think are incredible. Then I’ll point out the obvious bad things that are triggering people. Remember, this camera is not for everyone, but it’s the beginning of something new. It’s like that quote from David in Prometheus, “Big things, have small beginnings.”

. . . and my Macbook Pro has reached its four-year birthday, you know what that means, its dying. My enter key and question mark key work on and off so I have to code all my returns in manually by html. Fun!

New Style of Lenses With A Control Ring

It looks like the new Canon RF lenses will all have a control ring on them. You will be able to customize for a bunch of different settings, kind of like you could do with the Fujifilm X100F focus ring. This means, you should have enough dials at your finger tips to completely control ISO, Aperture and Shutter manually without having to move you hands. Just like you can do with Fujifilm lenses and cameras. Except with Fujinon lenses you’re limited to only controlling aperture with the lens ring. (except the X100F).

You can almost do this with a Sony A7III, but you have to set ISO or something to the back wheel, which means you have to shift the position of your hand to change it on the fly and you’ll never be able to adjust all three settings at once. Having a control wheel on the lenses is simply brilliant.

One thing I really love about Canon L lenses is they focus fantastic in manual mode. There isn’t that cheap fly-by-wire focus feel that so many Sony lenses have now. I really hope these lenses have the full-time manual override with a mechanical focus coupling like my older Canons L lenses. It looks like they might. That’s one thing I hate about Fujinon and many Sony lenses.  Update: The EOS RF lenses are focus-by-wire. Bummer 🙁

This is a customizable function bar that you swipe with your thumb to control different settings. I imagine you could set it for your exposure compensation, or hopefully you can use it to swipe between focus modes. One of the things I absolutely love about the Fujifilm X-T2, is how you can adjust focus, from C to S to M with a switch on the body. If you’re able to perform functions like this on the Canon EOS R, that is a huge win for a lot of shooters.

Three new adapters that are geared towards different photographers. I imagine a lot of people will just get the standard adapter, but they are releasing an adapter with the control ring, so you can have that left-handed control of some settings like with the new RF lenses.

The drop in filter adapter will be fantastic for video and landscape shooters. You can keep just buying EOS EF lenses and you’ll never have to buy adapters at different sizes again. This will also allow you to use ND filters without crazy vignetting as well as polarizers on ultra wide lenses without messing up the skies.

What The EOS R Missed

4k Video in 1.7x crop.This is a big deal for video people. Not sure why because thousands of movies have been shot APS-C / Super 35mm, suddenly that’s not good enough soccer moms and teen vloggers. 1.7x will be a little smaller than super 35mm. But ok, but I get it, hardcore videographers would like 4k for documentary style work especially since the camera has such an incredible bitrate, 480mbp. So we almost got something really cool, but then Canon ripped it away from us.

In reality though, the Sony A7III only does 100mbps. 4k at 1.7x with 480mbp is much better than the A7III 4k with no crop at 100mbps. That’s over 4x the bitrate of the A7III. It’s weird to me how people just look at numbers and get triggered by them, while completely ignoring other numbers.

I’m not sure how to feel about this. There is this obsession with IBIS right now. I was excited when it first came out in the Sony A7rII so I understand. I turned it on and started using it then realized, hmm, it’s not that useful. When I’m shooting people I typically keep a shutter of around 1/100 sec or higher depending on how long my lens is. Most things I’m shooting are moving so I can’t use a slow shutter, unless I’m shooting on a tripod with a landscape.

I’ve definitely had IBIS ruin more shots than it’s saved by leaving it on accidentally. Now I mostly just keep it off full-time unless I’m shooting some video. If I was an Instagramer that shoots orange and teal landscapes at sunset with a little man with a red jacket in every shot and that’s all I did, then I think IBIS might be useful, since it would allow you to get down to 1/10″ shutters speeds no problem and you could tell the little man in the red jacket to hold really still. But it seems a lot of those guys (that I follow anyway) are still using Canon 5DIVs without any problems as they are mostly using tripods anyway. If they don’t use Canon, they use the Nikon D850 with the 12-24mm, like Max Rive.

IBIS in video is still very useful. Back when I shot video a lot with the Canon 5DmkII, to eliminate those micro shakes you had to put the camera on some sort of mount, like a Halo Rig or I would just put it on a super lightweight tripod and hold the tripod. That kept the camera steady. Having IBIS really helps in those situations. However, I’ve yet to see a full frame camera have IBIS that is game changing like we see on the Olympus, Panasonic or Fujifilm X-H1. If I were to get a camera for video, I would almost certainly get an X-H1 simply because of how good the IBIS is.

Regardless, all cameras are going to have to start including IBIS because people have had their minds hacked into thinking its better than sliced bread. Unless Canon can get the influencers to tell the truth about it. Maybe more trips to Hawaii.

Here we go again. I honestly don’t get the obsession over one card slot lately. People have lost their minds. I’ve seen so many influencers recommend cameras like the Fujifilm X-T20, saying it’s the best bang for the buck. Yes it is. But last year when that came out, nobody complained about only 1 card slot. Why is everyone so hard on cameras with only one card slot now?

I don’t think Canon considers the EOR R as a professional camera. Canon lines up their cameras differently than Nikon and Sony. Canon will release a few cameras with similar megapixels, making one the pro the other not. It’s more like Fujifilm. This then forces the Canon customers to buy the more expensive body to get the professional features. It’s sneaky and annoying and putting in two card slots would be a nice courtesy. But there is this thing happen right now where most cameras are good enough and this gives consumers less and less incentive to upgrade, so it looks like Canons strategy is to release a several different cameras that are geared towards very different needs. Sony, Nikon, Fujifilm all do this. Canon just released them in the wrong order so people are pissed.

The Canon EOR R is the Fujifilm X-T20 of the lineup. You will see a higher quality camera with all the good stuff soon.

The EOS R shoots at 8fps continuous, but only 5fps if you want AF. I personally don’t see a problem with this. Again it’s not for wedding photographers. It’s funny because I actually only shoot my X-Pro2 and X-T2 on Continuous L the settings at 5-fps speed for street photography. I’ve found 5fps to be sort of perfect, because I don’t want to have to deal with 20 frames when someone is stepping out of a shadow in the perfect location.

I haven’t had the camera in my hands yet, but I imagine we will see some serious improvements in image quality as well. It looks like it has the same sensor (or very similar), to the Canon 5DIV, but the new image processor should bring a lot more to the table. They usually do.

To me, having a camera that has a nice balance between landscape photography and portraits without having 70MB files is really nice for a casual shooter like myself or Instagramers that aren’t doing any extreme high-speed photography. I shoot many different styles of photography and it looks like this would be a great one camera choice for other people like myself.

I really think this might just be the perfect vlogging or Instagramer / Travel camera. 30MP is a really nice balance between resolution and file size and the faster lenses will have a nice advantage over Sony lenses for those looking for shallow depth of field and low light performance.

Currently, I have a Sony A7rIII that is just overkill for almost everything I do except landscape photography, then I use my X-T2 and X-Pro2 for everything else. I’m definitely buying the X-T3 as I am fully invested in Fujifilm glass.

Like every other photographer on the planet, I also have a bunch of Canon lenses just sitting around. The 24-70mm f2.8L, the 70-200mm f2.8L II, a horrible 100mm macro, a 16-35mm f2.8 II and a 40 pancake and a few more. All I really need now is the new 24-105 IOS lens and I will be able to handle almost any situation. Then, because of the RF mount, I shouldn’t have any problems adapting all my Handevision and Voigtlander Leica M mount glass when adapters become available.

Hopefully this all makes sense, I’ve had a crazy headache the last few days, but let’s always remember, photography literally means, “drawing with light,” not drawing with specs.