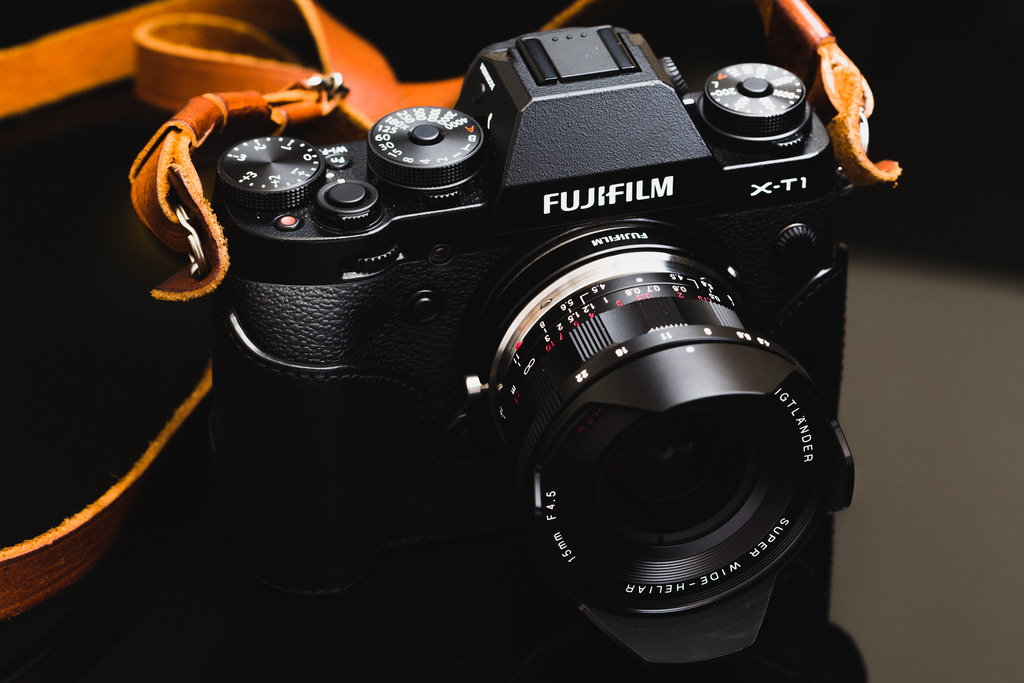 Since early 2013 with the introduction of the X100s, the Fuji X-Trans CMOS II APS-C has been Fujifilm’s flagship sensor that they’ve been using in all their APS-C cameras. While winning much praise from Fuji fans, the sensor also holds a lot of mystery and even retains some criticism. The performance specs of the sensor after all remain relatively unknown.

The last time DXOMark touched a Fujifilm camera was back 2013, completely ignoring this new sensor and we’ve been left in the dark on how it rates against the competition in terms of dynamic range, sharpness, high ISO and color accuracy.

My guess is DXOMark gets a little kick back from some of these other camera brands and rating Fujifilm would be a conflict of interest, for very good reasons as you’re about to see. Just my theory.

Sony, The King Of Sensors?

As we all know, or should I say, according to DXOMark, Sony makes what are considered to be the best sensors out there. With the Sony A7r (and soon to be A7rII) being their best camera in terms of sensor performance with still photography, the cameras also has this special capability of being placed in a 16 megapixel APS-C crop mode. This makes it the perfect camera to put up against the Fuji X-T1 at a pixel-to-pixel comparison. Meaning, I’m not going to compare the Full Frame vs. APS-C qualities of the camera, instead I’m comparing the real estate of the sensor itself.

With the Sony A7r placed in APS-C crop mode it becomes nearly identical to the Fuji X-T1. Both cameras will be at 16 megapixels, both having a 1.5x APS-C crop factor. Both sensors are even manufactured by Sony, but both cameras seem to produce two very different RAW files.

To keep this test precise, I used the same lens on each camera. The Voigtlander 15mm f4.5 Heliar III. It’s a lens built for a Leica M mount and specifically optimized for the digital sensor. In APS-C mode it’s roughly 22.5mm in the 35mm equivalent format.

There is a key differences between each sensor that is important to note. 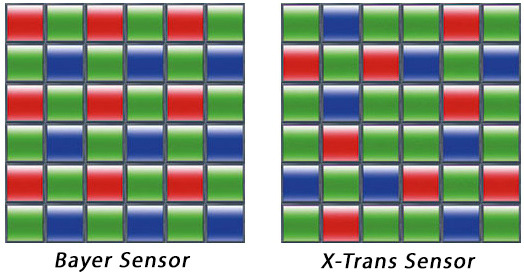 You’ll also notice on every horizontal and vertical line all three color pixels appear on the X-Trans sensors. On the Bayer sensor each color pixel only appears on every other line.

2.  The Fuji X-T1 limites the camera to ISO 200 When Shooting RAW – This allows for some additional highlight recovery and dynamic range that the Fuji XT1 should take advantage of.

For the following comparisons I matched the camera settings exactly. Shutter, ISO and Aperture were set to identical settings. I used the color card to properly white balance each shot.

Since Iridient Developer is still superior at processing X-Trans RAW files over Camera Raw 9.1, I did a comparison with both Lightroom and Iridient.

Also note that each camera manufacturer adds their own spice to their RAW files. Sony has been rumored to sharpen up their RAWs a bit. Fujifilm stores lens profile corrections in their RAWs and I’m also guessing they do some moiré removal which will soften the image. This is why Lightroom might appear a bit softer than Iridient, becuase Iridient might be ignoring some of this Fujifilm RAW data, leaving in the moiré. This is just my speculation.

All settings turned off. No sharpness or noise correction. All images from here on are at a 100% crop. 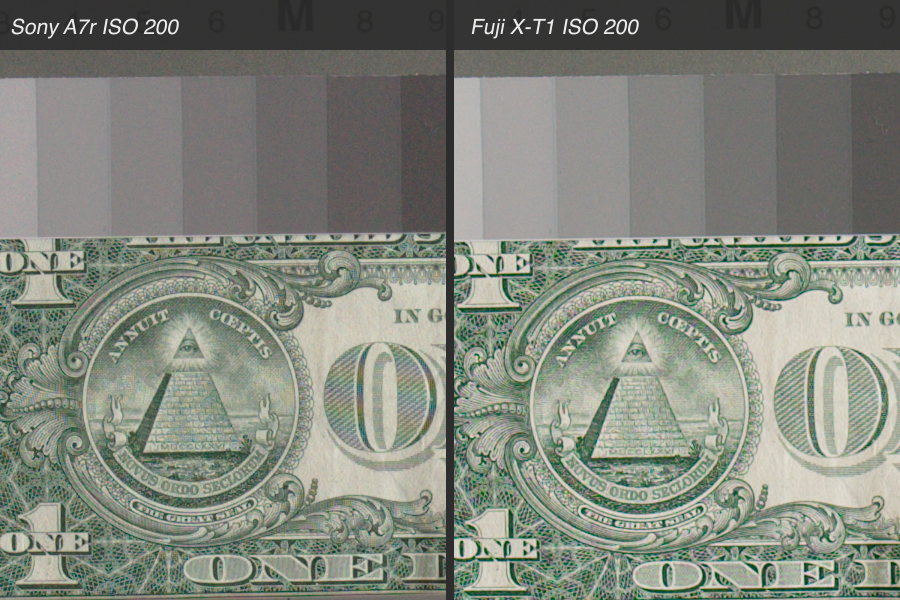 Here with Lightroom there are no color patterns that appear on the XT1. Also less noise all around in the mid tones.

All default sharpness and color noise settings turned off. 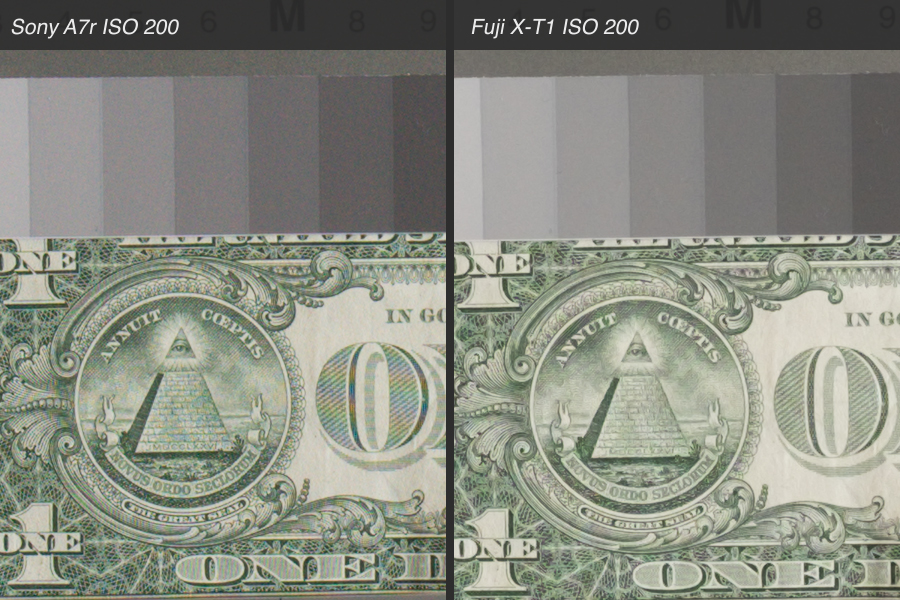 The Fuji X-T1 outperforms the Sony A7r here with noise control but the Sony A7r appears to be slightly sharper. Note, I was using Lightroom, with Iridient the XT1 would appear much sharper.

This is shot at ISO 200 and with the exposure lifted 3 stops. 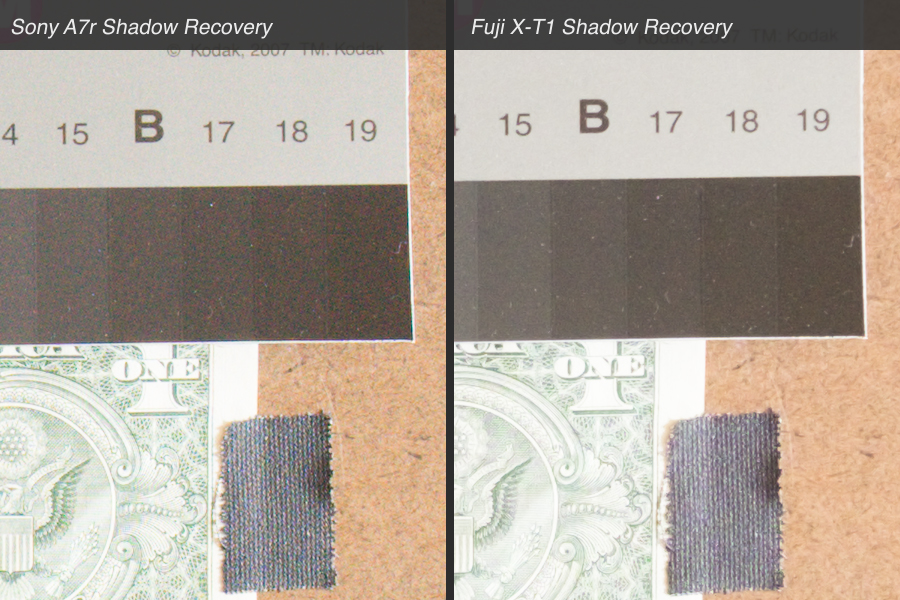 I only took the cameras to ISO 6400 since that’s the native limit of the Fuji X-T1, and most normal people don’t shoot higher than this anyway.

Again, the Fuji X-T1 outperforms the Sony A7r.  You can actually still make out the different shades of black between 15-18. On the A7r it’s just noise.

This should mean that the Fuji X-T1 actually has a better dynamic range than the Sony A7r, or Nikon D810, crop or no crop.

However, it looks as though Fujifilm adds some color noise reduction to their RAW files, and it seems Sony adds sharpness theirs, which is why there is such a drastic difference. 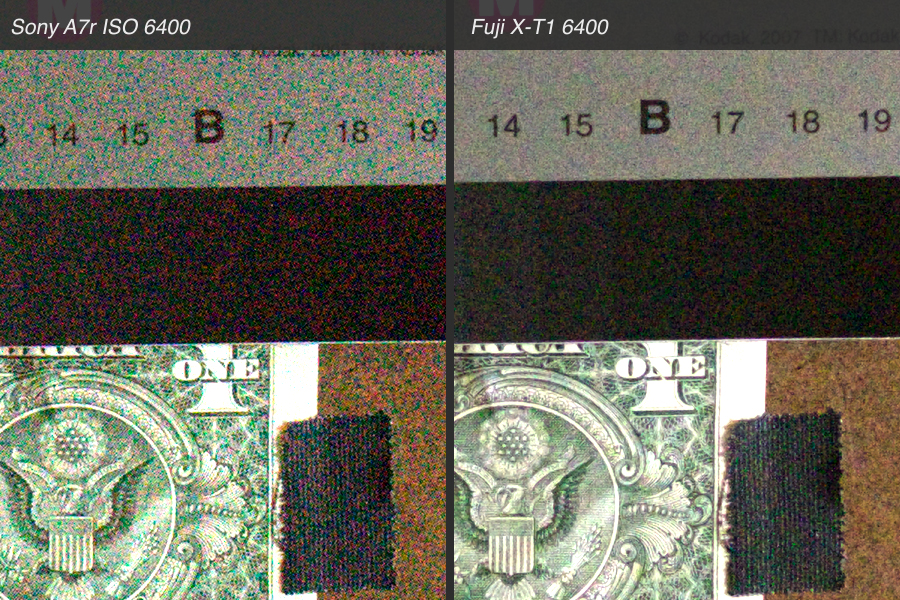 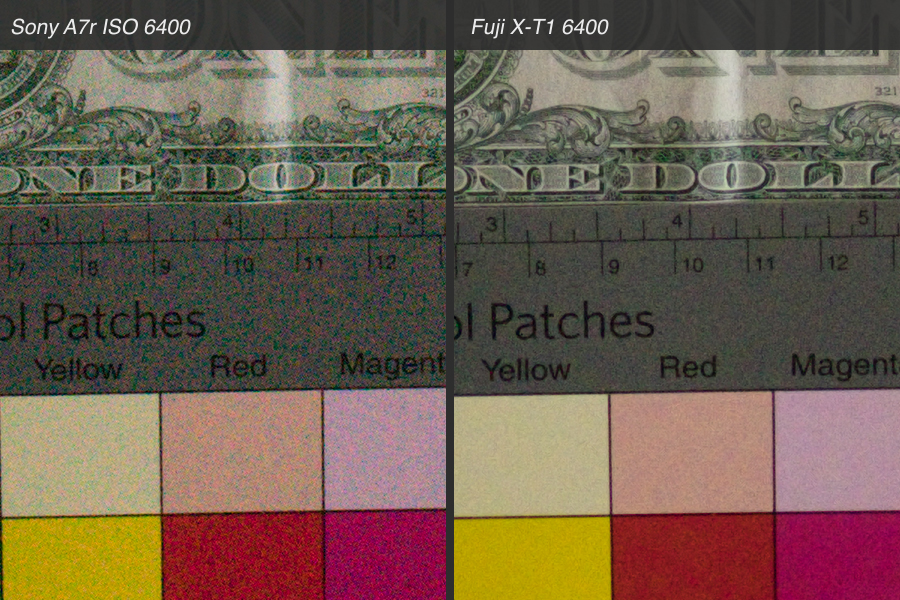 It is often rumored that Fujifilm cheats their ISO. I honestly don’t see that at ISO 6400. I used the exact same settings, shutter speed, aperture and the same lens. Both images seem to have matching exposures. I know some people have shown otherwise in other tests, but if you’re not using the same lens, then those tests are invalid since different lenses allow different amounts of light to pass though. Unless they are cinema lenses with T-stops

The highlight separation between 2-5 look a little nicer on the XT1 and more defined. But for some reason the Sony A7r remains a little brighter even though both settings were the same. Usually they are pretty close with matched settings.

Here there is a difference in exposure, but it was still shot at ISO 200. In the other tests at ISO 200, exposures were the same. Only when the cameras are over exposed does the Sony A7r appear brighter. So Fujifilm must be doing some sort of ISO highlight recovery here possibly pulling the camera to ISO 100.

If the Sony A7r wasn’t a little more overexposed, I’m sure the results would look the same. 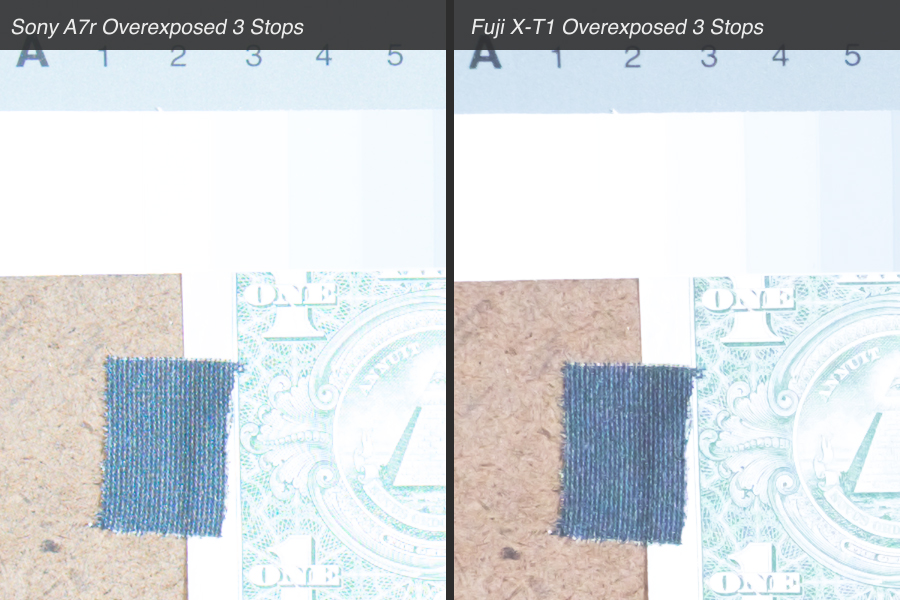 This is the same image above, but recovered by 3 stops. They both perform about the same here except no color patterns on the XT1. 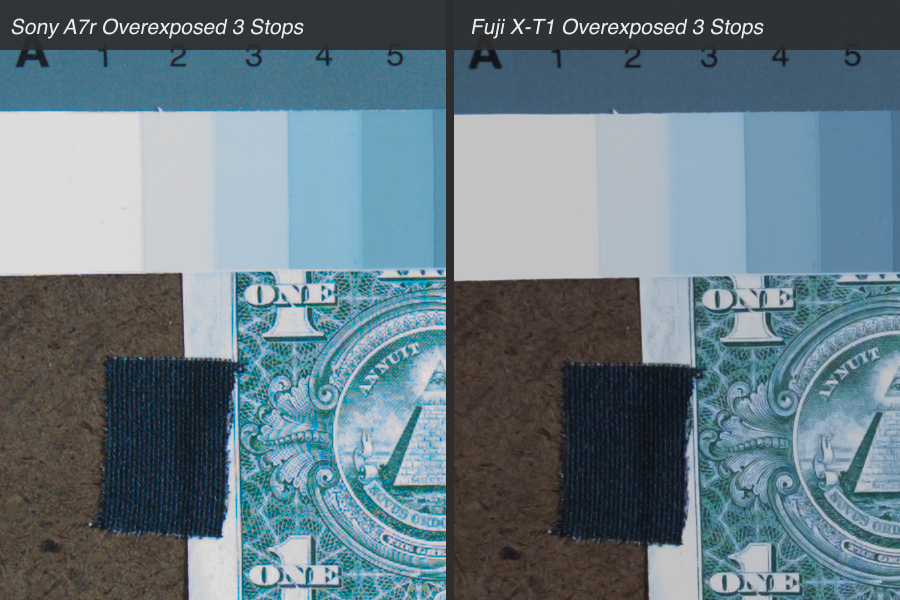 Fujifilm cameras have been known to be legendary when it comes to colors rendering. This could be because they’ve been defining the look of our film for the last 80 years, or it’s from how they order and process the color pixels on the X-Trans sensor. They say their sensor pixel configuration makes it render colors more accurately.

Here I’m using Adobe Standard profile in Lightroom on both cameras. Colors look maybe a little richer on the XT1 and the Sony A7r has a lot more noise in the reds. 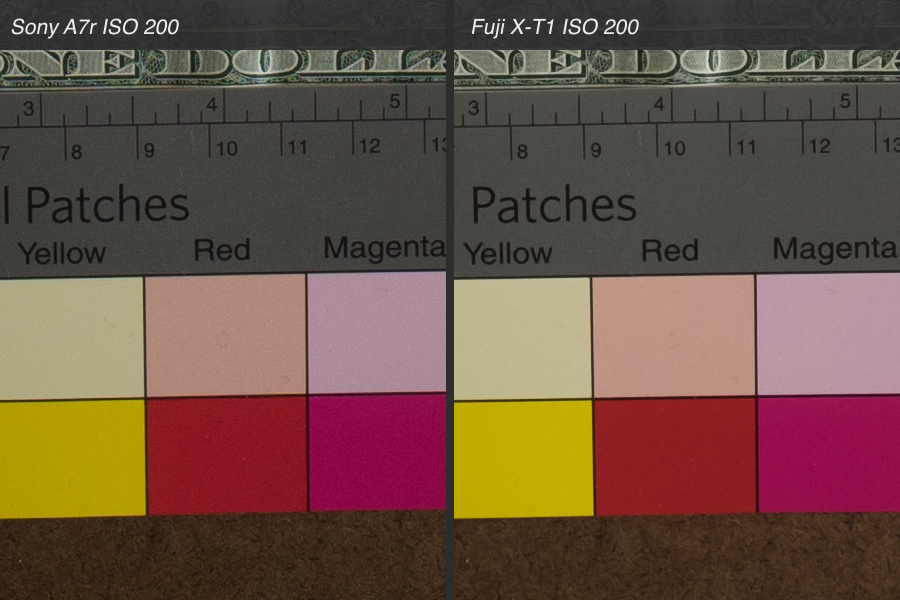 Keeping in mind that this is the Sony A7r placed in APS-C crop mode. By no means a real world test. Had I put a 22mm lens on the A7r and shot full frame with a matched framing, the results would be much different in terms of noise control and detail. The purpose here was to compare the two sensors at pixel-to-pixel level where real estate shouldn’t matter. It’s interesting to see how the two different cameras process their RAW files.

Does Fujifilm Cheat Its ISO?

From this test I have to say no they do not. Fujifilm applies an in camera dynamic range adjustment and pulls a lower ISO to recovery highlights when needed. But when camera settings are all matched and neither shot is over or underexposed, the exposures will be the same. Myth, busted!

UPDATE: There have been so many awesome comments left by people smarter than me that I thought it would be fair to update this post and explain a little bit more about why the Fuji XT1 appears to perform better.

From what people have been saying Fujifilm applies some significant color noise reduction to their RAW files and from what I’ve read around various forums, Sony applies some significant sharpness to their RAW files. So what you’re seeing at ISO 6400 is sharpness stacked on top of noise for the Sony, but noise reduction added to the Fuji. This gives the illusion that one sensor is out performing the other. From what people are saying, Sony actually produces the X-Trans CMOS II sensor, so the results should be similar except for the difference in the color pixel array.

However, I’ve applied color noise reduction to the Sony ISO 6400 to try to match the FujiXT1 and I still can’t get the same level in shadow detail as I could with the XT1, but the results came close. I imagine the XT1 is applying a noise reduction pass perfectly tuned for the sensor, so you’re likely to get better results than just using Lightroom.

My take away from all this is that you have two RAW files that are geared for two different users and it comes down to preference. Would you rather apply noise reduction yourself in post and have a sharper image at low ISO, or would you rather have a cleaner image at high ISO to start with?  For me I would rather have clean high ISO since sharpness is a lot easier to apply than noise reduction. And I think most average Joe photographers would prefer this as well.

Fujifilm has also cleverly added automatic dynamic range and highlight recovery to their system, allowing the camera to push or pull the ISO as needed which gets you more mileage out of your sensor.

The good for everyone is, both sensors do still produce great results and some new technology like back illumination is in the Sony A7rII. And if Sony provides Fujifilm their next sensor, you can bet back-illumination will end up in their next generation of cameras as well.

Thanks again for everyone who left awesome comments. I’m doing the same thing to compare the Fujifilm XT1 to the Samsung NX1 and I will try to apply what I’ve learned from all of you into the next article.

This test is 100% honest, I am not in favor of one system over the other. I love my Fujifilm cameras and I love my Sony cameras. They’re just different and I’m very excited about the new Sony A7rii and the rumored Fujifilm X-Pro2.

Do you think the Fujifilm X-Pro4 will get IBIS?
3 days ago
Follow