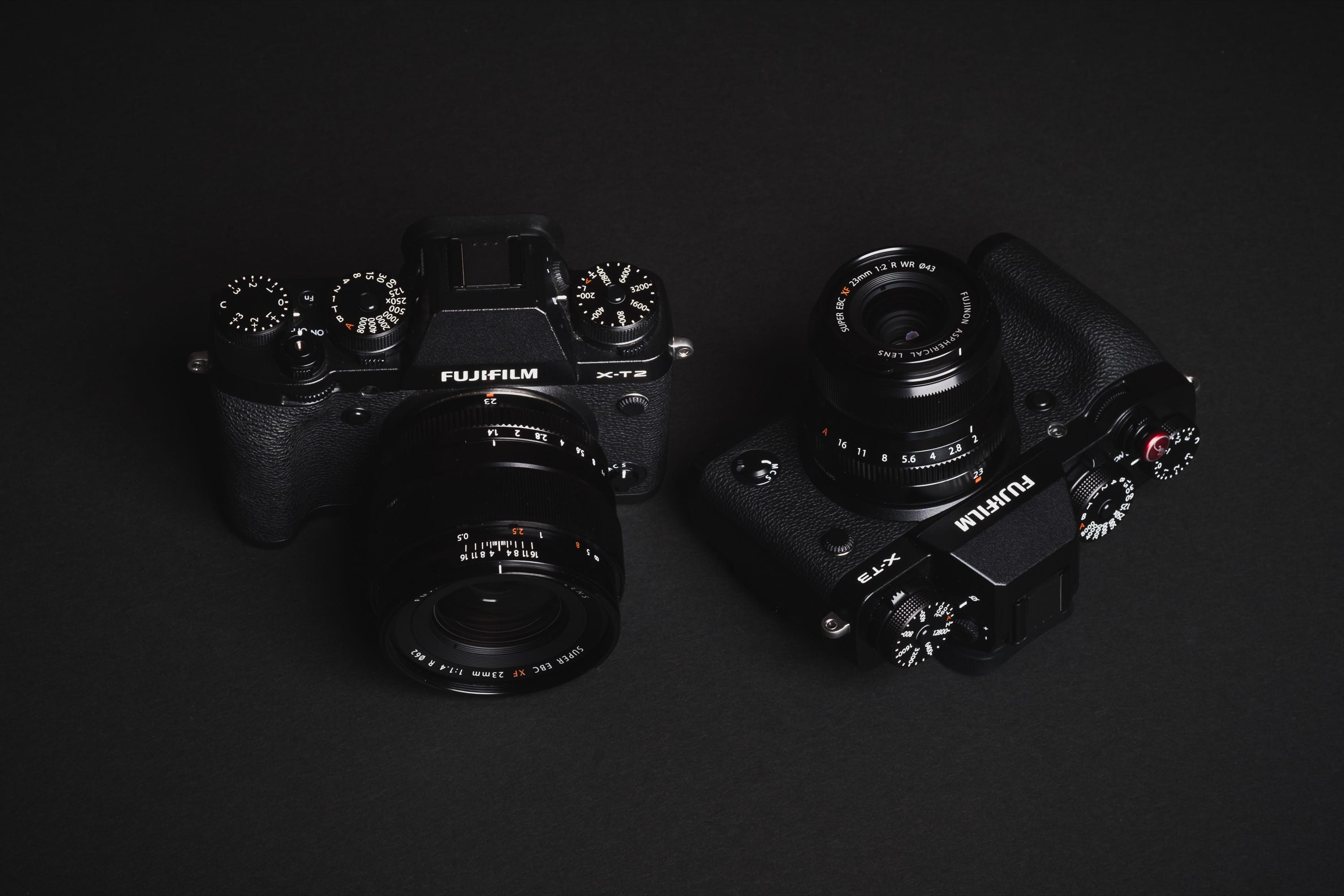 If you are on the fence about which lens to buy, the Fujifilm 23mm f1.4 or the Fujifilm 23mm f2, this comparison will guide you through the differences between the two. I also share my personal take on which lens I prefer and for what since I find them both useful, but for different situations.

It might seem like the Fujinon 23mm f2 is a stop slower, but it actually has a lot more going for it in terms of specs. 9 aperture blades vs 7, weather sealed, silent focus etc. The 23mm f2 is really more of a casual lens while the 23mm f1.4 is more of a pro portrait lens.

Both lenses are very sharp but the Fujinon 23mm f1.4 is a touch sharper in the center. The f1.4 does however suffer a bit more from diffraction at those higher apertures. This could be because my lens is older now and has some dust inside.

Corners are better on the 23mm f1.4 but not by a lot. The f1.4 lens does have less of a shift in the colors and isn’t hit as hard by vignetting. At f2, the Fujinon 23mm f2 performs better when looking at sharpness alone.

This is my second copy of the Fujinon 23mm f1.4 and my last copy (before it died) was a little bit better in the corners. My new copy is very slightly decentered so it may be possible to get better results than this with a new 23mm f1.4.

Here is a closer view of each lenses sharpness chart as seen on their review pages.

Both lenses have a very minor distortion. I stripped the in-camera profile corrections in Iridient and do not see any artificial distortion correction on either lens.

The 23mm f2 has some very subtle distortion, while the 23mm f1.4 has almost no distortion.

While both lenses look to have very little vignetting, you’re not seeing the full pictures. The in-camera lens profile correction is removing most of the Fujinon 23mm f2 vignetting, which is not great.

While you might be thinking that the camera removing the vignetting is a good thing, you’ll have to realize that by removing the vignetting, the shadows are essentially being lifted in those edges and you’ll get less dynamic range and tonal details that could affect the quality of your images if you need to lift the exposure.

You’ll have less ability for shadow recovery along the edges and corners with the Fujinon 23mm f2 because of this correction.

For most people, this won’t make a difference, but if you’re shooting low light photography it will affect your dynamic range along the corners and edges at those faster apertures where it’s a problem.

This is vignetting wide open with the lens profile correction removed. It’s mostly gone on the 23mm f2 lens by f4. The Fujinon 23mm f1.4 looks great by f2. My vignetting is a little uneven here because I was shooting the sky.

Since sharpness and corner sharpness is mostly comparable as well as distortion, the difference between these two lenses is down to the bokeh and low light performance. This is what you’re paying more than twice the money for.

f1.4 is a full stop brighter than f2. You’ll also get much shallower depth of field, which you can now calculate using the depth of field calculator.

In terms of bokeh style, you’ll notice the Fujinon 23mm f1.4 has a cleaner smoother bokeh when wide open. The 23mm f2 has nice bokeh as well, but in some situations it will produce some coma and give you a swirling effect. Sometimes this is cool, sometimes it can be very distracting.

The Fujinon 23mm f1.4 has pretty nice bokeh balls along the edges while the 23mm f2 has some pretty noticeable coma. You’ll also see some minor swirl on the 23mm f2 but it’s not as bad as the Fujinon 35mm f2 or the 50mm f2.

When looking at image fidelity at f5.6 and mid apertures, the 23mm f2 actually has slightly better color rendering, contrast and also better micro-contrast than the 23mm f1.4. This is actually something I noticed right away without even doing side by sides. Images just pop off the screen with almost a 3d realism with the f2. This makes it look like the 23mm f2 images are sharper because of the better tonal depth. Keep in mind, the difference isn’t huge, but it’s there.

When comparing both lenses wide open, the results are a bit closer.

What this means is if you’re looking to buy your first prime lenses after shooting with a zoom, the 23mm f2 will give you a good demonstration of the quality and beauty of prime lenses over zoom lenses without spending a ton of money.

The Fujinon 23mm f2 tends to also render a little bit warmer. I did shoot all these samples side-by-side with the 23mm f2 on the X-Pro2 and the 23mm f1.4 on the X-T2, so I’m not totally sure if this is from the camera or the lens.

You’ll also notice in these samples that the 23mm f2 produces an image that is a few mm wider than the 23mm f1.4.

These are half-size and I corrected color temperatures to match, but you can see how the f2 has a little bit more punch at f5.6. 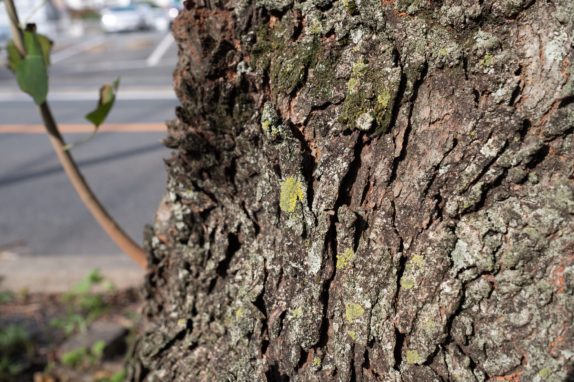 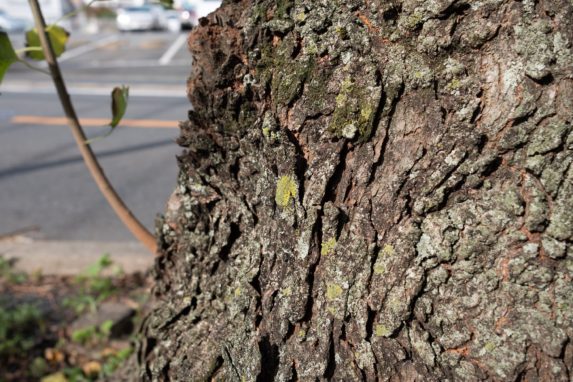 Mechanically the focus system between the two lenses works completely different. With the 23mm f1.4 lens, front barrel expands when focusing where as the 23mm f2 focuses an internal element.

Autofocus on the older 23mm f1.4 uses a high-torque DC coreless system where as the 23mm f2 uses a completely silent stepping motor.

The difference is the old High-Torque DC Coreless is a bit slower. It hunts and pecks a little more, misses more and makes more noise. The Stepping motor on the 23mm f2 is almost instantaneous. It’s noticeably faster and will also be much better for video since it is silent. The 23mm f2 should also have the latest focusing micro-computer which is said to help with contrast detect autofocus.

The 23mm f1.4 speed and acquisition is fine for most styles of photography, I do like to use my 23mm f2 when shooting my kids all cracked out on sugar as AF-C is noticeably snappier. It really makes a difference when you’re talking about shots that are almost in focus vs shots that are perfectly in focus. You’ll especially notice it if you’re on the X-T3 and using eye tracking as your subject is running towards you. But again, portraits, wedding, landscape the 23mm f1.4 is fine especially with the X-T3 which fixes a lot of the hunting and pecking.

When switching between manual and autofocus on the 23mm f1.4, the focus ring snaps into the different modes. When the lens is in manual focus or autofocus mode, you will only be able to use that mode no matter how you have the camera set. A few Fujinon lenses are like this and it’s a little confusing to get use to.

With the 23mm f2, auto focus and manual focus is controlled by the camera and there are no settings on the lens.

Both lenses have a fly-by-wire manual focus system. With the X-T3, you can set this up to be linear focus which allows the lens to function more like a manual focus lens. When trying to focus with precision, you’ll still see the little steps as you adjust focus which makes extreme precision difficult.

The difference isn’t huge as the minimum focus distance on the 23mm 1.4 is still pretty good. But here’s the thing; if you’re closer and focusing on small objects, you can get the Fujinon 23mm f2 to have more extreme bokeh than the 23mm f1.4 even though the f2 is a full stop slower simply because those few inches will allow for a shallower depth.

So if you’re shooting subjects extremely close to the lens, the Fujinon 23mm f2 will actually give you shallower depth.

Here is a sample.

While I’m sure there is some chemist that works at Fujifilm that could tell you the difference between these two, in real world shooting I’m definitely not seeing one. 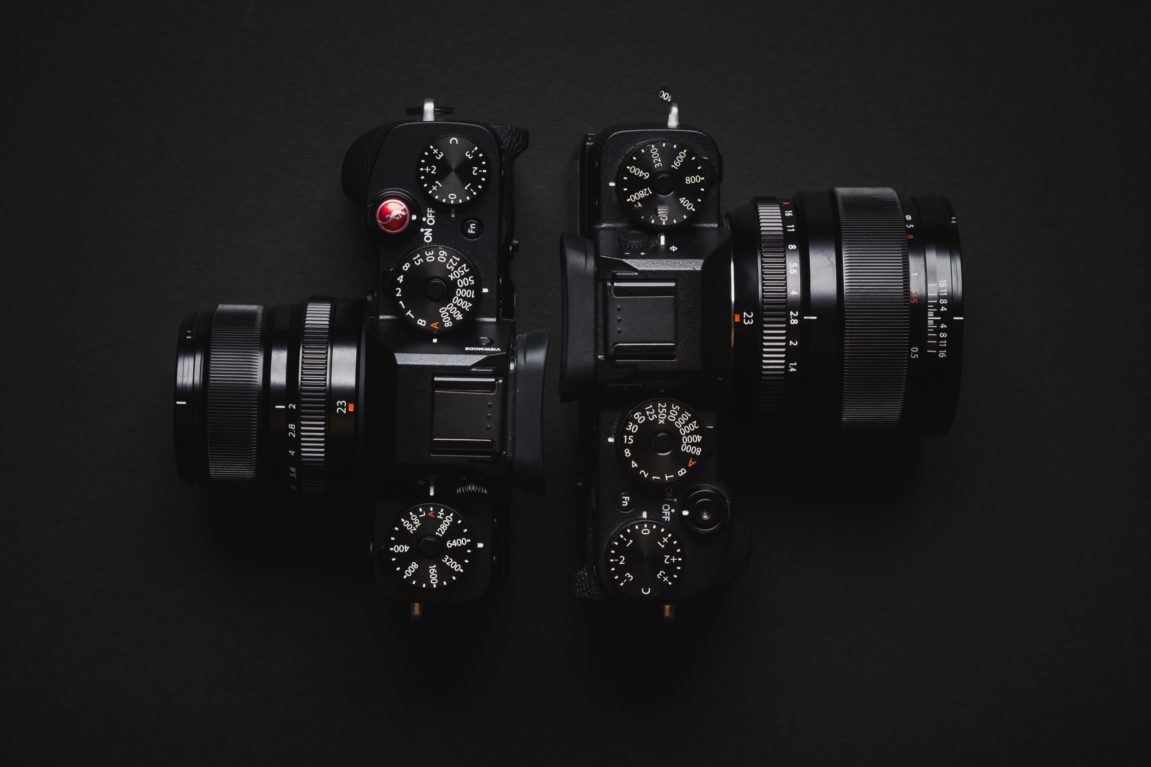 When comparing the two lenses physically, build quality is noticeably different. The 23mm f1.4 is bigger, it’s heavier, from my experience it’s more fragile. The 23mm f2 is noticeably smaller and lighter and won’t tip over your camera from being too front heavy when set on a desk. It’s also weather resistant making it a great adventure lens. The 23mm f1.4 also has the autofocus to manual focus clutch mentioned above.

I’ve dropped my 23mm f2 Fujinon lens on concrete from waist-high without any terrible consequences. While I don’t recommend doing that, accidents happen. If you drop your 23mm f1.4 from waist-high while it’s in a backpack, like you open the back of your SUV and your backpack falls out with your lens somewhere inside . . . expect the worst. 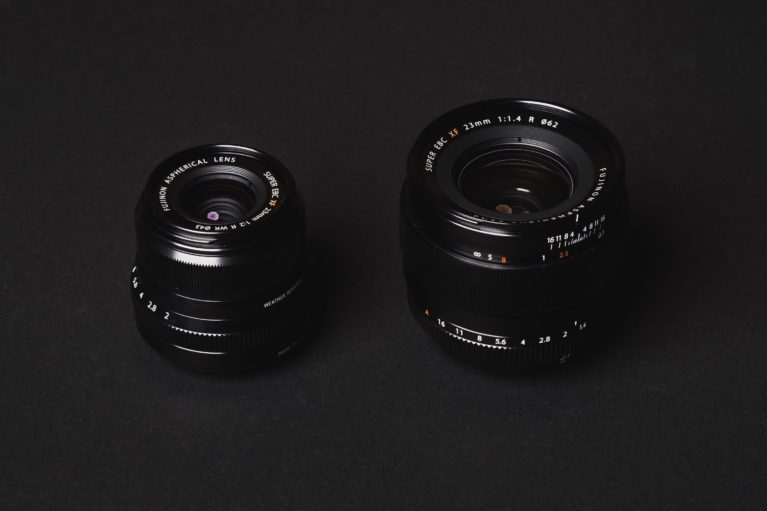 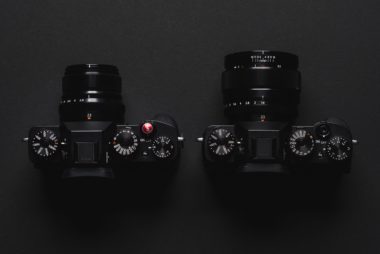 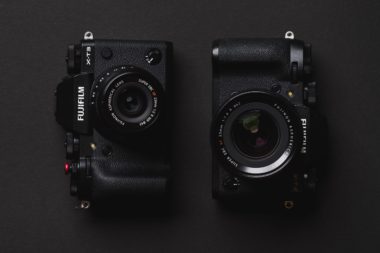 My first 23mm f1.4 started having element issues and stopped produce sharp images when wide open after a few months. My backpack once fell out of my car with the lens inside and I use to cycle with it in my back back, so vibrations and impacts are not friendly to this lens. So be careful with that one.

I always make sure I have good copies for reviews, so your lenses should perform as good as what I’ve shown here. 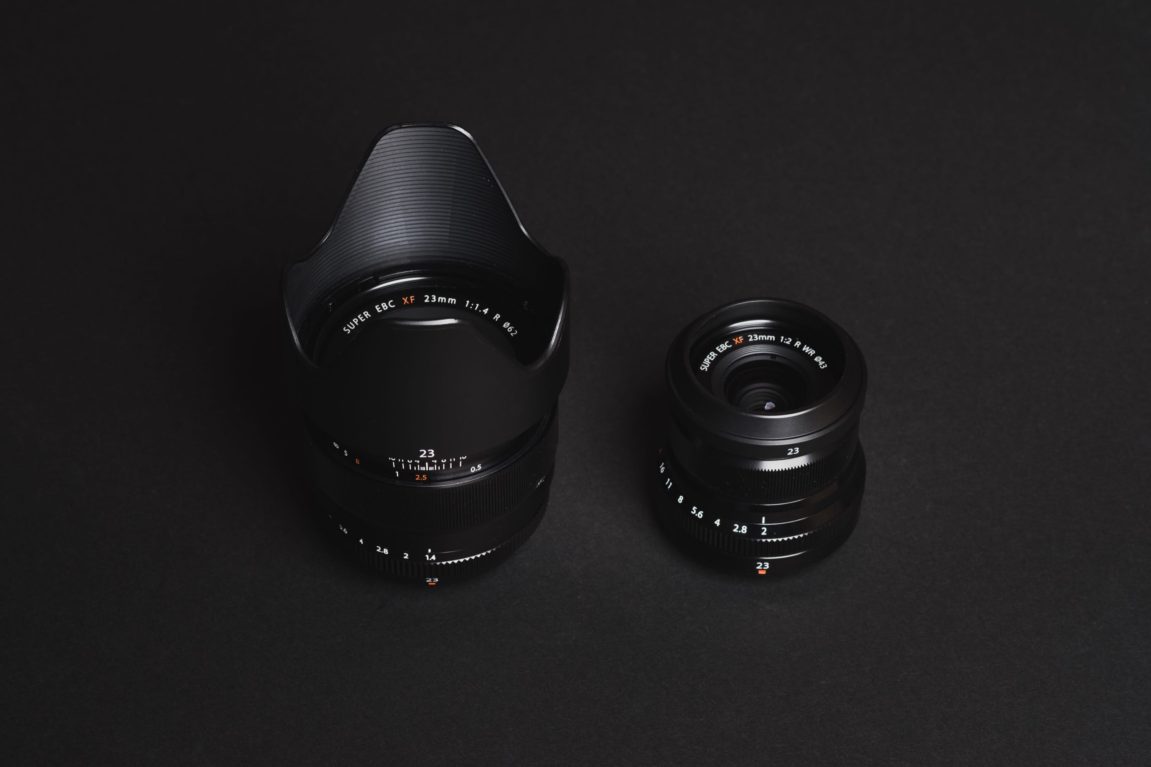 If you’re on the fence between these two lenses, your decision should depend on what style of photography you shoot and what you plan on using the lenses for. A lot of people may actually want both lenses.

If you’re solely want to shoot photos for the sake of art and don’t mind a lens that’s slower with autofocus, heavier and a little less resilient, then the 23mm f1.4 will be the lens for you. It’s also better in low light.

If you need more of an adventure lens, have kids and just need to get the shot, while still having a lighter build and weather sealing, the 23mm f2 will be the obvious choice. It’s such an incredible value. You get a silent, incredibly fast focusing weather sealed lens with amazing color and pop for around $400.

Before I had kids, I found the 23mm f1.4 to be fantastic, it’s all I ever needed. Now I have two kids, am biking more and am doing a lot more run and gun shooting to capture daily life and street photography and I’m finding myself grabbing the 23mm f2 lens more than the f1.4.

I also shoot frequently at slower apertures to get more of the scene in focus for landscape or street style photography. At the slower apertures like f5.6, there really isn’t a huge difference between these two lenses. So again, the 23mm f2 makes a lot of sense for me, especially when traveling. 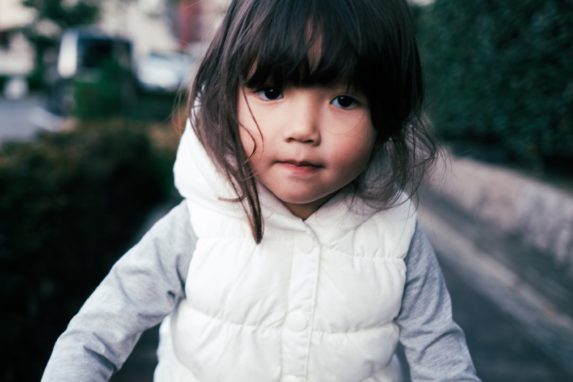 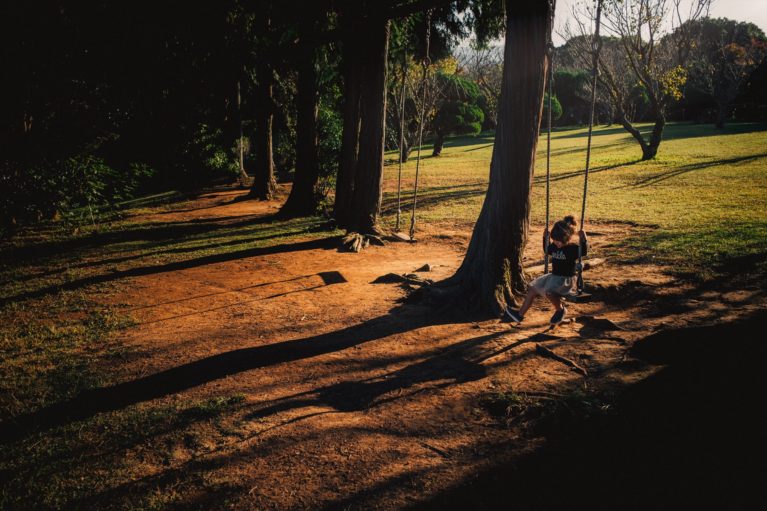 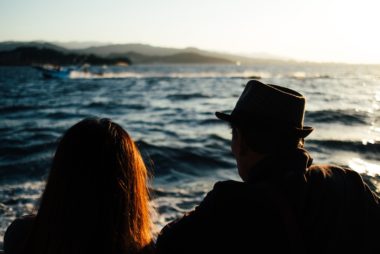 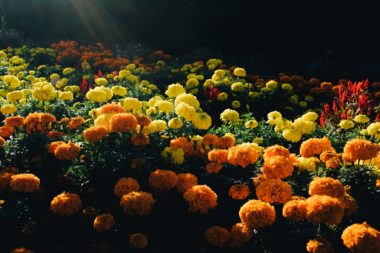 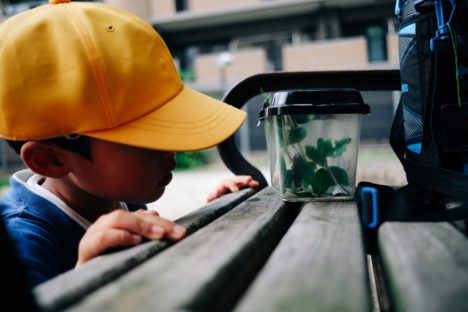 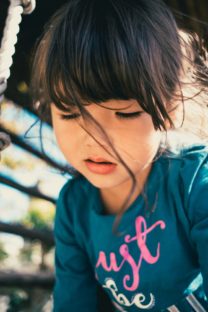 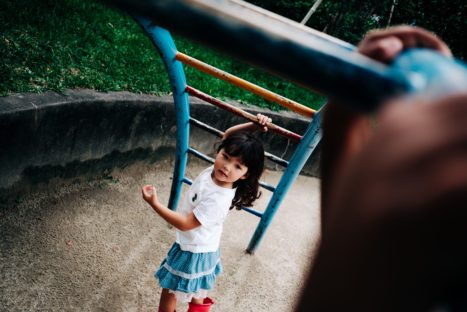 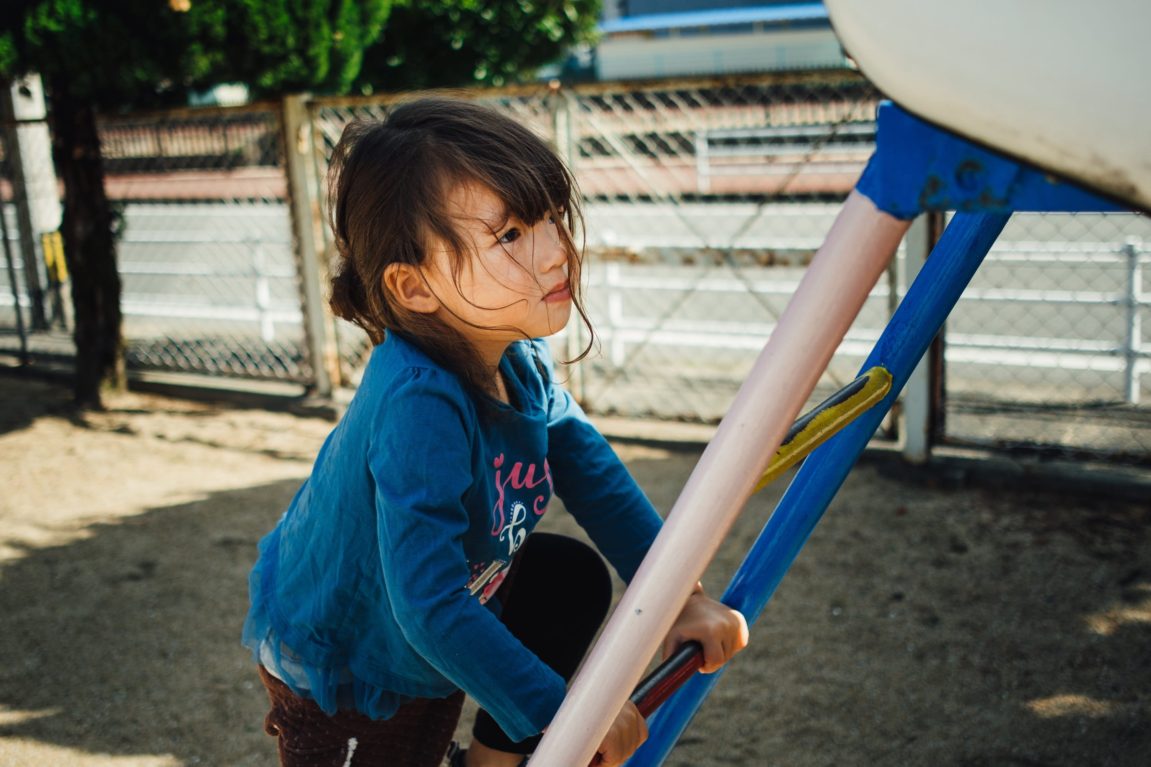 @AlikGriffin
224 Following
404 Followers
Also not allowed to discriminate against unvaccinated or coerce anyone into a vaccine. But when I fly back I get… https://t.co/niLv1XsqRW
16 hours ago