Currently, the largest capacity CFxA card you could get for your Sony camera was 160GB. With the 600Mbps bitrates of Sony cameras, this left you with only around 30 minutes of record time. Then for the 50MP files of the Sony A1, high-end photographers could also run into capacity anxiety during their shoots.

These new 320GB cards could be the solution to this capacity anxiety Sony shooters had with the 160GB cards.

Currently, Lexar is offering it bundled with their reader. Also looks like their lower-capacity cards are currently on sale.

Lexar has sent me this card and the benchmarks look great.

The new Lexar 320GB card is actually running a little faster than the 160GB Lexar card which was already the fastest CFxA card, so it’s good seeing Lexar breaking their own records.

This card is also VPG 400-rated. This rating is kind of like the v90 or v60 ratings with our UHS-II cards, except this new rating guarantees a 400MB/s write speed. This new car also comes with a minimum sustained speed of 700MB/s.

The Lexar CFxA 320GB card can be bundled with the Lexar CFxA reader, a really nice reader that also has the new interface for the UHS-II cards. Remember for a long time Sandisk had those 170MB/s cards but nobody could get those speeds? This new reader allows you to get those speeds. I’ve also seemed improved speeds on many of the microSD cards.

Here is the full tracker of available cards and what I’ve been able to benchmark. There are now some higher-capacity cards from some of the other brands, but I don’t have access to them yet, and it does still look like currently Lexar cards are rated as the fastest. 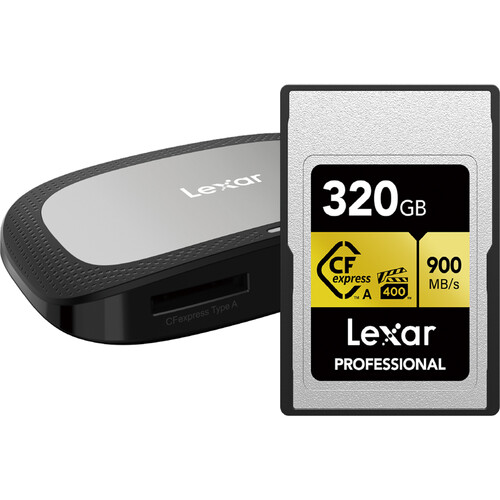 With this new 360GB card, it would actually make sense for Sony to now offer some form of RAW video recording in their high-end cameras since it never really made sense to even offer that with the lower-capacity cards.

As sort of a tech nerd, it’s getting pretty exciting seeing where these CFxA cards are going since Sony’s initial adoption of them with the limited capacities was a little confusing. It put Sony behind all the other brands with speed and functionality and these new higher-capacity cards are leveling the playing field for Sony.

I could see more camera companies adopting this smaller format in the future based on what we are seeing with performance here.