The Canon 7Dmkii like many other Canon cameras now supports UDMA Mode 7 CF card and UHS-I SD cards. But what does that mean and which card type should you use?

I’ll start with the more affordable option. The SD Cards. 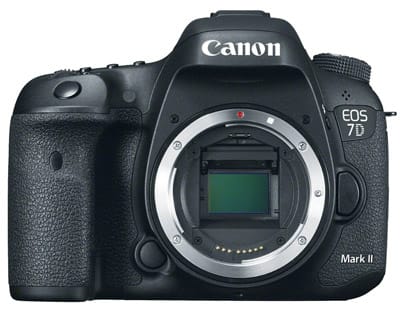 Choosing The Best SD Card For Your Canon 7Dmkii

The Canon 7Dmkii SD card is only supports a UHS-I type memory card so buying a UHS-II card would be a waste of money. One of the main advantages of SD cards over CF cards is price and they are only slightly slower at write speeds than CF cards.

I’m actually really happy Canon added a UHS-I slot to the 7Dmkii along with a CF card slot. On the Canon 5Dmkii the SD card slot was UHS only making it almost completely worthless.

A Bit About Speed. Do You Need A Fast Card?

One of the primary functions of the Canon 7Dmkii is to be a sort of sports action camera. It has 10fps of continues shooting for up to 130 Jpegs or 31 Raw files before filling your buffer – which is about 500MB. Pretty standard these days.

A faster card won’t affect your ability to shoot in burst mode and you’ll likely not shoot sequences over 31 Raw files. But a faster memory card will help you clear your buffer faster. This is important if you’re shooting sporting events and need to keep up with the action.

Great Cards For The Price

Buy one of these if you’re using an SD card as a secondary or backup.

Buy one of these if you’re using an SD card as your primary card.

Largest SD Cards You Can Buy

Great for using SD cards as your back up or for long periods of time away from a computer. I know lots of photographers that like to shoot for weeks without wiping there cards. This is not recommended but it works for them. Especially if you just want to use one card as a backup for a long time.

Here are some speed tests I’ve run on the top selling cards. Sandisk and Kingston seem to be the best performers. These are done with a Macbook Pro to determine raw speeds.

I got more in the mail.

Most people will be fine by only using SD cards. That’s what I use in my Sony A7r and my FujiX100T.

Choosing The Best CF Card For Your Canon 7Dmkii

If you want to go the path of the CF card here is what you should know. Right now CF cards are significantly faster than SD cards somewhere around 30MB/s faster at writing. If you’re a pro and don’t want to risk waiting on your buffer, you should absolutely go CF card. Plus like mentioned above, you should be shooting onto a backup SD card.

Personally I always buy the Sandisk Extreme Cards. After spending thousands of dollars on a camera the last thing you ever want is a problem with your media device because you didn’t want to spend a few hundred extra bucks. But if you’re a hobbyist and bought the 7Dmkii because you have a baby on the way, then just stick with SD cards. Just my two cents.

Also if you are a shooting professional you should shoting with a primary CF card and a backup to the SD cards. Your backup card doesn’t need to be amazing. Just match the size of your CF card or go bigger.

The Difference Between SD Cards vs CF Cards

Should you go with your primary card as a CF (compact flash) or SD (secure digital)?

There are some advantages between the two but it’s very minimal.

People say CF cards are more reliable, but in my ten years of shooting digital photography I’ve never once had a problem with any SD card or a CF card.

The differences really come down to minimum write speeds. But you’ll only notice that if you do a lot of burst photography. Just keep in mind when a card lists speeds of 120MB/s or 160MB/s it’s always referring to the read speeds and really won’t have an impact on your photography.

If have a CF card and an SD card, there are a few really cool ways you can configure them to work together.

Probably the most useful configuration is to use your CF card as a primary and have backups stored to the SD.

Another option, not as useful is to use your CF card as a primary and when that fills up the camera will overflow to the SD card.

Of course nowhere in any of the user manuals or online can you find these features, so I’ll be renting a 7Dmkii soon to give you more information on this.

Whether you’re shooting weddings, the super bowl, or documenting your newborn babies life experiences, it’s important to get the right memory card and not waste money. Professionals should always do a CF and SD card backup. I can tell you stories about how this has saved photographers I have met but I won’t get into that. Just do it. If you’re just shooting for fun, or photography is your hobby and you are not doing a lot of burst shooting, then you’ll be totally fine with just a single SD card. That’s how I shoot with my Sony A7r and it works great.