I’m by no means a professional studio photographer and come to find out, you don’t have to be to get some great shots. So ignore the ego of most photographers, this is actually pretty easy if you already have a decent understanding of photography and lighting. The Photoshop is the hardest part.

So for those that have no idea how this works, I’ll share with you a little on what I do, my gear and how I’ve set it up.

I’ve been using the Paul C Buff Einsteins for the last two years for all my product shots and studio lighting. So far I love them.

There are other great lights out there depending on how much you’re willing to spend and going with Paul C Buff wasn’t an easy decision. I was almost going to pull the trigger on some Elinchrom lights instead, I think they might have a little nicer construction and design, but ultimately decided to go with Paul C Buff because they are here in America and if something breaks, sending them in for repair is relatively pain free and people seem to have a great experience with Paul C Buff in this regard.

So I use two Paul C Buff lights, they’re about $500 each. I use Einsteins instead of the Alien Bees or Whitelights because I wanted a consistent color balance and you can also turn them way down, which is nice if you want to shoot at f1.2 or something without using an ND filter. A lot of other lights don’t have as good of a range from low power to high power as you get with the Einsteins.

To control the lights I bought the Cybercommander. It’s ok, the menu system is pretty abysmal, but it works.

This is actually more important than getting great lights. Most lights you buy will be fine, but the modifiers are what’s going to make the difference.

I only have two modifiers for these lights right now. But I think I’ll get one more soon.

I have a huge Westcott 48″ Octabox – I typically use this as my key light, or to fill the whole room on high power if I’m not shooting with a backdrop. If you put this light really close to your subject, it produces some very even yet soft light.

The Paul C Buff 10″ x 36″ Strip Box – I use this as sort of a fill light or rim light. This is also the only modifier I use for my product shots when I reviewing cameras and gear. In the shot above you can see how I use this modifier to create a nice edge on the left side my daughters face, while also bringing out the texture on her cheek as well as her hair. This is actually why I think I could use a third light, since left side of her hair is relatively lost in the background.

To be honest, I’ve always hated C-Stands. Unless you’re hanging heavy duty HMI lights or other big film production lighting, they’re just a pain in the ass. Albeit, they are nice because they are very durable, you can sand bag them very easily and they stack nicely against a wall, but for this type of stuff I love the Paul C Buff stands, or even the Westcott stands. However, if I had more space I would consider getting a C-Stand or two, just incase I need to hang a big light over a model or something.

I just bought the best backdrop stand I could find on Amazon and it’s been great. It was this one – Amazon. I also bought a roll of seamless background paper in grey. I can’t remember where I got it, I think B&H.

That’s pretty much it. I think I spent under $2000 for all that and I have a little mini studio in my living room to play around with. Pretty fun.

Here the complete list of all the gear I use.

Seamless Background Paper – Not sure where I got it.

I also have a few large reflectors that I’ll use here and there as well as a few extra stands I’ve collected over the years.

I didn’t do a ton of Photoshop on this above shot. The trick is to get as much of it done in camera as possible, but there is a definite look here and I’ll share with you how I got that look. This is actually a pretty popular look.

I start all my photos in Lightroom. Basic tonal corrections, white balance etc. You could just use Adobe Camera Raw in Photoshop for the same effect.

I shot this with the Fujifilm X-T2, so I started by applying a Classic Chrome profile. I actually have a bunch of presets I’ve built that take the base Fujifilm profiles and add unique looks on top.

After that I export to Photoshop.

Since Kalina was sick awhile ago, she had a really crusty red and runny nose, so I wanted to get rid of some of that. I tried for while with different tools like clone stamp and the heal brush, but it wasn’t working, so I did what’s called Frequency Separation. You’ll have to Google that. Phlearn put out a good tutorial on it a few years ago.

After the skin was cleaned up with the Frequency Separation I wanted to further soften the skin. There is a trick I used, I have no idea what it’s called, but it involves using the high pass filter, blurring and inverting it, then applying a blending layer. Here is a pretty good tutorial on softening skin. You’ll have to play with the radius of the high pass and blur filters to get the right look.

I used a lot of Dodge and Burn and contrast to enhance certain features and hide others, This includes adding more sparkle in the eyes and shaping the lighting a little more.

Man, I’ve been using this software forever. It was amazing back when I didn’t know all the Photoshop tricks. Still is amazing. The best part is it’s free now.

I only used a few filters here but this is what really helped enhance this look. The filters I used were the Detail Extractor, which just pulls out all the details and makes the image look super crisp, then I used their Cross Process filter, which does a nice job in adding some color harmony between the shadows and highlights.

Step 6 – Back To Lightroom For Final Touches

You could use Photoshop for final touches but Lightroom is just so much quicker at adding sharpness, grain, gradient filters etc.

I basically just added a bunch of grain, brushed in some sharpness and clarity to her eyes and used some brushes and gradients to crush out the background. I also added a little fade to the image with the curves tool.

When I was first learning photography it was crazy, you had to actually read books and meet other photographers to learn their tricks. No you can learn how to do anything instantly. The best part about is it’s really not that hard.

I’ll try to do more stuff like this as I get some time off. Now that my daughter is getting easier and more fun, I should be able to produce more studio shots with her. Should be a fun year. 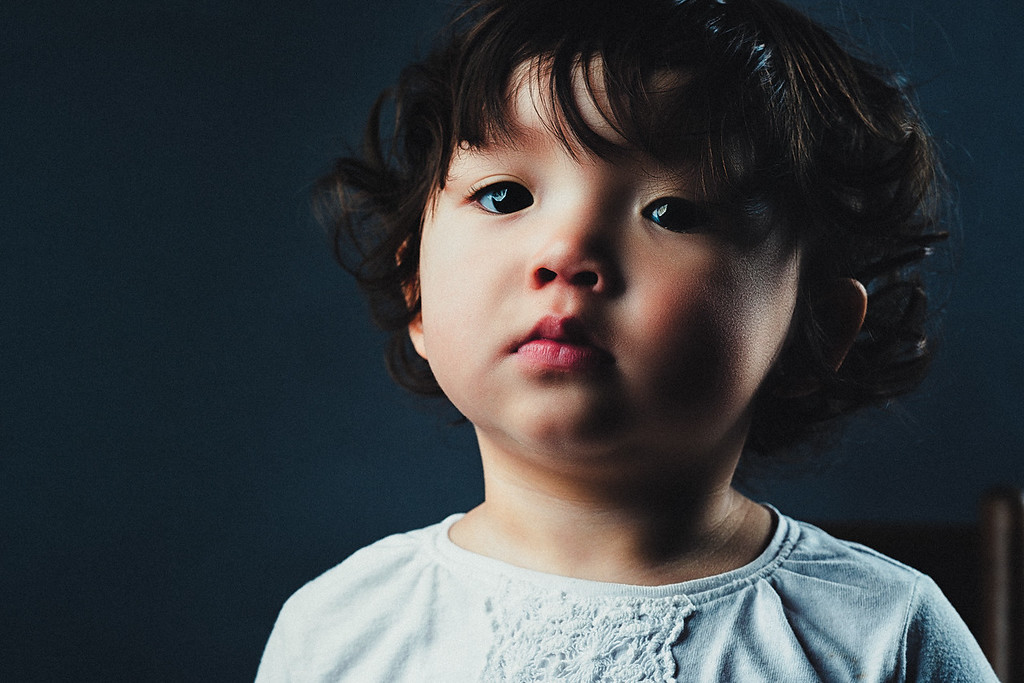