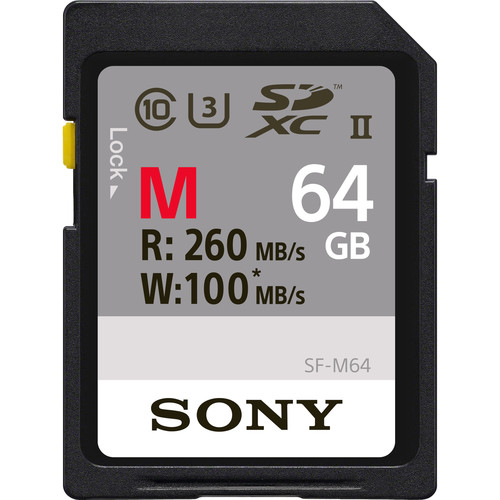 The Sony M series card was Sony first UHS-II card on the market and is a solid card with great performance, but it’s not a very fast card in terms of read speeds compared to the new Sony G cards.

The Sony M card has a max read speed of 260MB/s and a max write speed of 100MB/s. When using this card in most UHS-II cameras you wont be able to maximize the speed and performance of the camera with this card. However, in some cameras like the Panasonic GH5, it will work great because that camera has some write speed bottlenecks.

The main advantage of the Sony M card comes with read speeds. Offloading your data from your card to your computer very quickly. In real world shooting, unless you’re doing a lot of burst photography, this card will work great plus you get the fast UHS-II read speeds.

Compatible with UHS-I devices and is also a great card for recording 4k with Sony’s XAVC S video codec.

Keep in mind the SDHC or 32GB version of the card is only 32-bit and will have a 4GB file size limit.

Learn more about the specs and what all those little symbols written on memory cards mean.

There are a few cameras by Sony that support UHS-II cards, however, the M series card, because of it’s slower write speeds also will perform great in a UHS-I camera and you still get the UHS-II read speeds when it comes to offloading your data from a UHS-II memory card reader. This makes the M series card a great option for those looking for faster transfer speeds, but don’t necessarily need faster read speeds. In simpler words, it’s a great card for shooting video.

To take advantage of the fast read speeds of the Sony UHS-II M card, you will need a USB 3.0 UHS-II memory card reader.