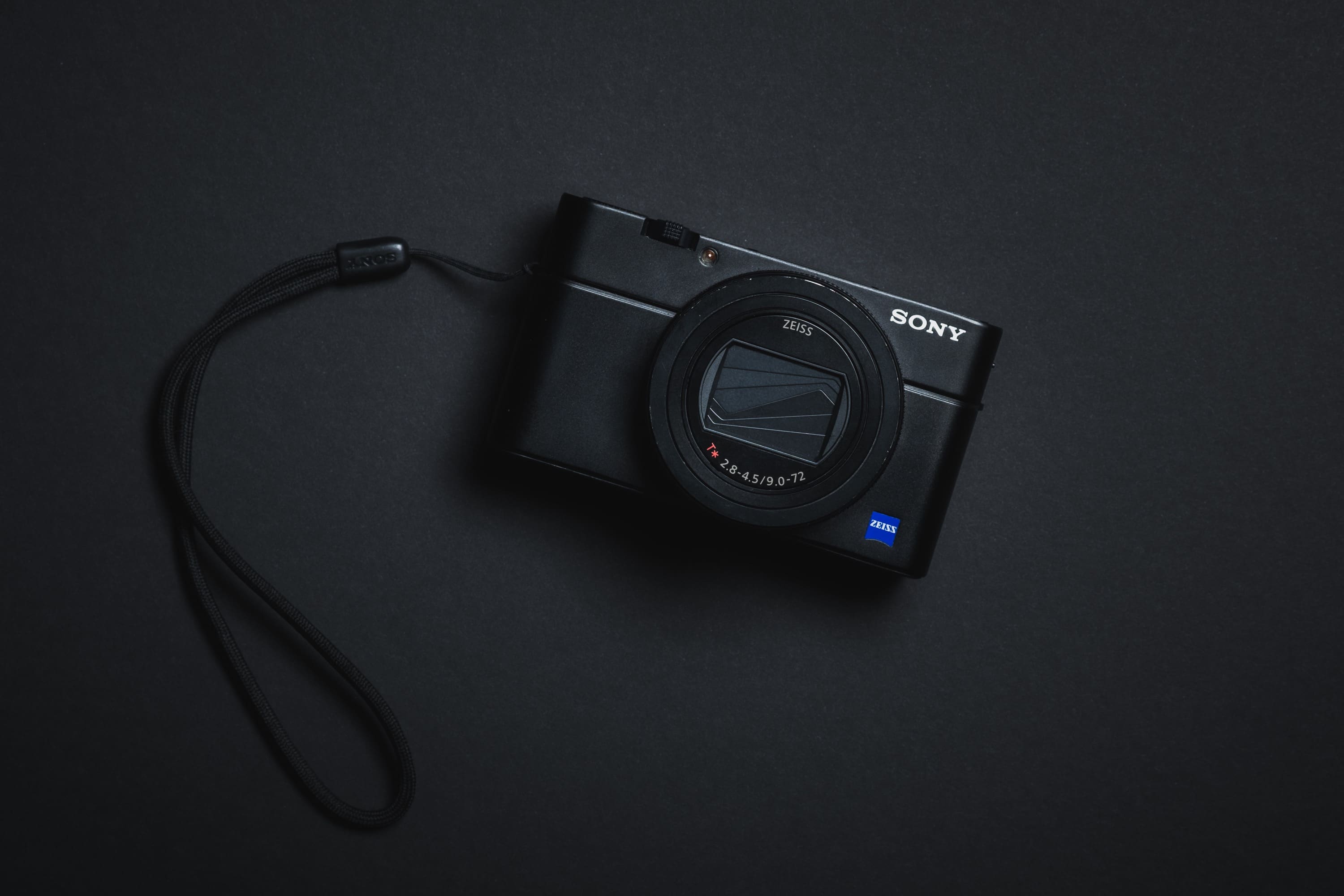 A complete list of memory card speeds and their in-camera performance as well as some great recommendations for video.

Use this guide to find the best memory cards for video or stills with the Sony RX100 VII.

This is the speed chart for the Sony RX100VII. UHS-II memory cards did come out a little bit faster but the few MB/s improvement isn’t worth the cost and this camera does not have the hardware to fully support UHS-II.

I recommend only buying UHS-I memory cards since the Sony RX100 VII does not support UHS-II.

There is one exception, some of the lower end UHS-II cards like the Lexar 1000x still perform very well and often can be found at better prices than the UHS-I cards. One of the big advantages of the Lexar 1000x cards is they still have a fast read speed. This means if you have a UHS-II memory card reader, you can transfer video from your card to your computer much quicker.

Sandisk makes one of the most popular SD cards and their reputation is the best. The Extreme Pro 170MB/s is their latest and greatest UHS-I memory card and they come with a lifetime warranty.

Sony is well known for its UHS-II G cards but their UHS-I cards are actually very good as well. The Sony Professional U3 is often the best performing UHS-I cards in my tests. It’s a little hard to find these days in the 64GB size, but if you see it at a good price don’t be afraid to try it out. 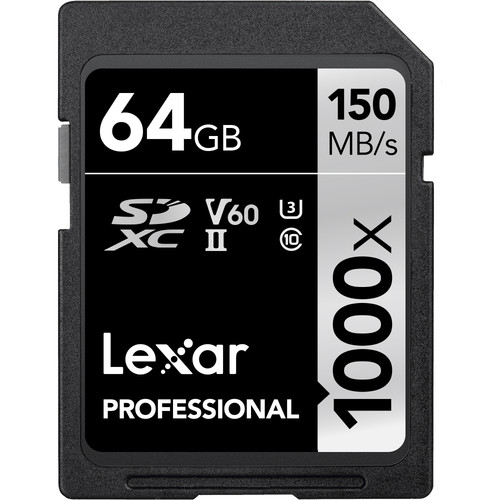 While being a UHS-II card, the price and performance are very good and competitive. I usually tell people to not buy UHS-II cards for UHS-I cameras, but in this case, it’s a great buy. Plus, if you use a UHS-II memory card reader you can get very fast transfer speeds from your card to your computer, but you will see no special benefits in-camera with UHS-II.

Delkin is one of the brands I regularly use in my cameras and I’ve never had a problem with their cards so it always makes my recommendation list. I currently use Delkin XQD cards in my Nikon Z6, and I use dual Delkin cards in my Sony A7rIII. Often the price of this card is very competitive and it’s usually the best bang for the buck. 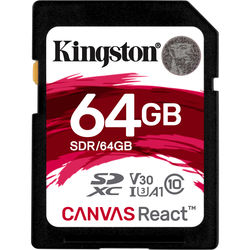 Kingston is a great brand of memory card and they have a few options now at different prices with different levels of performance. Their Canvas React card has been performing very well in various tests and it’s a card and brand I always recommend. The Canvas Go card is also a great option for the Sony RX100 VII if you’re looking for something a little cheaper.

When it comes to specs, all the modern U3 memory cards that I have been testing have been working great for 4k video so all you really need to look for is that rating or better. So any U3, v30, v60, v90 card will work great.

The other rating you need to look at is SDXC or SDHC.

SDXC – This allows the cards to be formatted with a 64-bit file system so that you can have large video clips.

SDHC – With SDHC memory cards the camera will format them to 32-bit, this means video files will be broken up into 4GB chunks.

I put together a nice guide based on specs and my experience to help you decide which size memory card to buy.

For photographers shooting only still, I recommend buying a 64GB card. While I never use more than 64GB in even in a day of shooting, occasionally I’ll forget to clear off my camera before going out to shoot again and having the extra memory is nice.

I also like to leave shots on my cards from the day before until I know they are fully backed up to my server. So if you’re using any sort of cloud-based backup, it’s nice to buy larger cards so you can keep the redundancy while you wait for that backup.

Also, if you decide to record video, the 64GB cards will allow you to record without breaking the video files up into 4GB chunks since 32GB cards can only be formatted with a 32-bit filesystem.

The memory card size for the RX100 VII when recording video depends on what format you are recording and how you plan on using the camera.

There are a few details you should note. Take a look at the max bitrates.

You should be using Avid’s DNxHD if you’re a windows editor and Apple’s ProRes if you’re a Mac editor. Although now there are ways to get Prores working on Windows.

Here is a handy chart you can use to find the best size memory card you’ll need for your recording format. Or how many minutes you can get with the different formats on with different size cards.

For video shooters, filmmakers, I recommend 128GB cards and I highly recommend you clear off your cards regularly for backup.

By the way, is chart is the same for just about all Sony cameras that are shooting 4k.

Unfortunately, counterfeit cards are still a problem and they pop up from time to time at different retailers.

So here is how you can find out if you’re cards are fake.

How to check if your sd card is counterfeit?

If a memory card is a fake, usually it has a hacked controller which will tell you the card is bigger than it really. For example, you buy a 64GB card, you then put the card in your camera and it tells you it’s 64GB, but there is only actually 32GB of flash memory. You might shoot for months or weeks before breaking past 32GB, and when you do, the card will fail.

This is why so many people have memory card failures these days, they’re actually just using counterfeit cards without knowing it.

To see if you’re counterfeit card is a fake the best way to check it so max out it’s capacity the day you buy it. It should get very close to the rated capacity without any issues, if it dies, then return it.

You can do this by copying files from your computer, or by recording video. Not a problem since the Sony RX100 VII no longer has a record limit. Teather it to USB set it to 4k 24 and let it record for an hour or three (depending on the card size). You might not want to do this in a hot environment to avoid the camera stopping from any issues with overheating.

The Sony RX100 VII got a really nice upgrade, removal of the 4k video limit, mic jack, insane autofocus capabilities. It can really do just about anything.

While you don’t need the fastest card to deal with the video specs, you may still want to buy a fast card to clear off that massive 2GB buffer as quickly as possible especially if you’re shooting with that 20fps continuous burst.

UHS-II cards are not necessary for this camera so you can save some money with UHS-I cards. Stick with the U3 or v30 spec and you’ll be able to do anything the camera was designed for.

If you’re not doing a lot of bursting, and just use the camera as a travel or pocket camera, stick with one of the cheaper cards I recommended to save you a little cash, or buy cheaper but with a larger size.

I actually never shoot faster than 5fps on any of my cameras so I usually can’t tell the difference between the slightly slower cards and the best cards.

@AlikGriffin
224 Following
404 Followers
Also not allowed to discriminate against unvaccinated or coerce anyone into a vaccine. But when I fly back I get… https://t.co/niLv1XsqRW
19 hours ago