Right now everyone is blaming the Canon R5 for its thermal throttling but there is a little bit more to the story than what I think people realize and I want to shed some light on some other issues that could come up.

In short – CFexpress cards thermal throttle when they get hot.

This isn’t something a lot of people realize since CFexpress cards are new and there is no great way to see this if you’re just casually shooting. But I do a lot of memory card tests on this site. A lot. I test every camera, every card.

I spend about half my time on with his blog doing memory card tests and this is something that comes up occasionally with CFexpress cards, which sometimes can make it difficult to get accurate rates with the cards with my memory card speed tests.

Being the nerd I am, I wanted to see how much the thermal throttling of CFexpress cards could affect the performance of a camera like the Canon R5.

This is a little difficult to test for since CFexpress cards write so fast and many of the tools like the Black Magic Speed test only let you write 5GB at a time, which gives the card enough time to cool as it reads between cycles. You also have to make sure you have a good source to transfer from and a fast CFexpress card reader. I use the Prograde USB-C reader.

Here is what I came up with.

I ran into a few little problems trying to test the thermal throttling with CFexpress cards, but found a workaround.

First, The Problems & The Test

While you can let both programs run indefinitely the problem is that the writing is what generates the heat and I was struggling to put down a long enough write process on the card to heat it up enough to induce thermal throttling (in my air-conditioned apartment). Since the tests do a read and write cycle, the cards were able to cool enough during the read cycle to maintain normal functionality.

What I had to do was to do a long transfer from an SSD drive to the CFexpress card, then run the Black Magic Test to see how the hot card performs.

Could I have just done a file transfer and check the stats that way? I tried this but the write speeds were all over the place. They’d start off at 300MB/s then drop down to 17MB/s then bounce up to 90MB/s. The types of files I wrote to the card would also affect performance. Could be some OSX issue, I’m not sure.

After running file transfer for only a few minutes then testing the cards with Black Magic Speed tests, sure enough, it was thermal throttling down to around 188Mb/s. I’ve seen it lower, but I ran the test a few times and this number was a nice consistent range of around 190MB/s. The cards are supposed to thermal throttle to 200MB/s so this makes sense.

I then let the card cool for about a minute and ran the test and was getting speeds of around 305MB/s.

Once the card was totally cooled, after about five minutes it started running at its normal 480MB/s. 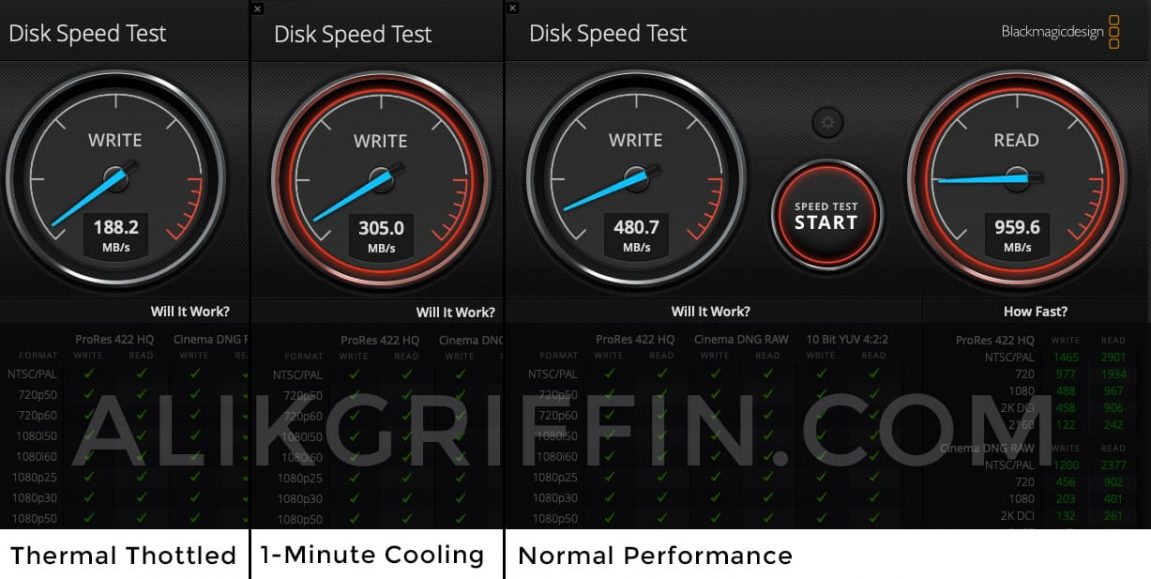 Note that different cards from different brands have different firmware to control the thermal throttling. If this is part of the problem for Canon’s heat issue with the R5, then some of these card manufacturers should state on their product pages the thermal throttling limits of their cards. But we just don’t really know what’s going on inside the R5’s hot little bod.

I’ve seen this 200MB/s rating before, but I don’t know which cards and which brands throttle more or less. When I get some more CFexpress cards I can test for this with my oven test, aka summer in southern Japan.

Before we all run out and rip at Canon for “not developing better technology,” there is some potential here that some of the thermal issues (not all) could actually be from the CFexpress cards, which could be entirely out of Canon’s hands.

In the future, what I’m going to try to do is figure out exactly which modes cause thermal issues in the Canon R5, and see which bitrates they run at. But until I have the camera, I’ve broken down this chart based on the information I can find online.

There is a way to test this when we get the camera in-hand by recording 8k to the lower IPB mode to UHS-II to see if the thermal properties change at all.

Unfortunately, I don’t have the bitrates for all the different frame rates. There also isn’t a lot of great information as to which modes cause which heat problems, testing is required.

It looks like the only modes that could be hit by the thermal limits of CFepxress cards are the 8kRAW and the 4k120Mbps modes.

Future CFexpress 8k cameras might have to limit the video bitrate to around 200MB/s which is about 1600Mbps. Which is still very good.

To see more stats charts and all that fun stuff, check out my Canon R5 Memory Card Guide. You’ll be able to find great CFexpress cards and a nice list of all the best readers there.