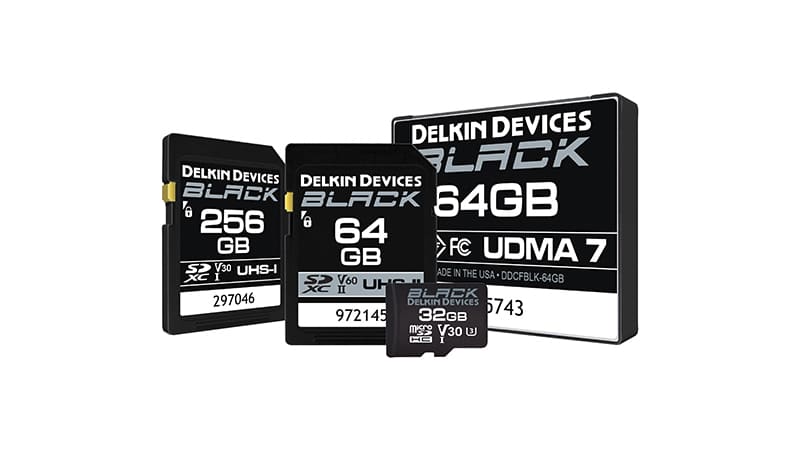 Right now their cards are structured in three tiers, Prime, Power and now Black being the top-tier tough cards.

The Delkin Black series has a rugged design that can withstand 45 pounds of impact.

They utilize a proprietary injection molding which makes them 3x stronger than regular memory cards and they say these cards are virtually unbreakable. . . Unless they are hit with 46 pounds of force?

The biggest thing that I’ve seen kill cards is the write protection switch. It is the weakest point on any card and I’ve had them fail in the past or the switch just gets corrupted in the protected state. This won’t kill your data, but it prevents you from using the card in the future.

I understand wanting the switch if you’re batching through cards as a wedding photographer so maybe you’ll want to just use these Black cards as your backup.

The Black series is available in CF, UHS-II, UHS-I and Micro SD formats.

The new Black series is coming with a 48Hr replacement guarantee with a limited lifetime warranty.

I will order these and add them to my memory card speed tests. I won’t test too many older cameras except for what I already have but I will add them to new cameras I haven’t yet tested which include the Fujifilm X-Pro3, X-T3, and the Nikon D780.

I would assume they’ll perform identically to the Delkin Power cards similar to how the Sony Tough G and the Sony G cards have identical performance.

It will finally be nice to recommend another card besides just Sony Tough cards as the best option for UHS-II shooters. I have always loved the Delkin cards and their lifetime warranty and I currently run a dual Delkin setup in my A7rIII. Now it would be nice if Panasonic would update their GH5 and G9 firmware to be a little more friendly to the Delkin and Lexar cards so they stop getting bad ratings.

Here is a stress test posted by Delkin. It was interesting to see how well the Hoodman cards did. I wonder how they would fair against Sony Tough cards.