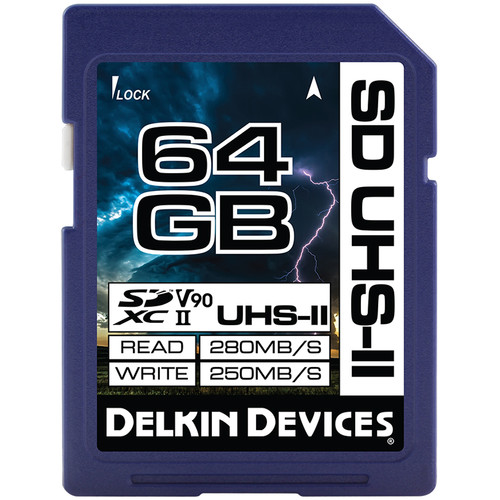 The Delkin V90 UHS-II 280MB/s card has always been a solid card and a great bang for the buck. This particular model is rated at  V90 Video Speed Class. This means the card is guaranteed to put out a minimum write speed of 90MB/s.

While the Delkin memory card doesn’t always perform as quick some of the other brands when it comes to USB 3.0 read and write speeds, it does deliver on in-camera speeds and is often faster than even some of the best cards from Sandisk and Lexar. This makes the Delkin card a great choice for UHS-II shooters.

I recommend check both BHphoto and Amazon prices as they can be significantly different.

The Delkin V90 UHS-II has some great read speed performances when tested via USB 3.0 in Windows 10. However, they are slightly slower than some of the best UHS-II memory card brands, like Sony and Sandisk.

To take advantage of the super fast USB 3.0 read speeds of the Delkin V90 card you’ll need to get a UHS-II compatible memory card reader.