I’ve recently had to make the switch over to Premiere CC on my home Mac Pro, but my old 2009 tower didn’t cut it. You need a Nvidea GPU with at least 1GB of video ram to use its Mercury Playback Engine. So in order to get more life out of my old Mac Pro I upgraded its graphics card.

Not only will a new graphics card give you support for the Mercury Playback Engine and CUDA, but it will also enhance many tools in Photoshop.

Upgrading Your Graphics Card On An Old Mac Pro

A few years ago you couldn’t just upgrade your graphics card in a Mac. You could only use very specific cards that were supported by the OS that sometimes used custom drivers. Or you had to buy the way overpriced Mac specific EFI cards.

But today with the new Mavericks OS, Apple and Nvidia have added support for most modern 3d cards. You can literally get just about any card you want, keeping in mind that you have to power it. 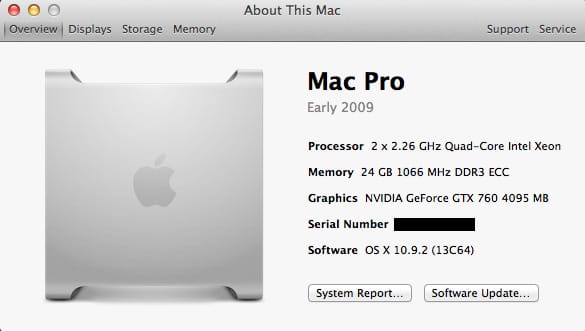 Powering The Cards – What You Need To Know

A Mac Pro doesn’t have a traditional power supply units like a PC does.

There are however two 6-pin mini PCIe power plugs built into the motherboard. As long as you get a graphics card with one or two six pin PCIe power ports you should be fine. 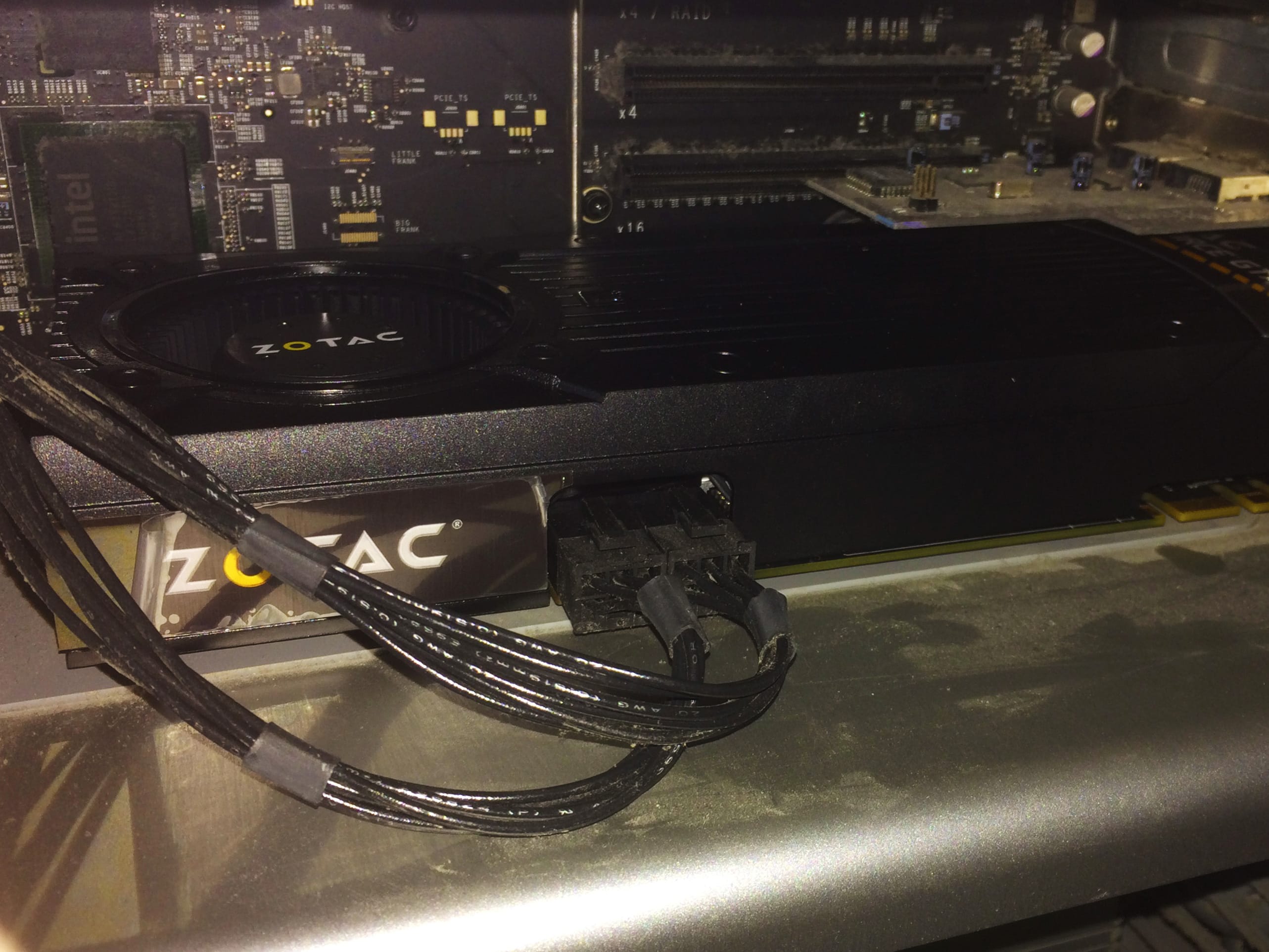 This only poses a problem if you want a faster Overclocked card. Many of them now have at least one 8pin power ports. I’ve seen many people get the 8 to 6 pin adapter, but that’s risky and you may pull too much power from your motherboard resulting in damage to your Macpro, or an underpowered graphics card. 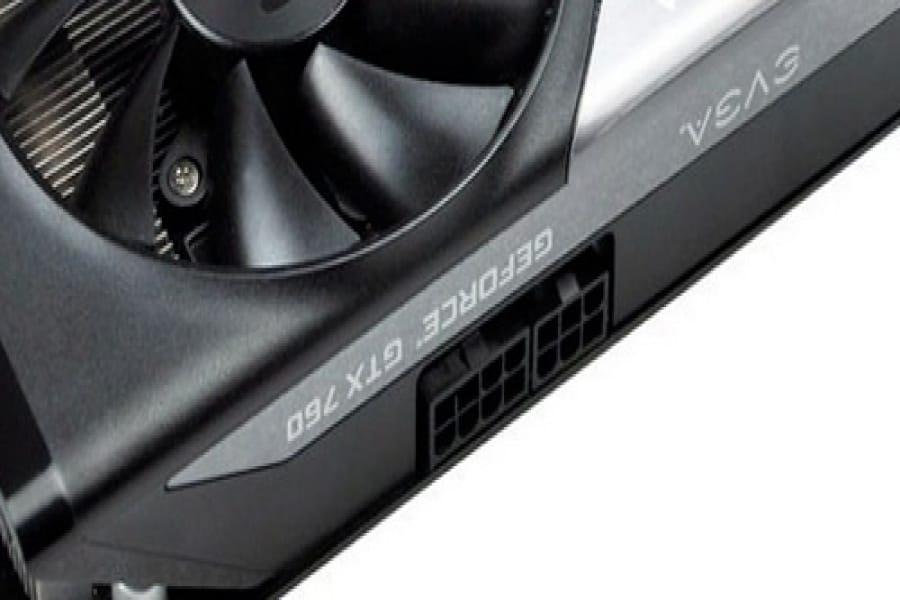 If you still want a more powerful card or one that is overclocked there are a few solutions. You can order a Sata Power to Molex, or PCIe adapter, and use one of the ports designed to power your internal hard drives, or your second superdrive. You can run one of these into your 6 pin, and run your 8 pin into a two 6 pin mini split. (which should come with your card)

Or, if you want to play with fire. Get an 8 pin to 6 pin adapter. I’ve seen people do this without problems. I personally wouldn’t.

Your card should come with a 6pin to molex adapter.

I’ve also seen people buy external Power Supply Units, or use an old one from an old PC (we all have one in storage somewhere). This works as well and you’ll just have to sit it outside your box and rig a few plugs to make the power supply constantly on. Just make sure you get one with enough power.

In the comments Freddy has shared with us some information on how he did it this way.

Here is what he used.

But in order to get the PSU to work you’ll need to bridge 2 wires from the main connector.

The Simple Method – What I Did

I personally just bought a card with two six pins to save myself from trouble. I needed my superdrive sata power for my external USB 3.0 card and I was out of hard drive ports.

I would really recommend just getting a card with one or two 6 pin ports on it, save yourself a headache. Each 6pin port will give you 75w as well as the PCI slot which is a total of 225w.

Keep in mind that all these cards score relatively the same for Adobe Premiere CS6 benchmarks.

You might need two of these depending on what was in your computer prior.

I personally use the ZOTAC, and the agency I work for also has put it in all there Mac Pros. No problems so far.

You’ll only need one adapter.

Slightly faster than the 760, but more expensive.

Installing is simple, power you’re computer off and unplug it.

Then you just plug your 6pin to 6pin mini into motherboard and card. And install the card. That’s it.

There are a couple of ways of doing this, you can check out the forum on Adobe here.

You can download a text file which has links to Adobe CS6 Files. If you’re on CC, just replace the type “CS6” with “CC”

The only draw back is you won’t get a boot screen. The card won’t be read by the machine until it loads Mavericks with the drivers since it’s a Non-EFI card. (Extensible Firmware Interface) Mac specific cards have special firmware that is EFI so it can talk directly to the hardware. It was a firmware developed by Intel designed to replace Legacy Bios. Apple uses this technology, but Nvidia currently does not.

This presents a problem if you’re using bootcamp. You can no longer boot to different systems with the on-screen interface. You have to go into your systems settings and change your targeted boot drive every time you want to boot into a different system. Not a huge deal, just requires a little more work. And you must have the bootcamp software installed on the PC side.

And the CUDA drivers found here. Only if you want to run CUDA over Open CL. I haven’t noticed a difference.

This is a topic nobody really seems to know about or understand. So I’ll just tell you what I know.

The Mercury Playback Engine requires you to have at least 1GB of VRAM in order to work. However, 1.5GB is really what you need to handle a project with any sort of scale.  And I have felt the difference.

Some say you’ll run out of GPU bandwidth in these lower end cards before you even use all 4GB of memory. I think this is coming from 15-year-old gamers that think they understand this in terms of gaming. It sort of makes sense in the gamer world, your gpu won’t be able to push 4gb of 4k textures fast enough.

With video, the more vRAM you have, the better you’ll be able to work with high-resolution video. You’ll need 4GB to work with 4k Video and from what I understand, for 1080p 2GB will be fine.

I bought the 4GB of memory because the new Sony A7s, and that Panasonic GH4 now shoot 4k. And I know I’ll be working with that footage sooner than later.

Changes Adobe Made to CC as of October 2013

More Info About Graphics Cards. This video is about 2 years old but the cards are still relevant.

And please feel free to contribute to this guide in the comments below.