Nikon has officially announced the 14-24mm f2.8 which is now available for pre-order. Here is a quick overview of some of the new features and a list of some stats that compare it to the competition.

There are some nice features and capabilities packed into this lens which were not possible with the older F mount designs. While many photographers are looking for flashy gimmicks to come out of mirrorless lens designs, sometimes simply making a lens smaller, and lighter is all you need. The Nikon 14-24mm f2.8 does this with grace while still improving on usability and performance.

This lens truly brings us into a new generation of optical capabilities with some very exciting features.

Rear Gel Filters – Gives you the ability to use trimmable filter sheets like gel filters. Although I’m not sure the quality of these filters compared to glass. At least they wouldn’t cause any vignetting which is a common issue on ultra-wide lenses using the front screw on ND filters.

Front 112mm Screw-on Filter – Nikon has built a second lens hood that allows you to use 112mm front screw-on filters. This is useful for variable NDs or polarizers. While many think you shouldn’t use polarizers on such a wide lens because of what it does to the sky, shooting with polarizers indoors or under forest canopy can still produce useful results.

What we don’t have yet is the ability to use square filters on the front of the lens. This is what I like to use since they don’t cause extra vignetting and are easy to swap out as the light fade at sunset. – We will likely need some sort of third-party design.

Not only is that shorter than the older F mount 14-24mm which was 3.86 x 5.18″ / 98 x 131.5 mm, but considering you also have a reduction in the flange distance, you end up with an overall much shorter and compact system thanks to that Z mount.

The MTF Charts Are Very Impressive

Look at that 14mm performance, I’ve never seen anything like that before on an ultra-wide. On the tell end, it looks like the edges lose a little of their splendor. 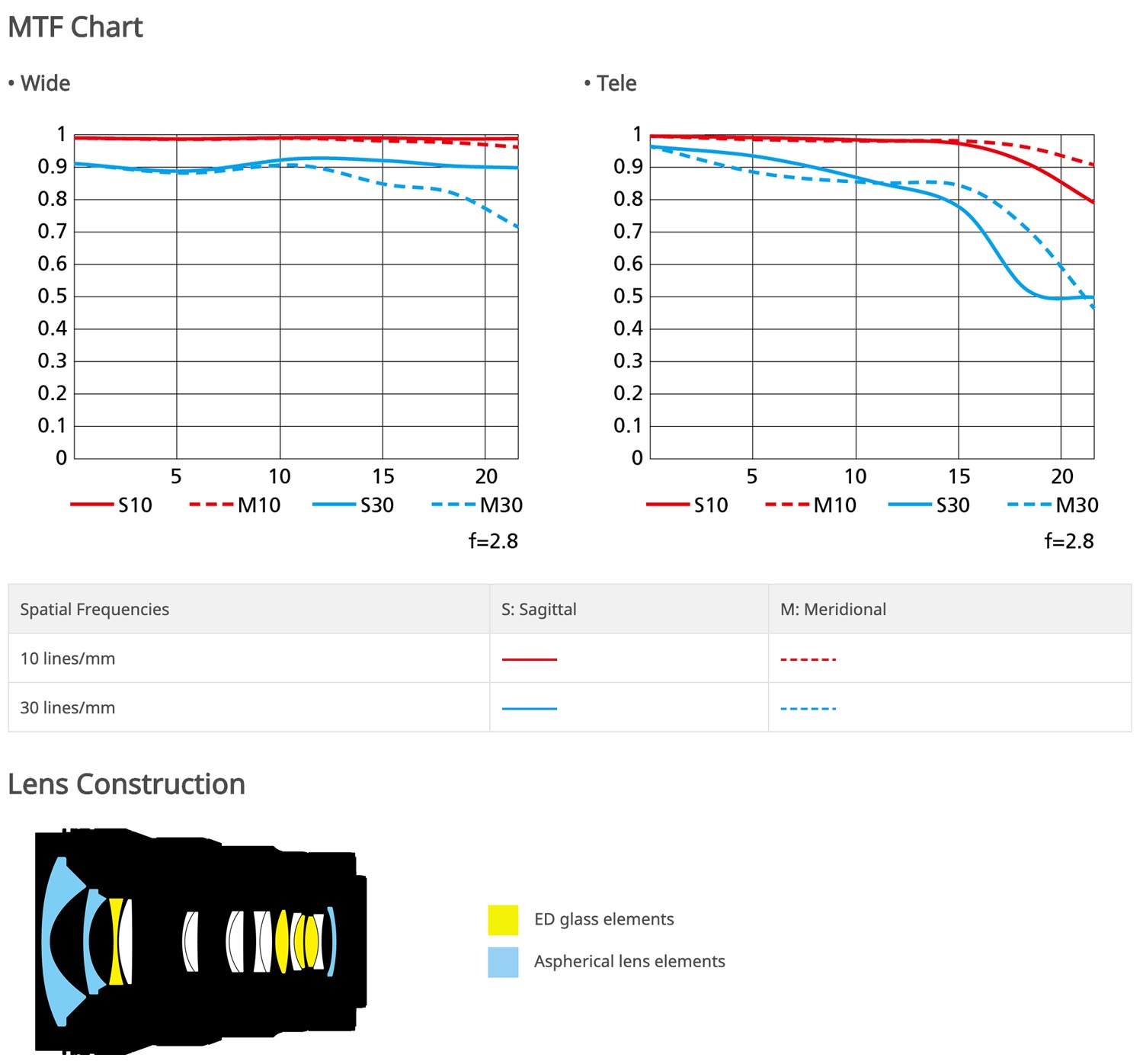 With Canon, Sony and Nikon they all offer something totally different and if you’re considering switching into mirrorless, it’s always important to consider the lens options.

All three of these lenses are pretty cool compared to what we had in the old DSLR days.

The Nikon takes the cake here on being the smallest and lightest of the three. This is a huge win for landscape shooters that have to hike around with a lot of gear. Every little bit of weight savings is a nice bonus.

Can’t really say there is a clear winner here, they are all good at different things. The Canon and the Nikon lenses make the most sense to me, but Sony also has a nice 16-35mm f2.8 GM which I would personally buy over the 12-24mm, because of the price. But the Nikon 14-24mm is still smaller and lighter than the Sony 16-35mm f2.8.

Nikon 14-24mm f2.8 S – Nikon stuck with its traditional 14-24mm f2.8 range. This was one of the big sellers of the Nikon cameras back in the DSLR days. I almost switched from Canon to Nikon just for that lens and most serious landscape photographers actually did switch. This was of course back in the days before landscape photographers only cared about Eye AF and tracking when shopping for cameras. 🙂

The Nikon 14-24mm also looks to perform best at the wide end which is smart. You’re buying a 14-24mm for that 14mm, it better perform. The design range wasn’t broke so Nikon didn’t fix it, they just made it smaller and lighter and improved performance. Fantastic.

Looking at the MTF charts we can see some impressive performance at 14mm. Edges drop off a bit when on the 24mm end.

Canon 15-35mm f2.8 IS L – Canon gave the RF system a nice ultra-wide multi-purpose lens that could also work very comfortably as a walk around lens with that longer 35mm focal length and image stabilization. The 15mm instead of 14mm is a compromise I think most people would be happy with. Having 14mm is better, but then having a 35mm on the tele end is also very nice. At the same time, if you have a 24-70mm then you have a lot of overlap that probably isn’t needed for a landscape photographer that carries around both lenses. Especially considering the extra weight it brings.

When I shot Canon I mostly carried my 16-35mm and 70-200mm and that usually had me covered and I also carried a 14mm prime because I really like the 14mm look.

Canon’s MTF charts are a bit of a mess. Obviously nowhere near what Nikon or Canon is doing. However, their lens does have IS.

Sony 12-24mm f2.8 GM – Sony did what Sony usually does, designed a product for their marketing team with a bunch of fancy specs in order to “win” with no clear focus on anything practical. It’s a 12-24mm, 2mm wider than the Nikon. Is 12mm that useful? I dunno, for me even 14mm is tough to use which is why I like the idea of the Canon 15-35mm and always stuck with the Canon and Sony 16-35mm lenses.

The Canon 11-24mm EF lens had this same issue, which I thought was pointless. Was anyone asking for wider than 14mm and is it even useful? I’m legitimately asking.

You can barely get away with using a 14mm on a tripod without your tripod legs being the shot. Anyone that shoots landscape photography on a 14mm knows exactly what I’m talking about. Maybe people shooting 11mm and 12mm are pano cropping everything? So from my experience, when using a tripod, 14mm is at the limit of what is practical and useful unless you aim up. Any wider and I feel like you’re getting into niche specialty territory which is why I never really get excited for anything wider than 14mm.

What I don’t like about this Sony lens and why I don’t own it is it’s big, it’s heavy, it’s crazy expensive and its most consistent performance is on the tele end. So if you need an ultra-wide, it’s great until about mid-frame, but the 24mm end is a little more consistent all the way out until the edges.

The good part about Sony is they have a nice 16-35mm f2.8 GM which is probably a more practical choice but not listed here because we’re only looking at the widest mirrorless zooms these brands have to offer. I would also probably skip the Sony 16-35mm f4 in favor of the f2.8. I have the f4 and it’s just ok. I’ve been wanting the f2.8 for a while but now this Nikon just came out so I might just grab this 14-24mm instead.

Sony’s MTF charts are pretty good. At the wide end, performance is great until mid-frame. The tele end is a bit more consistent all the way out to the corners but doesn’t quite hug that top line as the 12mm does until mid-frame. Don’t get me wrong, these MTF charts are very good. But for this price, and the weight difference, I’ll take 14mm Nikon over 12mm any day.

The new Nikon 14-24mm is a very impressive lens. If you’re still in Nikon DSLR land this could give you all the reasons you need to switch over. Compared to the other brands it looks like Canon can’t really compete yet in the ultra-wide market. However, the 15-35mm is an IS lens so the target audience is a bit different and it’s designed as a more for usability / general use.

The Sony 12-24mm is the only lens on the market that’s currently a contender, but the Nikon looks to outperform it on the wide end, based on the MTF charts. Of course, stop any of these lenses down to f8 and they’ll all give you great results.

I will say, if you care about having a compact system and are a landscape photographer, Nikon has the competition beat with not only this lens, but also their 14-30mm f4. But if you’re talking about just performance, the Sony 12 – 24mm is very nice if you don’t mind the extra cost, size and weight.

I still like the idea of the range you get out of the Canon and the IS, rumors have it they got something special coming.