Nikon has officially announced the 50mm f1.2. Here is an overview and a general comparison to what some of the competition has.

Add to the list of all Nikon Z lenses. 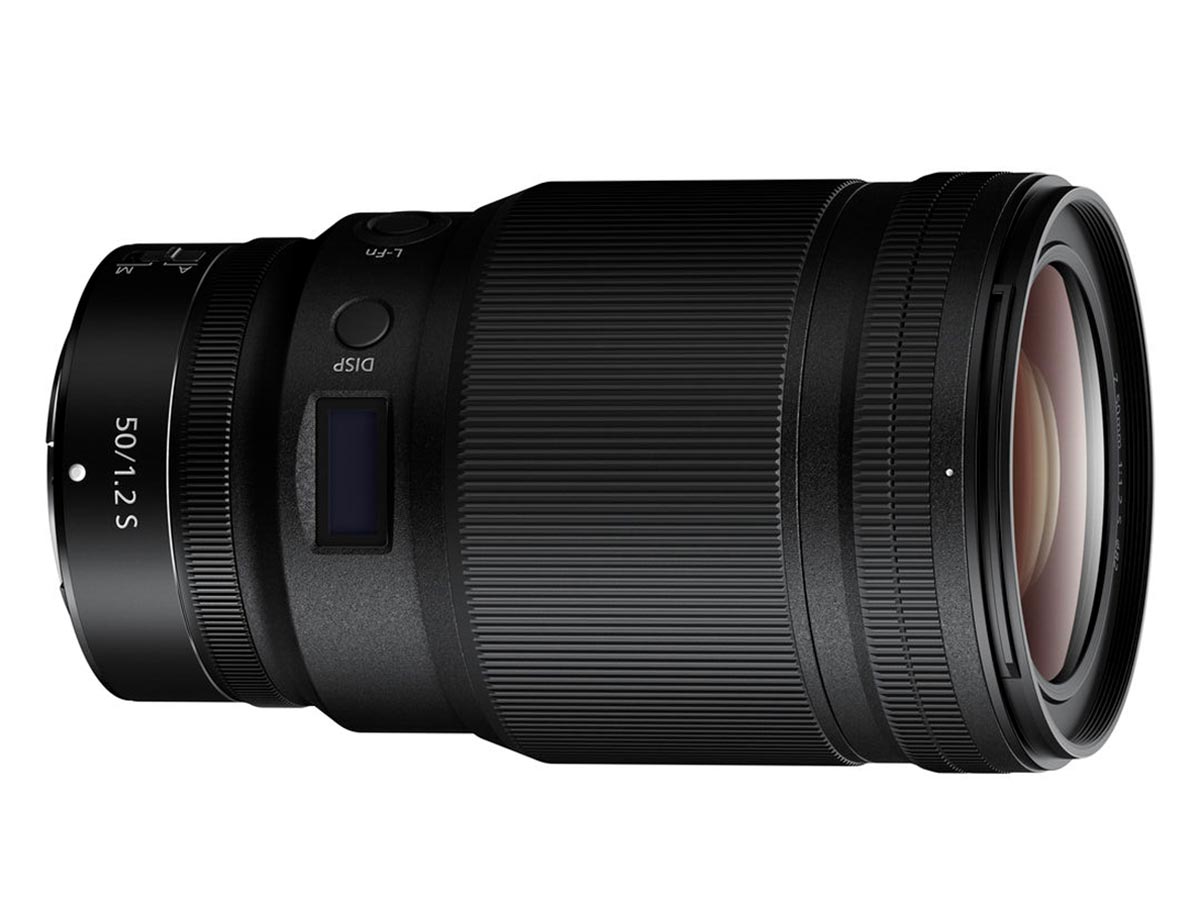 See the official Nikon page to see all the specs and technology in the lens.

And this is their announcement page.

Here are the highlights.

The NIKKOR Z 50mm f1.2 has a few unique aspects to it that separate it from the competition.

OLED information panel so you can quickly glance to check settings and an L.Fn button which allows you to make exposure adjustments on the lens. While these features don’t seem that useful at first, once you incorporate them into your process and build your muscle memory around them, they can be very useful. Since it’s a large lens you’ll likely always be bracing it with your left hand, so having those controls right there and always available could be convenient.

IF Focusing allows the lens to focus internally so there is no change to the physical dimensions of the lens.

Multi-FS This is technology Nikon has pushed in a few of their lenses. Essentially it’s two focus elements driven by two different focus motors. This allows for faster, and more precise autofocus, but it also improves aberrations. This improves close focusing. 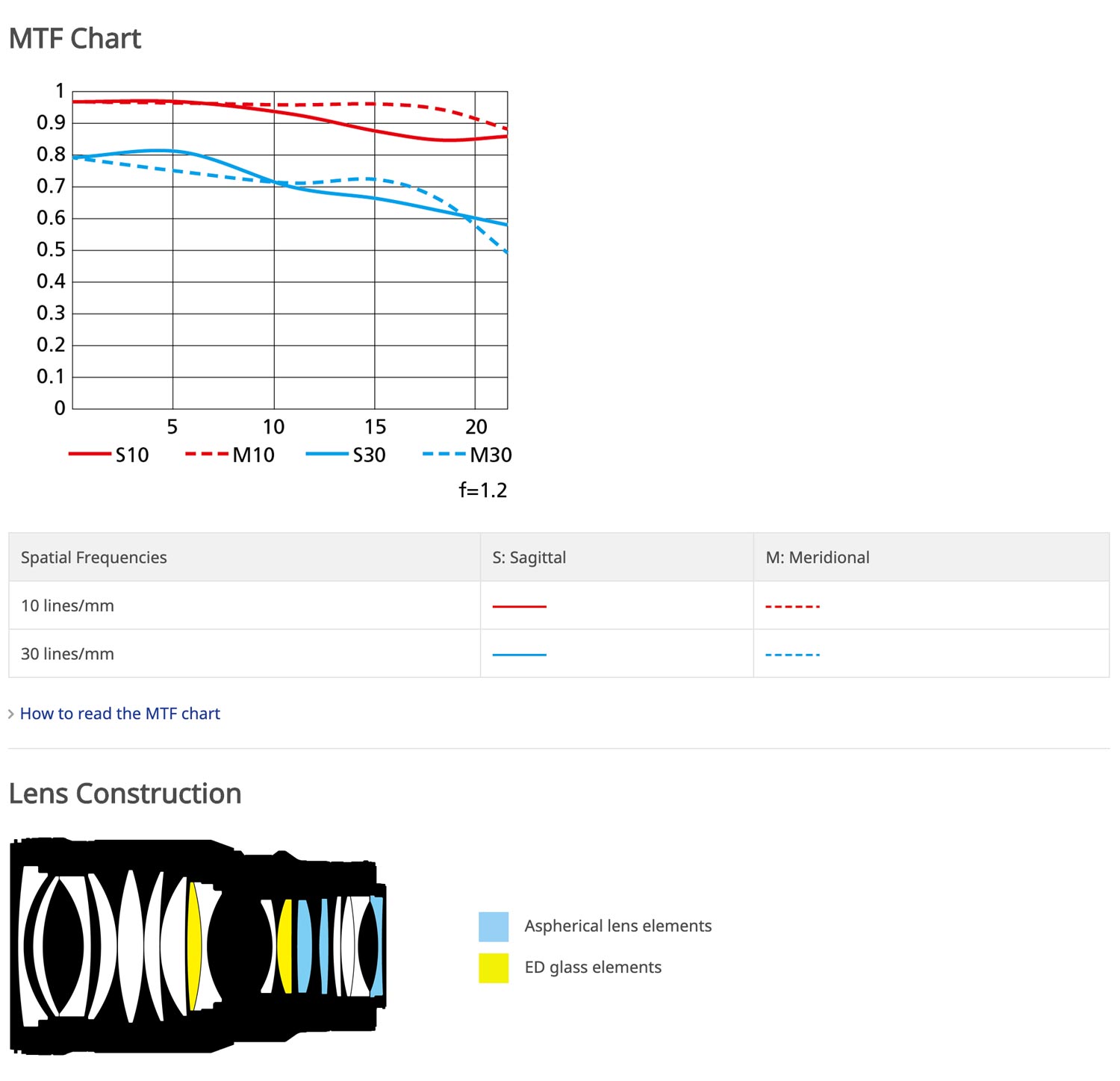 These MTF charts are really good for an f1.2 lens.

The center frame sharpness should be comparable to the Z 50mm f1.8 S, which is a very good lens in terms of sharpness. I’ll still stand by what I say about the NIKKOR Z 50mm f1.8 S being the best 50mm ever made (in terms of overall performance and features). I highly recommend it.

Compared to the Canon RF 50mm f1.2, It performs similarly in the center, slightly better actually, but it should noticably outperform the Canon along the edges. 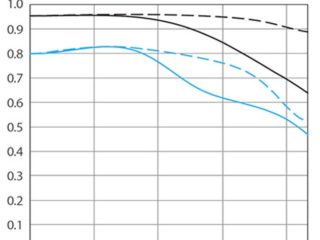 Compared to the Sony 50mm f1.4 – Midframe sharpness will be better on the Nikon but Sony will outperform along the edges. This is comparing an f1.2 to an f1.4 lens. Keep that in mind. The Sony MTF chart shows you spacial frequencies of only 10mm, 20mm, and 40mm, not 30mm so you can only do a 1 to 1 comparison on 10mm – the red line. 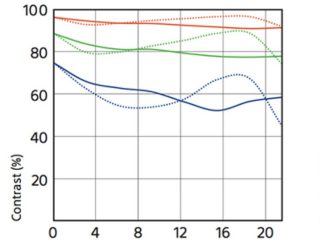 Here is a quick chart showing how this lens compares to the competition with some of the features. I know I should start including Panasonic on this lists as their cameras and lenses are incredible. But for now, we’ll just do the big players.

Looking at the breakdown, you can see the NIKKOR is priced very aggressively. Although it has quite a bit more glass than the Canon or Sony. That probably means it’s more expensive to make.

The Sony is a Zeiss design and you know Zeiss, they like to keep their element count down in favor of that signature Zeiss Pop. This usually comes at a performance hit, unless you’re dealing with some of their bigger lenses like the Distagons.

Expect the Nikon 50mm f1.2 to have the least amount of micro-contrast of the three unless they have some glass or coating advantage, which I don’t think they do. Although it’s probably very difficult to distinguish between 17 and 15 elements.

I talk about micro-contrast a lot on this blog, and it often makes some readers buttholes pucker up, and I get it, it’s not always an important characteristic. I personally have high micro-contrast lenses that I use when I want that extra tonal depth for when I’m trying to capture the moment and life the way it is. In these situations I want that extra pop and that grit, then I don’t mind using my lower micro-contrast lenses for more of the art stuff where it’s more about composition and lighting.

It’s just important to pay attention to these things so you can balance out your kit and get the best performance for your style.

The Nikon also uses a 9 bladed aperture vs the Canon at 10 and the Sony at 11. The Sony should technically give you a smoother bokeh shape when stopped down, especially since it’s stoping down from f1.4.

The NIKKOR is also the heaviest of the three, but only slightly heavier than the Canon. This is probably fine too considering the vast majority of Nikon shooters are Grizzled men, not skinny jean wearing hipster kids, so the weight here won’t be of any issue for the Nikon photographer.

My Thoughts On Fast Lenses | Who They Are For

I have some opinions about ultra-fast lenses like this that aren’t really in-line with the rest of the community, so I will share what I think.

First off, these lenses are tools designed for low light or a certain look. Fast lenses, although more expensive don’t automatically mean you’re getting a better image or even a better lens. It’s up to the lens designers to decide how good they want to make a certain lens at a certain aperture. Traditionally with DLSR lenses, f1.8 lenses were built cheaper and considered entry-level primes. Today, lens designers are throwing the kitchen sink at even f1.8 lenses so you can find incredible performance and builds like with the NIKKOR Z f1.8 lenses and some of the Sony f1.8 lenses.

Now that our systems are aimed at hybrid shooters, having higher quality slower lenses is a must for videographers that can’t shoot everything wide open all the time. They need lighter, slower lenses so they don’t have to have a 4-inch stack of ND filters over the front glass.

In terms of image quality and capabilities, while having f1.2 is useful, overusing shallow depth of field, in my opinion, can make the image worst, not better, and is one of the telltale signs of an amateur – especially with filmmaking.

My favorite reference for how to do it right is Ex Machina. This film was shot using a super 35mm Sony camera ( similar to APS-C ), at f2.8 – f4 for the entire film. In full-frame comparisons, this would be closer to f4 to f5.6. Of course, it’s not exactly the same because of the anamorphic lenses. Generally having a beautiful background and production design is important to a film and the storytelling and professional cinematographers are careful to preserve this in their shots. Controlling the depth of field and the look of the background is an important part of the craft.

Professionals should be careful about buying ultra-fast lenses and using them wide open for everything. Almost always you get more tonal depth with a slower lens with fewer elements and the bokeh often looks significantly worst when stopping down these ultra-fast lenses compared to slower lenses. Sure, a 50mm f1.2 is often sharper at f1.8 then a 50mm f1.8 but usually at the cost of some pop and bokeh smoothness. Sometimes even contrast.

Unless you need that extra stop in low light performance or often shoot in situations where you need to calm the background with shallow depth of field, you’ll almost be better off with a slower lens, like an f1.8, which in my opinion is the sweet spot in terms of versatility for a 50mm.

That being said, f1.2 is incredibly useful for the wedding photographer that has little control of the scene, the large aperture gives them a tool that can solve more problems. The shallow depth will allow you to hide busy backgrounds, plus it will expand the low light capabilities when shooting in poorly lit cathedrals, or receptions.

I personally don’t always like the ultra-shallow look on headshots, but I think for full body shots, the f1.2 will produce a really nice subject separation and f1.2 on a 50mm is great for this.

It seems Nikon has spent zero money advertising or pushing this lens or the 14-24mm which also looks incredible, which is a shame. I’m hoping they have a big announcement or launch lined up for the next generation of cameras where these new lenses are included.

I really like where Nikon is going here, the reasons I’ve been investing in Nikon as my full-frame system is their product line up is just so focused. Everything feels like it’s part of a giant family. I can’t say the same for Sony, Canon or Fujifilm who release random lenses that all look different and have no relationship to the other products.

Although the family of Fujifilm F2 lenses is very nice. I like them a lot, except the 35mm f2 has that swirling bokeh so it feels a little bit out of place with its artistic aesthetics compared to the other f2 lenses.

You pick up any Z lens and they all feel familiar. I really like that about the Z system.

Here is a little movie Nikon put together. You can tell the micro-contrast is low, but it nails that dreamy portrait look.