You’ve probably seen a lot of comparisons between the Nikon D850 and the Sony A7rII or A7rIII these last few weeks, comparing sensor sharpness, dynamic range or low light performance. But they often make one critical mistake, they don’t use the same lens.

So to compare both cameras, I wanted to use the same lens. To do this, I employed an old and very sharp Helios 44-4 58mm lens that I have adapted to both cameras and shot using the exact same settings.

For this test the Nikon and Sony both were using the Helios 44-4 lens at f5.6 1/6 shutter. For the Nikon I shot in Silent mode so that there was no shutter or mirror slap. A full electronic shutter in the Nikon D850 resulted in the Nikon image being a touch brighter, so I adjusted for that by lowering the exposure -0.30 in Lightroom. For the Sony I shot with electronic first shutter. 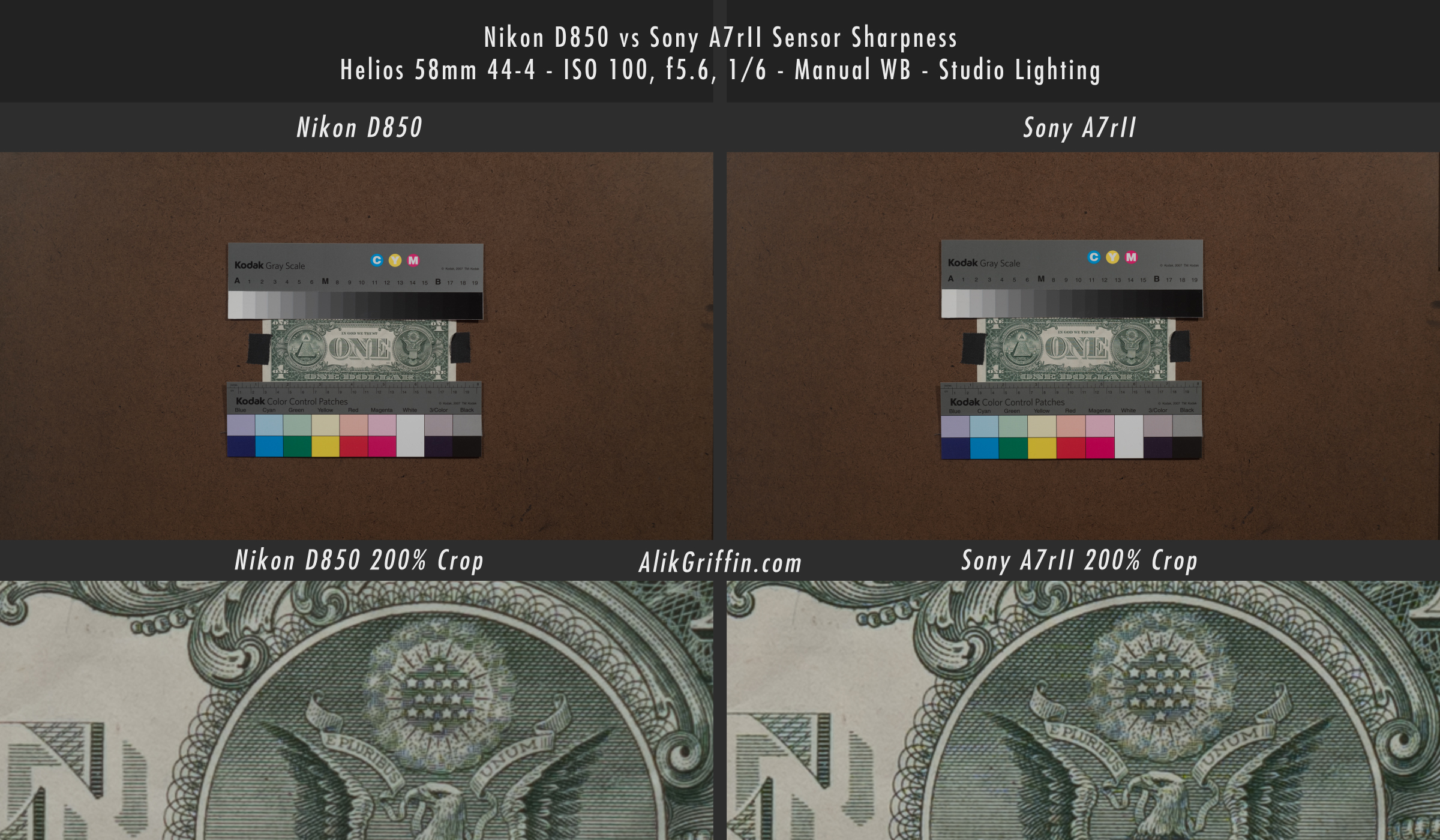 Looking the comparison it appears the results are pretty similar. I’m not really seeing any huge advantage from either camera. The Nikon image here is slightly softer, but that could be the results from a less aggressive sharpening algorithm from the Nikon image processor. Ultimately and most importantly, the Nikon D850 isn’t missing any details found in the Sony sample.

What’s actually really cool about this comparison is my two year old Sony A7rII can still match the sensor quality of a brand new Nikon camera.

Both cameras have incredible high ISO performance. In my samples here the results came out really close to the same. Keep in mind the Nikon was exposing about .3 stops brighter from the electronic shutter.

Surprisingly there are really no crazy color shifts or amp glow until about ISO 25600. 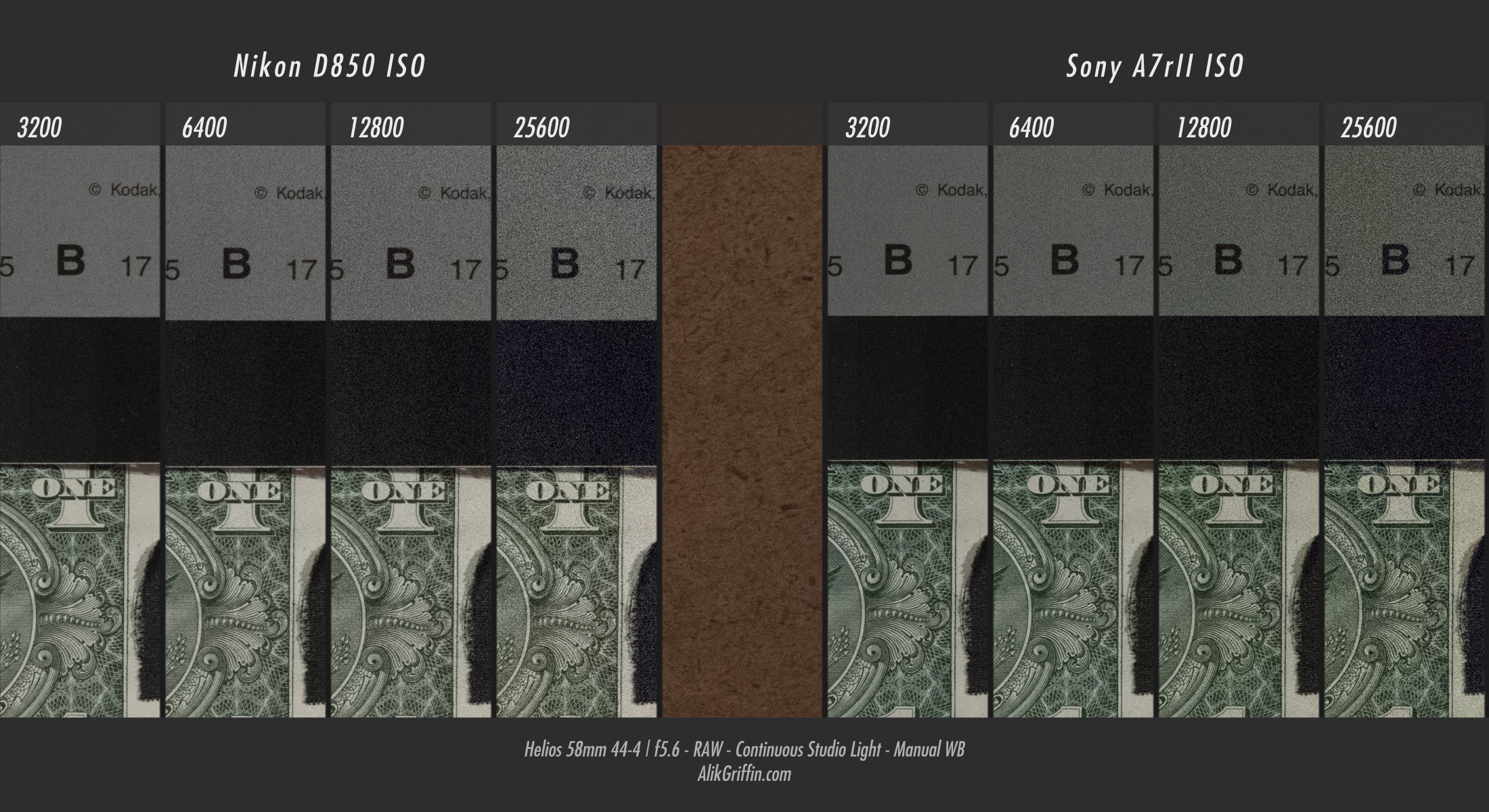 I know the Sony A7rII is not the same as the Sony A7rIII, however, from online tests and reviews, it seems both cameras share pretty similar image quality despite Sony saying their A7rIII has a half of a stop more dynamic range. I’ll have to wait for my A7r III to arrive before coming to any conclusions. Maybe the A7r III is significantly sharper, but that would have to come from the image processing side since both the A7rII and A7rIII cameras have a near identical sensor.

Getting Fair and Accurate Results

Getting fair results between both cameras is tricky and I had to do a lot of tweaking, tuning and testing to get proper performance from this Sony sensor inside the Nikon D850.

If you just take both cameras, shoot them side-by-side without tweaking any settings, you’re going to get softer images with the Nikon D850 because of that mirror and shutter slap. You can feel the camera vibrate in your hands and it is intense. Even on a tripod, the Nikon D850 at these slower shutter speeds of 1/8 was giving me incredibly soft images. Which is unfortunate.

I would hate to see landscape photographers shooting in low light with the Nikon D850 without engaging electronic first shutter or silent shutter only to end up with soft images. So tip for those guys, do some tests, enable electronic shutter first or silent shooting and keep the mirror locked up.

For these tests I ended up enabled silent shooting on the D850. I found the electronic shutter once, but then couldn’t find it again and my two-year old daughter had declared war on me at the time and kept dialing random numbers on my phone and would keep taking off her diaper, so in the heat of the moment and for the sake time and my own sanity, I gave up on Nikons terrible 1990’s UI menu system with its dated font that’s 500% worst than Sony’s, and just enabled silent shooting mode. 🙂

Unfortunately, I only had the camera for only a few more hours when doing this test and wasn’t able to go back for more tweaks. Initially I had the camera to just do memory card speed tests to see which memory cards are the fastest in the D850. BTW I’ll have the results up in a few days.

So using the silent shutter mode allowed me to also get past that mirror slap since it will keep the camera’s mirror locked up. I believe you can do mirror lock up and still shoot with electronic first shutter which would be ideal for landscape and product photographers. Because of this full electronic shutter, the sensor seemed to gather a bit more light – about .3 stops. I believe it could be because it takes slightly longer for the electronic shutter to disengage each pixel compared to how the mechanical shutter works.

I believe this is why you’re seeing the Nikon D850 comparisons come out so soft compared to the Sony cameras, because of mirror and shutter slap and I think a lot of testers are not adjusting the camera properly to get fair results. However, one could say just allowing for shutter slap and mirror slap gives more ‘real world’ results, and this wouldn’t be a lie.

Moral Of The Story

If you’re wondering who makes the sensor in the Nikon D850, it’s been confirmed to be produced in Sony factories but designed by Nikon. Honestly, you could say it’s a Nikon Sensor assembled in a Sony factory. Like an iPhone is assembled in a Foxconn factory. Nobody calls iPhones Foxconn phones.

There is a lot more to a camera than its sensor and there is a lot to compare between the Sony A7r III and the Nikon D850.

Which camera is better? That totally depends and there is no right answer, but here are a couple of key differences between each camera.

If you’re not careful and you don’t know what you’re doing, you simply will not get sharp images with the Nikon D850 in some situations because of the insane mirror and shutter slap.

If you’re shooting into the sun at high f-stops, you’re going to get more red dot sensor flaring on the Sony camera because of the short flange distance.

When it comes to white balance, the Nikon D850 is much more accurate and renders prettier images than any Sony camera I’ve tests or owned. I’ve heard rumors that the Sony A7r III has slightly improved and tuned their colors, but in terms of AWB or even exposure, Sony is a good five years behind Nikon and Canon. I’m not really sure why this is either, it could be having extra sensors on the mirror allows for more advance technology compared to having it on the CMOS sensor. That would make sense because I feel even Fujifilm struggles a little with AWB compared to Canikon.

Both cameras have terrible menus, but Nikons is worst

Of course both Sony and Nikon have terrible menus. Honestly Nikon’s menu is worst. Sony at least uses a post 1980’s font in their cluttered menu and throws in a splash of color.

Nikon is the most unintuitive camera in history

Nikon probably makes the most unintuitive camera out there. You have some lenses that only autofocus on some cameras, you have cryptic autofocus settings that are so complicated people have to make instructional videos on it, and they get a half a million views on youtube like this video from Steve Perry – https://youtu.be/_N_bzhJAKms

You have settings that are impossible to find and buried deep in menus. For example, you can’t do something as simple as change the ISO from auto to manual without going into a menu.

Sony makes the only professional camera where you can’t glance down at your camera and instantly see what your settings are. For example, Nikon and Canon professional cameras have a little screen on the top of the camera that shows you all your most important settings. This allows you to instantly see how your shutter, ISO or aperture are set.  This is so unbelievably important when you’re on the fly shooting in the moment and Sony cameras simply lack this feature.

Fujifilm and Leica do something different but just as effective by having a dial for everything on the top of the camera.

Sony has no great dials and no screen. So if you want to see what your settings are, you have to look at your rear screen, which is completely cluttered with nonsense. If you turn everything on, there is so much crap on the screen that you can’t even see your image anymore.

Sony really should adopt the dial system of Fujifilm.

Right now the Nikon lens echo system still completely dwarfs Sony’s. However, Sony has a ton of great FE lenses now and they’ll be caught up in just a few more years.

When it comes to third party brands, some designers like Tamron still aren’t making lenses for Sony. This is unfortunate because Tamron makes the best zoom lenses money can buy.

No camera is really better than another; they’re all just different

All these different characteristics pointed out above bring me to this one point – no one camera does it all, and no one camera is better than all the others (Well, except the Fujifilm X-T2, 🙂 which is the best camera ever made).

Cameras are all a little different with different personalities designed for different people. I think Canon is the only company right now that severely lags behind in sensor performance. But in my opinion, their cameras are so well designed and so much more intuitive / easier and fun to use than Sony or Nikon, that it makes up for their crappy sensors. I personally love the Canon 6D II even though the sensor sucks and the Canon SL2 is such a fun little camera.

Even though I shoot with Fujifilm and Sony mostly, I would love to have a Nikon D850, or even a Canon 5DIV and often fight the urge to buy one.

At the end of the day, they are just cameras, a means to an end.