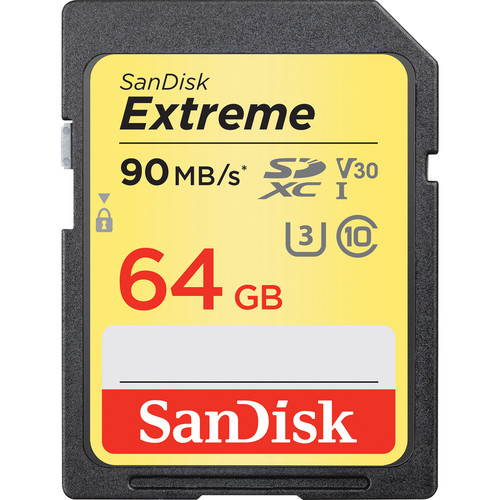 This doesn’t make Extreme a bad card, in fact the Sandisk Extreme cards are still great for many devices. A lot of entry-level cameras aren’t capable of producing very fast write speeds, so this makes the Sandisk Extreme one of the best sd memory cards for the price for those devices. So point and shoots, and a lot of Sony and Panasonic cameras.

The Sandisk Extreme can be found in four sizes – 32GB, 64GB, 128GB and 256GB. They are rated V30 except for the smaller cards. You can still find the card in 16GB but they’re starting to be discontinued.

Real world performance with the Sandisk Extreme is just average. Not great, but not terrible either. Slightly slower read speeds than the Extreme Plus and Pro cards and quite a bit slower write speeds as well. The card is still fine, a lot of cameras can hardly produce faster write speeds than what this card is capable of anyway, especially slower cameras designed more for consumers like a lot of the point and shoots, or even a lot of Sony cameras. Not that Sony cameras are designed just for consumers or anything, it’s just most of their cameras before 2018 had very slow bus speeds.