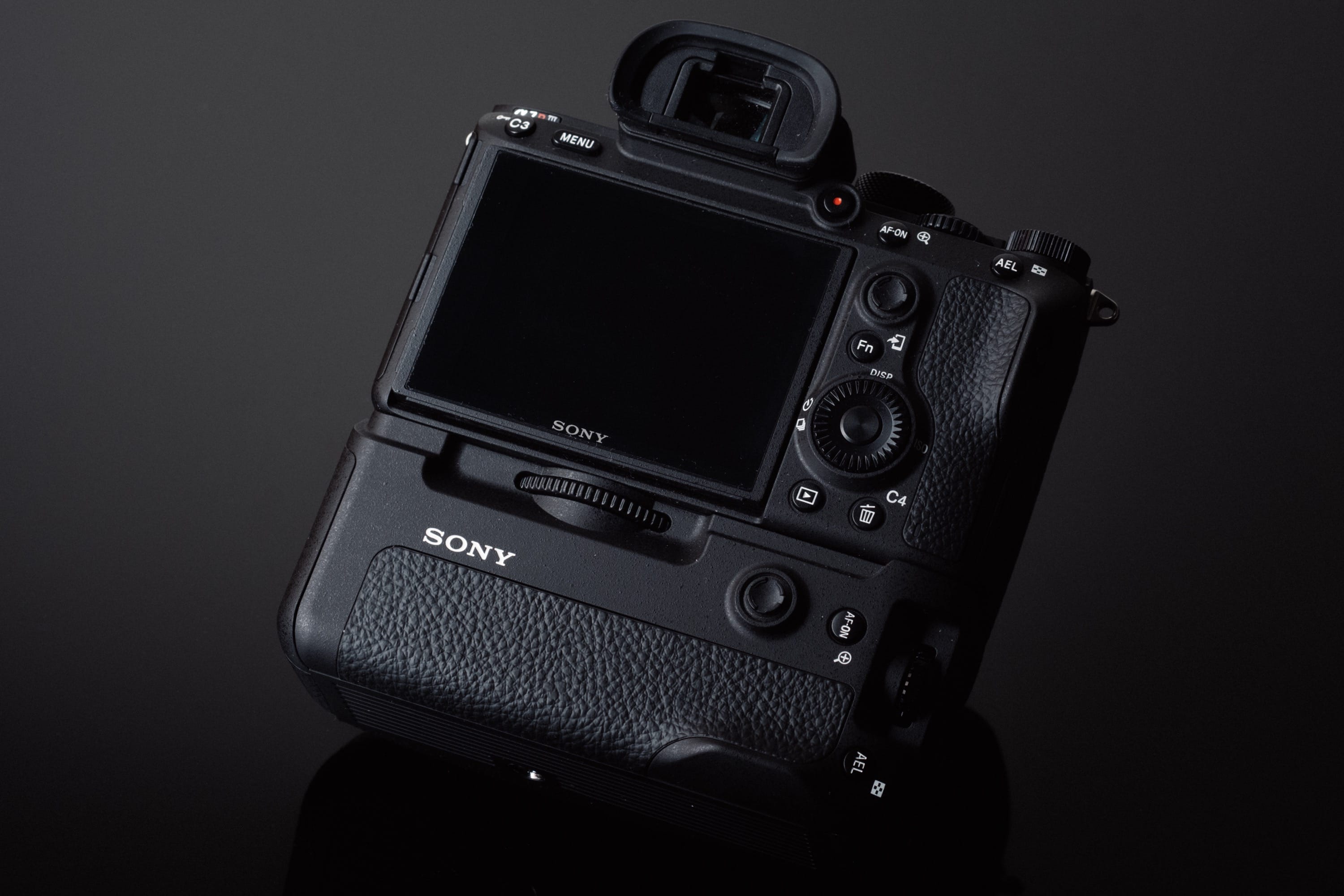 Sony got smart with the new Sony A7r III and gave it a new processor, new buffer, a touch screen and a completely new battery. The same battery as the Sony A9.

Why is this important?

Because the battery has twice the power as the earlier model. I know this is a disappointment to some people as it makes the camera heavier, but the battery life in the Sony A7rII was so inconvenient it almost made the camera unusable – at least in any professional setting, other than maybe product or studio photography where you’re wired in.

The Sony A7r II battery life traumatized me to say the least, so much so that I had to buy the vertical grip for the Sony A7r III. The Sony A7rIII uses the same vertical grip as the Sony A9. It’s not a bad grip but it’s not going to win any awards either. Although I have to say, it is rather beautiful. It looks nicer than the A7r II grip in my opinion.

My biggest complaint is it doesn’t really offer any new features. The Nikon D850 and Fujifilm X-T2 grip give the camera improved performance, a higher frame rate and in the X-T2, a higher frame rate in the EVF. The Fujifilm X-T2 grip also includes a headphone jack and functions as dual battery charger while giving the camera the ability to have three batteries instead of two. It also has a little compartment so you can store the terminal cap that comes off when you connect the grip, and my favorite, the felt lining.

The Sony A7 III vertical battery grip doesn’t really give anything extra other than improved ergonomics and extended battery life. You can’t charge the batteries with the just the grip and it really isn’t built all that great. There is really nothing there to justify the price.

The main shell of the Sony A7r III grip is nice, it’s made of rigid magnesium and is very durable and weather sealed, but the components of the grip feel very cheap. So the tray that slides out and the section that slides into the camera body all feel of very light weight cheap plastic. You can maybe even see in my sample photos how the plastic on these parts doesn’t really hold a firm shape. Of course once the grip is all setup, none of this really matters. This design just reflects the problem with Sony’s ethos, where they simply don’t pay attention to detail.

The vertical grip also has the same terrible spongy buttons and the same plastic chunky feeling dial as the camera itself. Charge the grip isn’t that quick. The user manual recommends to charge the batteries in the grip via the USB-C port on the camera. While this works, the problem is, I’m only able to get about 7.4 watts into the camera and it takes forever to charge both batteries.

On the other hand, the external battery charger that comes with the camera can charge at around 13 watts, or 8.4volts at 1.6amps.

Since the USB-C port on the camera is only capable of this light load of power, I’ve found it best to take one battery out of the grip and charge it with the external battery charger that comes with the camera, and charge the second battery inside the grip via USB. This the fastest way to charge both batteries without spending more money on other chargers, otherwise you’re looking at an overnight charge – which is probably fine considering you won’t burn through both batteries in a day anyway, unless maybe you’re a video shooter.

When I first saw the USB-C port on the Sony A7r III, I was really excited because USB-C could potentially allow quick charge with at least 15 watts. USB-C in devices like the Macbook Pro is capable of delivering 100W of charging power, but in the Sony A7r III I can only get around 7.4W.

I’m ordering some more voltage meters to see if I can get better results when doing USB-C to USB-C.

I also recommend, if you are going to charge your camera via USB, you should do it through and external power bank like a RavPower or something with QuickCharge or iSmart. This will keep you from blowing out your camera from any sort of surge. Plus you can always strap one to your tripod and tether to the camera when shooting video since the Sony A7r III will charge while tethered via USB.

Considering it takes 150 minutes to charge one battery with the official Sony charger, it would take 300 minutes or 5 hours to charge two. With the battery grip getting almost half the watts, expect to see a full charge of the grip in about 9-10 hours.

Battery life with the grip and the two batteries lasts days! I took the camera out for its maiden voyage and shot all around Beverly Hills, shooting 418 photos and I think I only got one battery down to about 70%. That’s fantastic because I would have probably burned though at least one battery in the A7r II.

The camera with the grip is a bit heavier but this is good because it helps balance out heavier lenses and makes the camera more comfortable to hold. I have never had a weight complaint with a camera like this and personally wouldn’t mind if Sony even made the camera a little bigger, which is why I love these battery grips.

I’m also not seeing the perpetual battery drain even when the camera is turned off like many people reported with the Sony A7r II.

While the body of the grip is very ridged and feels good in the hand, the rest of the grip feels cheap, mainly with the buttons and plastic components.

The grip does have really nice ergonomics for shooting portrait and an insane battery life, but charging the grip is a little slow and kind of a pain. The grip also doesn’t add any extra cool features for the camera.

I feel like Sony is sort of pulling a fast one on us here by charging what they charge for this grip. It may be worth looking or waiting for any third-party grips if your on a budget. However, if you’re someone like me that like consistency, the grip does feel “one” with the camera. Same matte finish with the same rubber grip and the same buttons. It also has the little nipple to adjust focus.

Ultimately, I’m very happy with the grip, how it feels in the hand and the extra battery life it provides and it’s probably one of the best accessories for the Sony A7r III. I can live with the spongy buttons and cheap plastic, I’m just a little disappointed by the price. I need the grip and would buy it again, but it’s a bad grip at this price and rather pathetic when you put it up next to Fujifilm’s vertical battery grip. It should be $200-$250 at the most, especially considering the grip doesn’t take AA batteries, so you also have to buy an extra $70 Sony battery. Sony, you’re one sneaky son of a bitch! 🙂 Do you think the Fujifilm X-Pro4 will get IBIS?
3 days ago
Follow