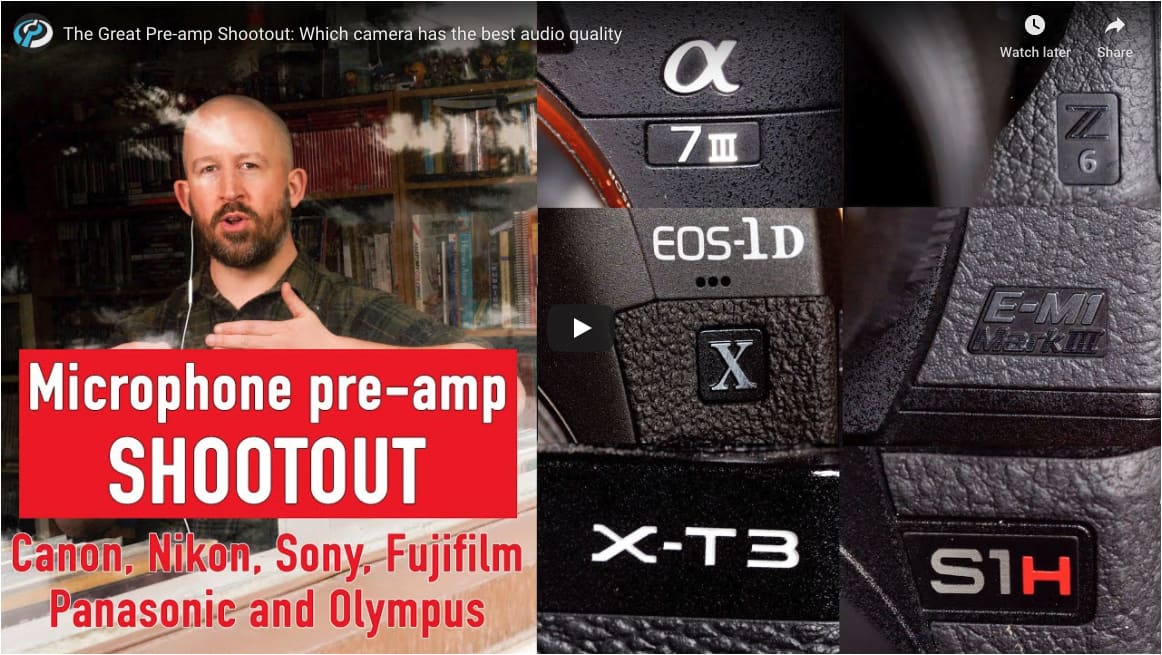 The results showed the Canon 1Dx III, Panasonic S1H and Nikon Z6 at top. The Fujifilm X-T3, and Sony A7III came in last.

A lot of people are sort of pissed right now by these results. Time and time again we were told that the Z6 pre-amps suck by Jordan at DPreview and that the A7III was always the camera of choice. Then DPreview always says the X-T3 pre-amps are pretty good but I’ve actually always found them to have issues.

So what’s going on?

How could DPreview have been so wrong in the past?

How were we so misguided?

There are a few reasons. Maybe some bias, although I don’ think so here, maybe some random variables in copy-to-copy camera bodies, maybe external environmental factors.

And of course, you should never just say Z6 pre-amps are bad unless you provide users with a side-by-side comparison under identical circumstances to a similarly priced camera.

Also, most importantly, there are use case scenarios that will make some cameras look superior to others and that’s actually what’s happening here.

So before everyone goes out and attacks DPreview or says the A7III has the worst pre-amps, read this because it’s looking more and more like DPreivew did nothing wrong rather, they are just seeing different results from different use case scenarios.

Luckily, Alex has been very active in all the comment threads and has shed a ton of light on the situation. Here is the gist of it.

Why Are The Sony A7III Pre-Amps Bad & Nikon So Good?

Obviously the Nikon Z6 is a significantly superior camera to the A7III in pretty much every way imaginable, 🙂 but that’s not what this is about.

I’ve been following all the comment threads on this because I personally want to know what’s going on. I have shot with Sony cameras for years and never found the audio to be that bad even my original A7r was fine.

Alex (the guy who tested the camera) has shared some nice information about why this could be happening and you might not get the same results in the way you use the camera.

There are several ways to get a mic signal into a camera.

You can use a hot signal with a Rode Video Mic Pro with the +20db.

You can send a signal with a receiver with various controls and capabilities.

You can use un-powered mics straight into the camera.

All will give different results and some cameras will handle some of these better than others.

Sony also offers a hot shoe accessory to expand the capabilities audio recording, which was not tested in this video.

When doing the tests that made the A7III sound so bad, Alex fed the cameras with a UHF audio receiver.

Here is the gear he used exactly.

When talking about why the Z6 had bad audio when Jordan tested it previously, Alex suggested that it could be from stressing the circuit with an unpowered mic.

“We fed in a mic level signal from a UHF audio receiver, which itself does not draw power from the 3.5mm TRS. It’s possible that using an un-powered mic like a VideoMic Go could introduce more noise by stressing the circuit, but I didn’t test that. Either way, I always encourage users to extensively test gear before they buy if they can! There are so many use cases out there and it’s hard to test them all.”

When the Panasonic S1H struggles with the hot signal, this was done intentionally.

I found a thread where Alex was specifically trying to test a very common phenomenon where users are overdriving the signal. Here is what he says.

“Regarding overdriving the signal, I actually had a reason for testing this like we did! Many cameras reference unity at -12dBFS, whereas motion picture sound gear usually references at -20dBFS or 0dBU. We set the input of the camera so that a -20dBFS signal registered at -12; a mistake I see a lot of folks make when they’re starting out. Knowing that some cameras could survive this common mistake was something I thought would be good for people to know, even if we didn’t say that in exhaustive detail.”

Alex retested the camera and he found with some gear, the Sony A7III preamps still were bad, with other gear it performed great. That’s usually how it goes with this sort of thing and that’s where my bias frustration comes into play.

When a Sony camera fails at something everyone rushes out to correct it. Nothing wrong with that. That’s the right thing to do.

The problem is, nobody does the same thing for any of the other brands, which to me is bizarre. So now the X-T3 has the worst pre-amps in ideal situations according to DPreviews findings. Why not retest X-T3 pre-amps with different gear and different bodies like you with the Sony A7III. Why does only Sony get treated with the kid gloves?

Probably because it’s the camera that absolutely everyone rated as the best buy, best camera for the money, best full-frame mirrorless camera so now everyone has to defend it or they’ll lose all credibility.

When Jordan said the pre-amps were bad in the Z6, everyone just accepted it and everyone continued recommending the inferior A7III over it. 🙂 Why wasn’t the Z6 retested?

Still, the fact remains that Sony pre-amps are not ideal with some equipment and you will need to figure out what gear is compatible when you decide to build an audio system around it. It would have been nice if they also would have tested the Nikon Z6 a little bit more with different gear or the Fujifilm to see what was going on there.

Basically my take away now from all these tests is that the Fujifilm X-T3 has the worst pre-amps according to DPreview.

So it’s weird, this video was basically an apology video for Sony.

Different mics have different electronic components that are operating at different frequencies and they are likely interfering with the pre-amps. Or maybe there is some sort of ground issue going on that some cameras can handle and some cannot.

It seems like Sony cameras just don’t play nice with some mics.

Now somebody needs to go out and test all the different mics with the Sony A7III to see what is compatible with the camera and what is not.

But I would go as far as saying that it’s likely most cheaper cameras will have audio incompatibilities with some mics and not others. I notice my EOS R pre-amps are pretty bad when using the Rode Video Mic Pro when I’m not running it at+20. And my X-T3 has some issues with some of my Rode mics as well.

This whole thing kind of reminds me of the time when Fstoppers made that video trashing MacBook pros for buggy USB-C connectors. Instead of just trashing the MacBook, they should have learned why it was doing this and educated the community rather than just attacking a certain brand they don’t like. Like, Linus Tech, Pauls Hardware, JayzTwoCents likely would have done this.

And for those that don’t know, the reason is, the USB-C technology (designed by Intel not Apple) operates at around 2.4Ghz. Wifi also operates at this frequency so if you’re using 2.4Ghz Wifi on a MacBook pro, your USB-C dongles and some of your Bluetooth devices will go crazy. You must use 5Ghz wifi if you’re using dongles.

The lesson learned here is that when something is performing significantly worst than the competition, we should try to get to the bottom of why so that the community can learn something from it.

Do you think the Fujifilm X-Pro4 will get IBIS?
yesterday
Follow