The Toshiba Exceria Pro is the flagship UHS-I U3 SD memory card by Toshiba.

Toshiba cards are not that popular in western markets but they are pretty standard in Japanese markets. This card is difficult to find but it’s a very good card although a bit older now, at least the one I still have. I can’t find new ones to test. 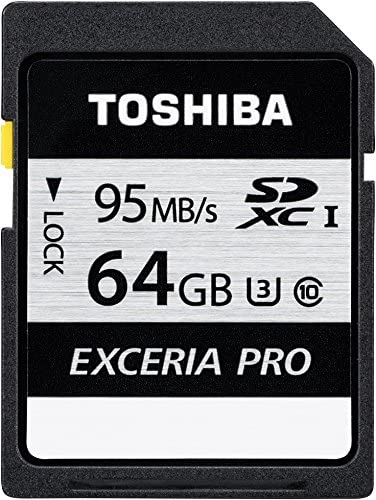 When benchmarking the Toshiba scored a read speed of 97.8 MB/s and a write speed of 74.7MB/s. This is a little bit below average for flagship UHS-I cards based on today’s tests and I would say this card sits somewhere in between a super-fast card, like a Sandisk Extreme Pro, and a mid-range card like the Sandisk Extreme.

The card is only rated for a 75MB/s write speed and 95MB/s read speeds so these scores we are seeing are very close to spec, which is what we like to see.

Will It Work For 4k Video?

The Toshiba is rated at a U3 rating, which means it has a guaranteed minimum write speed of 30MB/s. When you convert that to Mbps we see that the card is able to maintain a guaranteed data stream of 240mbps. Which is fine for a lot of today’s cameras 4k outputs.

Some cameras like Fujifilm are offering 4k at 400Mbps, but usually, they have a lower bitrate option as well, and this goes for mosts camera brands.