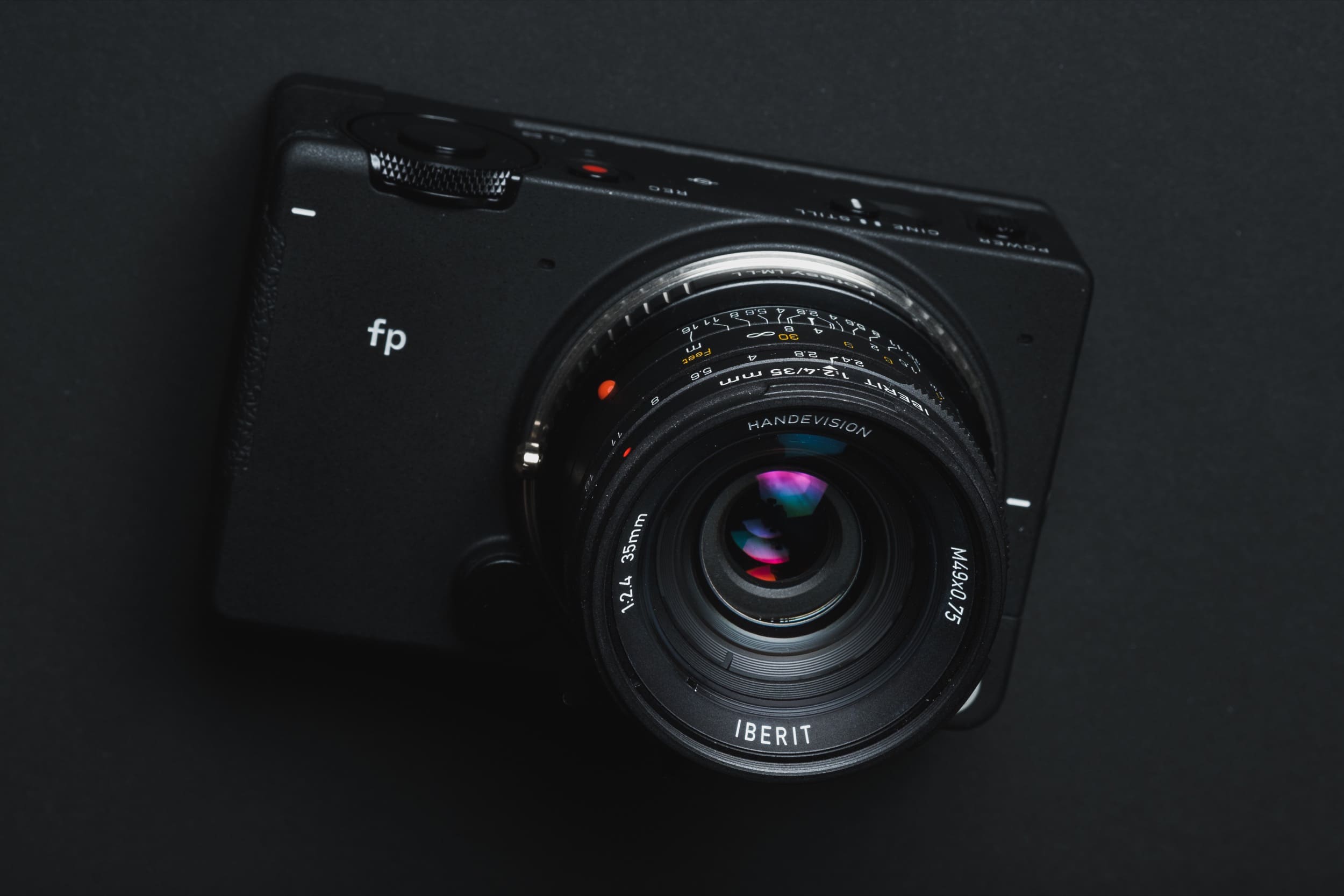 A detailed look at the different brands of memory cards tested in the Sigma fp. Use this guide to find the best and fastest memory cards for H.264 recording or even CinemaDNG.

With the Sigma fp, I got errors, glitches, crashes, freezes when testing the camera out in the field. UHS-II cards were not running at UHS-II speeds when in Photo Mode which makes this guide a little tricky for me. Clearly, the fp was having serious firmware issues with v1.00 and the camera was obviously not ready.

Because of this, it’s going to be important to stick with the popular brands of memory cards for this camera until they figure out their firmware a little better. This camera is the biggest mess I’ve ever experienced.

Right now, I suggest using the best Sony or Sandisk cards since the camera has a massive video bitrate. Sigma even recommends the Sandisk Extreme Pro 300MB/s UHS-II cards, or the Panasonic UHS-II cards but the Sony G cards will also work.

The Sigma will shoot CinemaDNG internally, but you really should be doing that to an external SSD if you don’t want to ever have any buffer problems and you want the best quality video possible.

Honestly, it’s just not worth the trouble of shooting internal CinemaDNG and getting individual frames separated from the audio that you have to put back together in post for only 4k 8-bit. Get an external SSD so you can at least reward yourself with 12-bit. 8-bit is not worth the trouble for RAW, especially since the camera makes an amazing 440Mbps H.264.

If 1080p is your thing, you can do 1080p 12-bit CinemaDNG internally but there are still only a few cards that will handle this that I will list below.

I could not get the camera to run at UHS-II speeds in the Photo Mode so my in-camera speed tests are not going to be helpful. I’m guessing this is a firmware issue.

With the H.264 video bitrate of 440Mbps ( 55MB/s ), or CinemaDNG running at around 200MB/s you will need the best or at least very stable UHS-II cards. If you’re recording at that 440Mbps bitrate you may also want to start with 128GB memory cards since you will fill those quickly.

4k CinemaDNG is at the edge of what SD cards can do and really you should just record to an external SSD, but it does work with Sony Tough and Sandisk Cards.

Here is all that I recommend right now.

Why not ProGrade, Lexar or Delkin or any other brand? Because the camera is super buggy and these cards just usually aren’t as fast or as stable.

I may do some more testing in Feb 2020 if I can get the camera again. By then firmware should be more stable. Sigma is supposed to even offer internal CinemaDNG playback in-camera.

Sigma does allow you to record internal CinemaDNG at 8-bit, 24 or 25fps with the fastest memory cards, but a lot of people are having issues with this. With the massive file sizes, it will likely be easier and cheaper to buy an external SSD. Sigma recommends the Samsung T5. I have the Sandisk Rugged Drive that is an incredible value. I have Velcro brand hook & loops that I have stuck to it so I can mount the drive anywhere.

Here is the chart Sigma provides for us to show you media compatibility for their different formats. 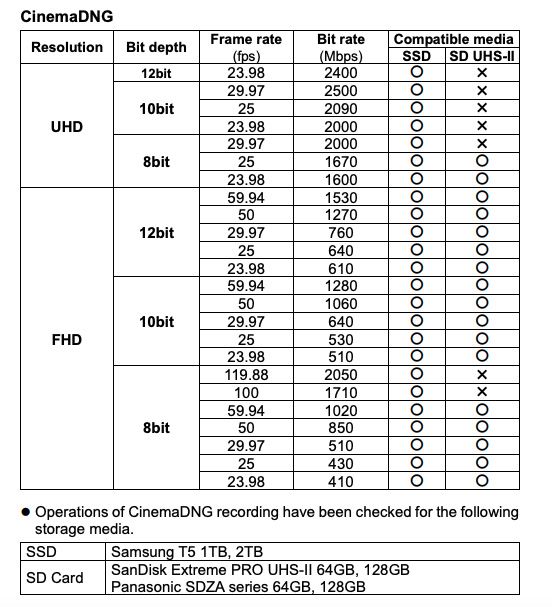 The Sigma fp records Internal mov files at 440Mbps down to 60Mbps. Every UHS-II can theoretically handle this speed, but since the Sigma fp is such a glitchy camera, I would still recommend sticking with the recommended cards above. Or if you want a larger card that’s slightly slower, the Sony M cards are the way to go.

What’s interesting is the 440 bitrate at 120fps. This makes it the highest internal recording bitrate hybrid camera right now. 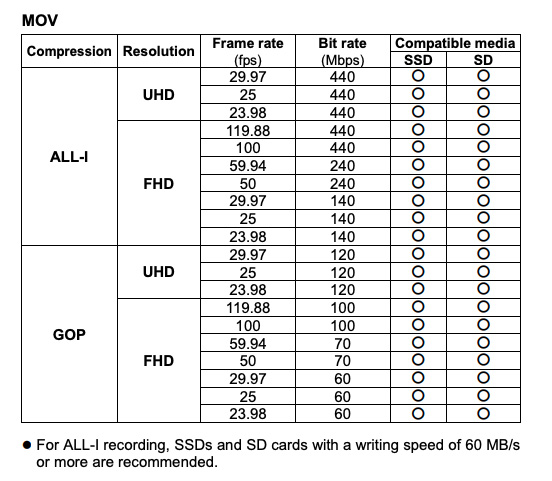 I’m excited to see what this camera becomes. I’ll be keeping a close eye on it since it has seriously piqued my interest and I will do some more tests once the firmware is further along.

If I had this camera, I would probably just stick with 4k H.264 for most recordings and I would only use Sony G Tough cards. But I would definitely get an external SSD and start building a workflow around 12-bit CinemaDNG recording. The Sigma image quality is just beautiful, I love the colors and the tonal depth. This camera was really a good idea.

I wonder if you could get an external CFexpress reader and cards and record to those instead of a Samsung T5? There is so much potential here. More tests coming!