The ProGrade V60 is a mid-range UHS-II SD card by ProGrade.

Who is ProGrade? Micron, a foundry that used to make memory cards under the brand Lexar, one day decided that they were making way too much money off memory for data centers that they couldn’t be bothered with the measly profits from consumer electronic products such as SD memory cards, so they decided to sell Lexar to a Chinese company.

Anyway, the guys that worked for Lexar in the USA were like, “Hey what gives, I liked my job.” So they all banded together after being cut loose and started an awesome memory card company with all their expertise under the brand name ProGrade.

That’s the story anyway. I don’t know how true it all is, but ProGrade is a solid company and they make some pretty decent cards and they usually make my recommendation lists for video.

We still do get some hiccups with compatibility and performance from time to time, as we did with the original Lexar brand. The new Lexar was struggling at first as well, but their cards have gotten better and more reliable, and are making our recommendations again. 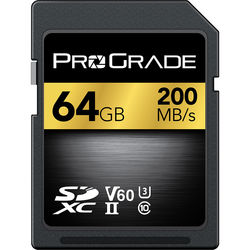 When benchmarking the ProGrade V60 UHS-II card we recorded top reading speeds at 167.6MBs which is a little low for a UHS-II card. It’s possible we need to upgrade our cards to a newer model, or the Prograde V60 card was not fully compatible with our Sandisk UHS-II USB-C memory card reader that we use for all our benchmarks to keep scores consistent over time.

The ProGrade CFexpress memory cards also failed to perform correctly in the Canon R5. So there is likely some type of memory controller or flash that isn’t compatible with some of the hardware that’s out there. We’ll continue to upgrade their cards and retest them on various devices and cameras.

They do often get our recommendation from time to time because they are often priced aggressively. Usually, we recommend them for video recording because they still do meet the v60 minimum write speed rating of 60 MB/s. This means they will work great for any video bitrate recording of 480Mbps or slower. So The Sony A7SIII, FX3 with the H.265 recordings will support this card.

But they do score slightly below average speeds. Prograde does make their own UHS-II memory card readers and we will continue to test their cards and update these lists.

We saw AngelBird cards also have slightly below average speeds, and they’ve switched over to MkII cards now. It’s possible that both ProGrade and AngelBird were still getting certain components from Micron or some other foundry, and a certain production cycle just had a slightly slower performance.

Pure performance shouldn’t always be the deciding factor in what makes a card good or bad since different types of cards do often have other features like error correction (like Delkin and this Prograde card), or thermal throttling (like CFexpress cards), which is something to pay attention to when buying cards for video recording.

Prograde also Laser-Etches their cards which makes it really easy to spot a counterfeit. So there are still a lot of good reasons to go with ProGrade, even if our benchmarks with the Sandisk recording came in slower than average.

We do test every card in almost every camera so you can see how this card performed in your camera with the fastest sd card guide.

They use Custom Laser-EtchedSerial Numbers to stop counterfeit cards.

Comes with a license for Advanced Recovery Pro Software