The V90 UHS-II Memory Card is the flagship SD card by ProGrade.

This card supports a maximum read speed of 300MB/s and a maximum write speed of 250MB/s, although we didn’t see those numbers with the Sandisk UHS-II USB-C card reader we tested.

Note that different card readers can produce different results. We test everything with the Sandisk reader to keep results consistent since not all brands make their own readers. 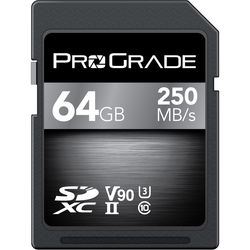 These numbers are slightly slower than some of the other cards out there like the Sony G, Kingston, or Sandisk. However, the UHS-II Prograde cards do have error corrections like Delkin v90 cards and this is a feature you don’t always see with the other flagship cards from the big brands. It’s possible that this is slowing down the speed slightly because we also see similar performance from the Delkin V90 cards.

For Video Shooters the ProGrade v90 has a minimum guaranteed write speed 0f 90MB/s. When dealing with video bitrate, this equals 720Mbps. This means the ProGrade V90 will support any 4k or 8k camera that has a bitrate of 720Mbps or less.