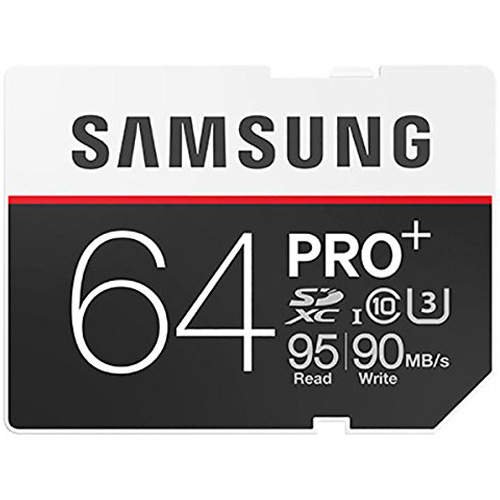 The Samsung Pro+ SD Memory card is Samsung’s best memory card and also a top performer. Compared to the best Kingston and Sandisk cards it’s right up there in performance. The only problem with this card is it does have some compatibility issues with XAVC S or 4k video in Sony cameras. Because of that, it’s not a great card to be used with Sony. In all of my tests I haven’t seen any issues like this with any other camera and card combo.

The Samsung Pro+ can be found in a few sizes – 32GB, and 64GB. I haven’t seen any available in the 128 variant yet like I have with their micro SD cards. They also aren’t available at BHphoto so you’ll have to buy them through Amazon.

In terms of performance, the Samsung Pro+ is often a top performer with in-camera memory card tests, with speed very close to the fastest Delkin, Kingston and Sandisk cards.

In-camera they work great on all cameras except Sony. Sony cameras can’t seem to recognize that these cards are a U3 speed class card and the camera will deny them when trying to record 4k video.

Do you think the Fujifilm X-Pro4 will get IBIS?
7 hours ago
Follow