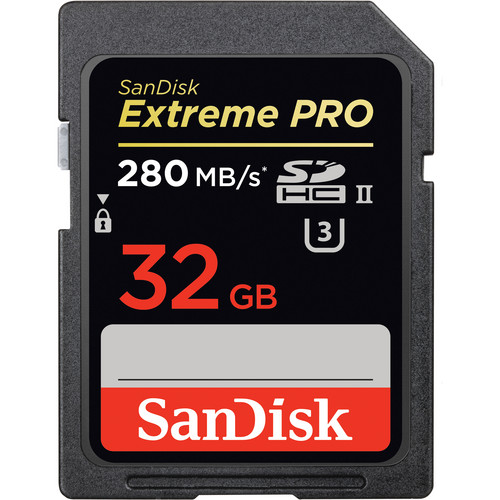 The Sandisk Extreme Pro UHS-II 280MB/s was Sandisks first UHS-II card. Like the Lexar 1000x, it’s age shows. It does however still performs faster than the Lexar 1000x in most devices. While this card is still a pretty good UHS-II memory card, it performs rather poorly in UHS-I devices. This card has also been discontinued so if you do find a copy make sure you’re only using in UHS-II cameras other wise you’re wasting money.

The Sandisk Extreme Pro UHS-II card can still be found in two sizes – 32GB and 64GB.

This card works very well in UHS-II cameras and is very quick. However, I’ve found it has very poor performance when used in UHS-I cameras or devices. For that reason I don’t recommend this card, there are better options from other brands like Sony, Delkin, Adata and Transcend.

To get maximum speed when transferring from this card to your computer, you should always use a UHS-II memory card reader, or else you’ll be somewhat wasting the best features of UHS-II memory cards – crazy fast read speeds.