A full-frame sensor is roughly the size of 35mm film, and an APS-C sensor is slightly smaller. (see the diagram)

It’s ultimately this size difference that is responsible for any change in visible quality between the two sensors. It’s also important to note that megapixels do not matter when comparing sensor size, since the difference is entirely how it works with the optics. 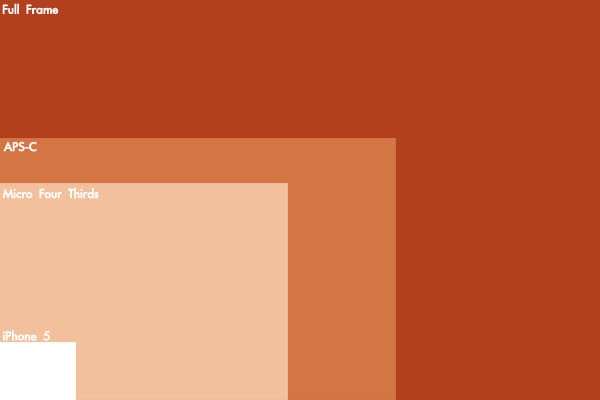 Because a full-frame sensor is larger it covers more surface area and takes in more light. So naturally, a full-frame sensor will perform better in a lower light situation. On the Canon cameras, the difference is about one-stop and with the new 5Dmkiii, it’s even a little more. This isn’t anything major, but for someone shooting weddings or sporting events you might want that additional stop of light. This would allow you to close down your aperture a bit more or increase your shutter speed slightly.

The other major advantage of a full-frame sensor is how it works with the optics. Because the full-frame sensor covers more surface area and is hit by more light, it allows for a shallower depth of field. (How blurry background gets from your point of focus.) It’s hot a huge difference but is noticeable. It works this way because of math. Yeah, I’ll leave it at that.

The opposite is also true. Because the lens covers more surface area of light through the lens, it tends to accentuate lenses of less quality a bit more. So you’ll notice the poor resolution of a cheap lens slightly more on a full-frame camera. The same is true as our megapixel count goes up.

One of the nice features of an APS-C sensor is how it works with lenses designed for full-frame cameras. An APS-C lens has typically a 1.3-1.5x crop. The 7D is a 1.4x crop. Meaning, the lens might project light to cover the surface area of a full-frame sensor, but because the APS-C sensor is smaller, you get an optical crop. This causes the APS-C lens to perform slightly more telephoto than full-frame because of the 1.4x crop. A 50mm will look more like 70mm, 10mm will look more like 15mm, 200mm will look like 280mm, and so on. So if you’re looking to shoot landscapes, you’ll need to go even wider on an APS-C camera. Like a 10mm for great landscapes.

Another advantage to this crop is that you’re capturing the light mostly from the center of the lenses designed for FF cameras. So cheaper lenses that don’t have a good corner and edge resolution get cropped out on an APS-C sensor. This of course becomes irrelevant if you’re using lenses designed for the cropped sensors like Canon’s EF-S lenses.

APS-C cameras are usually smaller, significantly less expensive, and in some cases, they shoot faster frames per second.

Which Camera System Is Best For You?

That’s up to you to decide. If you’re shooting portraits, weddings, or sports where you need as much light as possible and want to get that super shallow depth of field, then you might want a full-frame camera. But if you want to get a bit more reach out of your lenses, say with sports or nature photography, or even if you’re shooting a lot of landscapes and travel photography where the depth of field is irrelevant then I’d consider an APS-C camera. I personally prefer full-frame since they usually have more megapixels so I can print as large as possible. But I still would love to have a compact mirrorless APS-C camera for travel and fun.