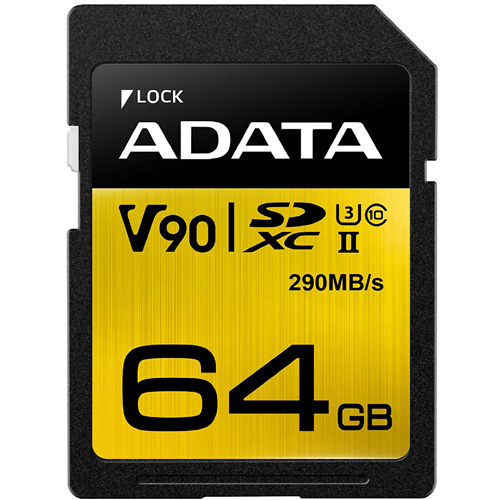 ADATA is a flash manufacturer out of Taiwan and is new to the UHS-II memory card game. They’ve yet to really gain in popularity but their cards perform at the top of the charts for UHS-II speeds and easily match the performance of Sandisk, Lexar and Sony UHS-II cards. If Adata can prove reliability they could be a great alternative to Sandisk once Lexar is no longer around.

The Adata cards are the only top performing UHS-II cards to also be available in 256GB sizes. This means that the ADATA UHS-II card is one of the, if not thee fastest 256GB UHS-II memory cards you can buy.

Real world performance is very good with the ADATA, it’s just as fast as the top Sandisk, Sony, Delkin and Lexar cards. I’ve yet to test it in enough cameras to know how it stacks up within different brands but so far it looks promising.

To get the best speeds out of the ADATA V90 UHS-II memory card when transferring to your computer you will need a fast UHS-II memory card reader. I’ve compiled a list and comparison between all the most popular UHS-II readers and usually the Lexar SR2 comes out on top.