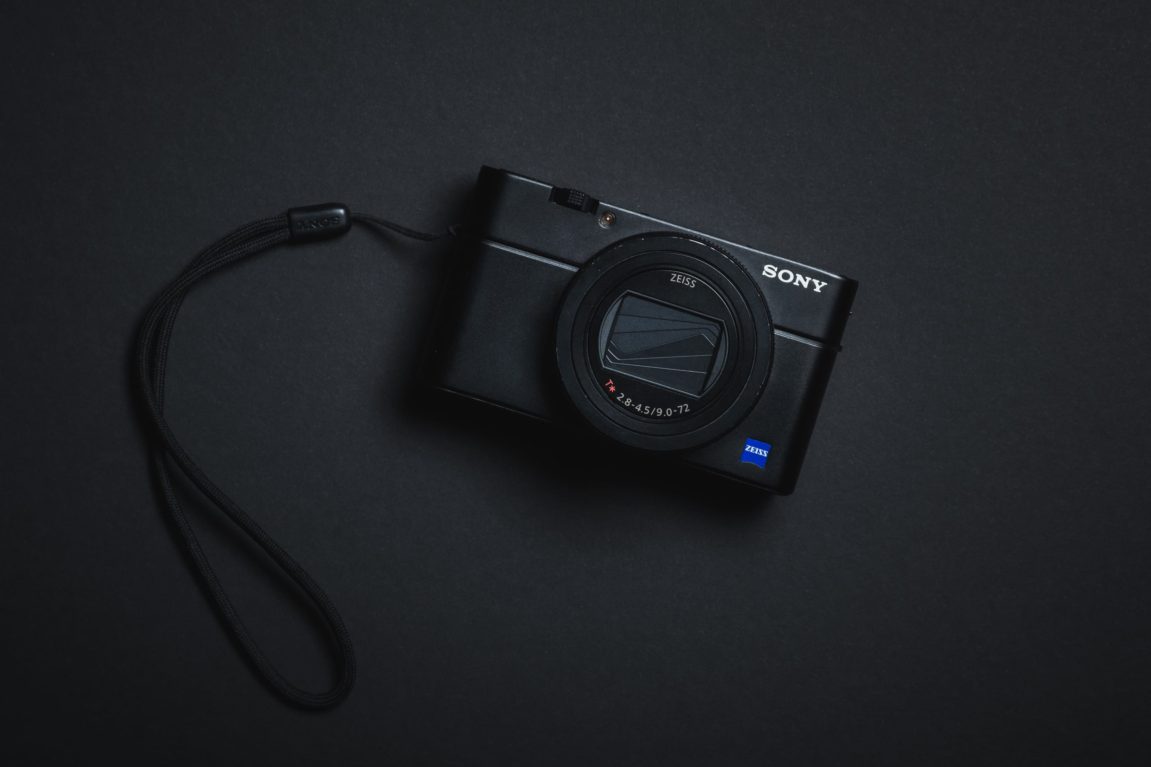 The Sony RX100 VI is a slightly tuned but very similar camera to the RX100 V. Very little changed other than the lens, but the memory card market has evolved significantly since the release of the last RX100 V.

Like with the earlier models, the RX100 VI does not have the tech to take advantage of UHS-II memory card speeds and buying UHS-II gives you no advantage with in-camera sd card write speeds.

We tested all UHS-II and UHS-I cards but recommend UHS-I cards. We’ve also mostly stopped testing U1 cards as they usually are not compatible with 4k video in Sony cameras, so U1 tech is pretty much obsolete at this point. However, if you’re just shooting stills or FHD, then U1 cards can still work as long as you know what you’re doing with your settings and shooting formats.

This chart lists how each card performs in-camera. There are a few different ways to test memory cards in the cameras and on this site I’ve chosen to stick with the real world tests that measure up until the buffer is full. This provides more real world shooting speeds.

The other way to test is to measure speeds after the buffer is filled. This give more accurate card speeds but does little to show any bottlenecks cameras suffer from, due to having limited processing capabilities. Or, with some cameras, some settings can significantly slow down memory card write speeds as it overloads the processor during the shooting and writing processes.

The Sony RX100 VI has a real world shooting bottleneck of about 38MB/s. That’s about as fast as you’ll get out of the camera with default settings when shooting under the buffer.

While most cards work very well in the Sony RX100 VI, we always like to give our recommendations after testing memory cards in various cameras for over five years. Each brand of camera has its own quirks and some memory card brands work better than others.

For the RX100 VI, we recommend UHS-I memory cards based on price and performance. UHS-II cards offer no advantage in speed and cost significantly more money even though some of them run about 1 or 2 MB/s faster than some of the UHS-I cards.

*One brand we’ve stopped testing are Samsung cards. They no longer are really in the SD memory card market and they mostly focus on SSD and micro SD cards. Samsung SD cards always gave us issues with all the Sony cameras so it’s highly recommended you avoid that brand with Sony cameras.

The Sony Professional UHS-I card is very high quality and has a slightly different built than the other cards, they seem a little tougher. These cards perform very well in terms of speed and work flawlessly in Sony cameras. They are a little more expensive than some of the other options though. 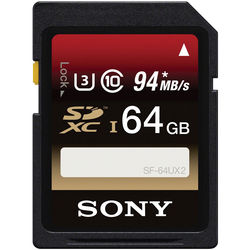 This is one of latest UHS-I card from Sony. It’s technically slightly slower than the 95MB/s card but it is using a different type of flash. I haven’t seen any real difference in reliability between the two models of Sony cards.

Sandisk Extreme Plus UHS-I U3 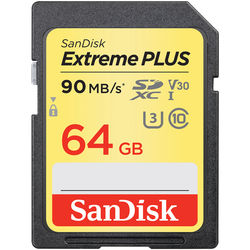 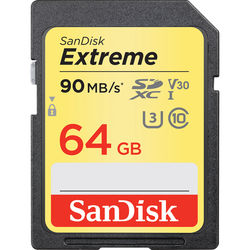 The Sandisk Extreme card is one of the easiest to find. Target, Walmart, Best Buy usually carry them. When it comes to performance in the Sony RX100 VI, the Extreme cards work great.

Delkin has always made reliable cards that perform well and the new Advantage is their latest brand of card. I personally usually use Sandisk, Sony or Delkin in my cameras and have always seen great performance without any reliability issues.

What Memory Card Size To Buy

There is always some interesting discussion based on what size of memory card you should buy and memory card manufacturers. Many Bloggers and Youtubers keep trying to push people to buy bigger cards so they can make more money or get higher commission payouts, but I have some recommendations on what cards to buy if you’re just casually shooting.

The size of memory card you should buy will depend on what you plan on doing with the camera. Someone that shoots a lot of video might want to buy a bigger card, but someone who mostly is shooting photos and maybe a little bit of video will be fine with a 64GB card.

I personally still use 64GB cards, they are the best bang for the buck and I carry multiple cards and very rarely use more than one in a day.

However, with prices being so low these days, it might not be a bad idea to go with 128GB cards and I will probably upgrade to testing all 128GB cards next year when that becomes more normal. But right now, 64GB are the mainstream and they still sell the most based on the analytics I see on this site.

Big SD Cards Are Not Worth It

When thinking about going for 256GB or even 1TB cards, I personally think it’s a waste of money. The medium doesn’t have the physical durability to justify spending $300 dollars on a card. SD cards are fragile, they break, they don’t last very long and are easily damaged, so 1TB SD cards just don’t make sense.

It takes me about a year of shooting to reach 1TB worth photos. That’s about my average, 1TB a year. Even with the low 100mbps 4k bitrate of Sony cameras, it will still take forever to fill 1TB worth of video and you really wouldn’t want to wait for the camera to fill up a 1TB card before offloading your footage and backing it all up.

So my advice when buying cards, don’t give into the marketing or temptation to get a massive card. They are pointless and almost worthless. Stick with 64GB cards or 128GB cards even if you shoot a lot of video.

When trying to buy memory cards for Sony cameras it’s important to know a bit about the numbers, ratings and specs of the cards. There are only a few things you need to know and it’s a little complicated but getting better over time.

SDXC vs SDHC – This has to do with how the file system is written. 64-bit vs 32-bit. Sony cameras will take advantage of 64-bit which allows for files to be written larger than 4GB. This is very important and convenient when shooting video so I do recommend going with SDXC cards if you’re shooting Sony.

A1, A2 – You’ll start seeing the A1 and A2 rating more often as new cards come out. It’s pretty irrelevant for photography and cameras since they are designed for running apps with computers or tablets. The A1 and A2 rating means the card has a different type of caching system that allows for significant improvements to random read and write cycles. Since cameras only write sequentially, A1 and A2 offer no benefit to performance.

If you decide to buy a bigger card than 64GB. Be sure to keep an eye out on the speed class. Sometimes they get faster as the cards get bigger and sometimes they get slower as the cards get bigger. For example, Lexar only offers their 633X card as a U1 speed class until the card gets to a 256GB size. This is an attempt to push you into buying a bigger more expensive card if video shooting is your focus since you’ll need U3.

Can you use a Micro SD card with an adapter in the Sony RX100 VI? The answer is yes. I don’t test micro SD cards since I’ve had too many issues with adapters and I just can’t recommend them.

I carry a few as backup in my bag and if you have them you can use them, but if you’re buying a new card, I don’t recommend going with micro SD cards. Not to mention the micro SD card market is completely crazy with different models and brands and specs coming out every few months. It’s a very confusing market to work in and to keep up with as you can see from my GoPro Hero 7 memory card tests.

Right now the best place to buy memory cards are from trusted sellers. There are a lot of counterfeit cards out there and they tend to flood Ebay. I’ve personally never had any issues getting counterfeit cards from Amazon but some people have reported on it. If that is your concern, stay away from Sandisk, they are the most counterfeit brand it would seem.

The other option is to do what I usually try to do, and that is buy from Adorama or BHphoto. I usually favor BHphoto since I have a better relationship with them and they hook me up with a lot of loner gear and cool offers which help me run this site. But both Adorama and Bhphoto offer great services.

Locally you can also go to Target, Walmart, or Bestbuy. Usually you’re limited to only a few choice, mainly just Sandisk Extreme cards which are fine for a camera like the Sony RX100 VI.

The Sony RX100 VI isn’t really a monster when it comes to pushing data to SD cards like some of the bigger cameras out there, but it is a little workhorse camera with a ton of capabilities, so having a nice card can go a long way.

There is performance bottleneck of about 38MB/s which is good and bad. Bad in that it will take a little longer to clear the massive buffer, but it’s good in that it opens up a lot of options for memory cards. You won’t need to buy the fastest memory cards because the camera won’t be able to take advantage of the speed. So you get just as effective results from something like a Sandisk Extreme or Sandisk Exteme Plus.