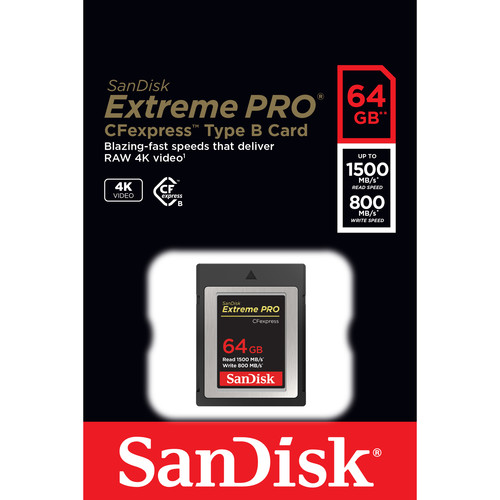 CFexpress is finally upon us and several cameras already have the hardware to support it.

But will it be the format we all hoped for?

There are a few big things I’ve seen and want to point out about this new format that is now offered by several brands at several different retailers.

As you know the firmware just dropped for the Nikon Z6 and Z7. They only mention full support for Sony Tough CFexpress cards. It’s likely other cards will work but there could be bugs like we saw with the Fujifilm X-T3 and it’s early compatibility with UHS-II brands of memory cards. Crashes, crashes and more crashes.

Here are some Sandisk Cards if you’re willing to roll the dice. It would be weird for Sandisk cards not to work as well, however, if you remember back, CFast 2.0 Sandisk Extreme cards for the Canon 1Dx II initially had issues, so it’s possible you could run into some problems with these in the Nikon Z cameras.

The advantage with the Sandisk cards is they offer them in the 64GB size.

Before you order, make sure you read this article or at least scan it because it’s not all sunshine and roses and it might not be worth the upgrade if you already have XQD.

I’ll be testing these as soon as I can get my hands on them. I’m back in Japan now which means things like this come way later, and often they are twice as expensive.

I’m not expect to see in improvement in camera performance. CFexpress uses a dual lane PCIe 3.0 interface to achieve those net breaking speeds posted by the manufacturers.

There is an extremely high chance, actually I can almost guarantee you that all XQD cameras out there today only have a single lane PCIe 2.0 interface that will run the CFexpress cards at a throttled down XQD speed. If there is an improvement with in-camera speed, it will likely be subtle.

However, transfer speeds from your card to your computer with a USB-C CFexpress reader should be extremely fast, but only if you’re copying to an internal SSD drive or an external USB-C SSD drive. Mine usually max out at about 500-600MB/s where as my internal MacBook Pro drive runs at around 1000MB/s.

Currently my only XQD reader is a USB 3.0 that I have to dongle, and the best speeds I can get are only about 200MB/s with XQD cards.

But don’t worry, I have everything coming my way in different sizes and I’ll be able to test it all soon.

CFExpress – It’s not cheaper unless you Go Big

At least not at first.

There was this big idea floating around that because CFexpress is an open technology that it would be cheaper than its Sony-owned rival XQD.

Now we are seeing that’s not necessarily true.

Here is the current list of prices of each format.

The current price for a 64GB CFexpress is $150 (which is what most people buy, based on data from my site), but it’s still more expensive than XQD by about $20 USD, but they are the slowest of the CFexpress cards.

When moving up to the 128GB cards, they are only $10 more but off an even better performance boost.

The same price or $30 more depending on the card, but you get a significant speed boost with XQD. And XQD is actually less expensive or the same price if you go with the 120GB cards.

Meaning, XQD is simply a better format than UHS-II based on price and performance, but CFexpress is cutting it very close with the price.

CFExpress Is Better When Bigger

You know what always say, it’s not about the size . . . well with CFexpress it is.

If you want a larger card in the 256GB range, CFexpress is coming in at about $25 less expensive than XQD, but it’s also 3x faster instead of just 2x faster like the 64GB cards, but it keeps getting faster the bigger you go with the 512GB cards showing a 3.5x improvement in speed over XQD.

If you’re shopping in the 128GB range, then CFexpress is only $10 more, which means you might as well just upgrade for that insane 1,200 MB/s write speed which is 3x faster than XQD

While 800MB/s for the 64GB is still really dang good, it’s only twice as fast as XQD. Which doesn’t always result in twice the performance. As we see with UHS-II vs UHS-I.

UHS-II is three times as fast as UHS-I, but we only see about a 51% difference with in-camera speeds when comparing performance in the Sony A7rIII, or a 70% increase in speed. When looking at the Nikon D850 we see an 86% increase in speed.

XQD is rated 33% faster than UHS-II (400MBs vs 300MBs) but when we compared UHS-II speeds in the Sony A7rIII to  XQD in the Nikon Z7, we see about a 60% boost in performance instead of a 33% likely due to the camera being larger, or possible newer tech.

Here’s when things get interesting. When looking at XQD in the Nikon D850 vs the A7rIII we see an 85% increase in speed.

Based on these stats, the 64GB CFexpress card which is twice as fast as the 64GB XQD could provide at least an 85% speed boost more or less with mirrorless cameras but maybe more in DSLRs.

It’s interesting that with the Nikon D850 we see a 125% speed boost with XQD over UHS-II speeds in the A7rIII. So it will likely be the bigger flagship Nikon DSLRs that get the biggest improvement in performance.

So this is interesting, why are the Nikon Z7 and A7rIII slower than the D850?

First, we have to talk about what is happening when a camera writes a file.

Cameras Have To Process Each Shot

A camera’s CPU and ADC have to do a lot of work to each shot before it’s ready to write to the card, this happens sequentially and you end up with a delay between the write cycle.

First, the camera has to convert the analog signal to digital, apply noise reduction among other analog cleanups before it’s even ready to write to the card. Then EXIF data must be applied to each file, recording information like the ISO, shutter and aperture, lens data or copyright information. Sometimes these RAW files even come with a baked-in lens profile correction. Often thumbnail data is also embedded.

If you are shooting RAW+JPG the speed slows down even more since the camera’s processor also has to convert RAW to JPG applying sharpening effects, noise reduction, color, etc.

Thermals Will Be The Bottleneck

While analog to digital conversion is happening and the camera is writing data into each card while still shooting, the CPU or some components are going to start thermal throttling with smaller body cameras to protect the components. Or now even CFexpress cards are capable of thermal throttling which is an interesting new feature that should maybe improve the longevity of the cards.

With the Nikon Z6 and Z7, you also have to consider the smaller bodies are going to have some more issues with heat compared to the bigger cameras.

Thermals will be the limiting factor with small body cameras and it’s going to be the biggest reason for sports shooters to stick with DSLRs if they want the absolute best performance and we can already see that when we look at the Z7 compared to the D850.

The Big Difference Between XQD and CFexpress

The big thing with CFexpress Type B cards is they offer a dual-lane PCIe 3.0.

My question is, are the new cameras like the Z6 and Z7 even setup with PCIe 3.0 tech that is configured to deal with dual lanes? Or do the current cameras just have PCIe 2.0 tech with single lanes that can be firmware upgraded to take PCIe 3.0 cards? I would bet money that’s the case.

XQD has PCIe 2.0 with dual lanes with version 2, but are we actually seeing that? Because I’m only seeing cards with the rated spec of 400MB/s which was the spec for the XQD version 1 with PCIe 2.0 and a single lane. XQD v2 should be able to go up to 1GB/s.

This means maybe you could take the rated spec written on each CFexpress card, and cut that speed in half, and that’s more realistically to how the card will perform when doing a sequential PCIe 2.0 single lane data transfer without all the camera processing thermal throttling and buffer delays on top.

In other words, the 64GB CFexpress cards might perform exactly the same as XQD 64GB cards or close to it in our current cameras.

I’ll let you know as soon as I can get my grubby little hands on them. Unfortunately, I live in Japan and there is often at least a 300% markup on memory cards here for absolutely no reason. Yes, even Sony cards. Well I know the reason, it’s because Japan tariffs absolutely everything so then the Japanese brands (Sony and Toshiba) can take mad profits because they have no cheap competition.

You guys think the USA tariffs are bad, come to Japan, buy your $50 North Face backpacks for $400. The average price of watermelon here is $30, for one! So grocery stores sell them by the slice.

I fully expect to see more variety and prices of CFexpress to come as more brands release their versions. It’s likely we will see different tiers in performance at different prices as we do with UHS-II and UHS-I cards.

We’re also going to see Type A and Type C CFexpress cards in the future. CFexpress Type A cards will be around the same size as SD cards but only offers a single lane. Type C cards are much larger but also much faster and are being adopted by cinema cameras.

Could CFexpress Type A kill off SD cards?

If they release it before UHS-III, maybe, it’s an interesting idea. But really I doubt it. I could see cameras being equipped with dual cards slots, CFexpress Type A and Type B. You could see some incredible performance with that setup as long as the cameras were equipped to take full advantage of PCIe 3.0. It would probably make more sense to do that rather than adding a CFexpress + UHS-III which is a different interface, but eventually, we’ll see SDexpress and that will be a PCIe 3.0 interface.

I imagine we’ll see a ton of white-label brands as well as other legitimate companies. But I fully expect to see cards from Hoodman, Nikon, Fujifilm, Panasonic, Verbatim, Angel Bird, possibly even PNY and Transcend and the 50 other brands you’ve never heard of here in Japan.

This could be what eventually kills XQD, but currently, the 64GB and 120GB XQD cards are still good options, unless you want to pay $20 more for that potential 64GB CFexpress speed boost.

I full expected CFexpress to completely outperform XQD with price and performance, but that didn’t happen. CFexpress did not make XQD irrelevant like we all thought it would, at least not yet.

XQD right now still might be the way to go unless you want to buy larger cards.

The real winners here are the video shooters that need massive cards since the larger CFexpress Sandisk cards are the best value, matching UHS-II prices but with insane performance. No longer will the memory card speeds be the limitation for recording 4k RAW video internally.