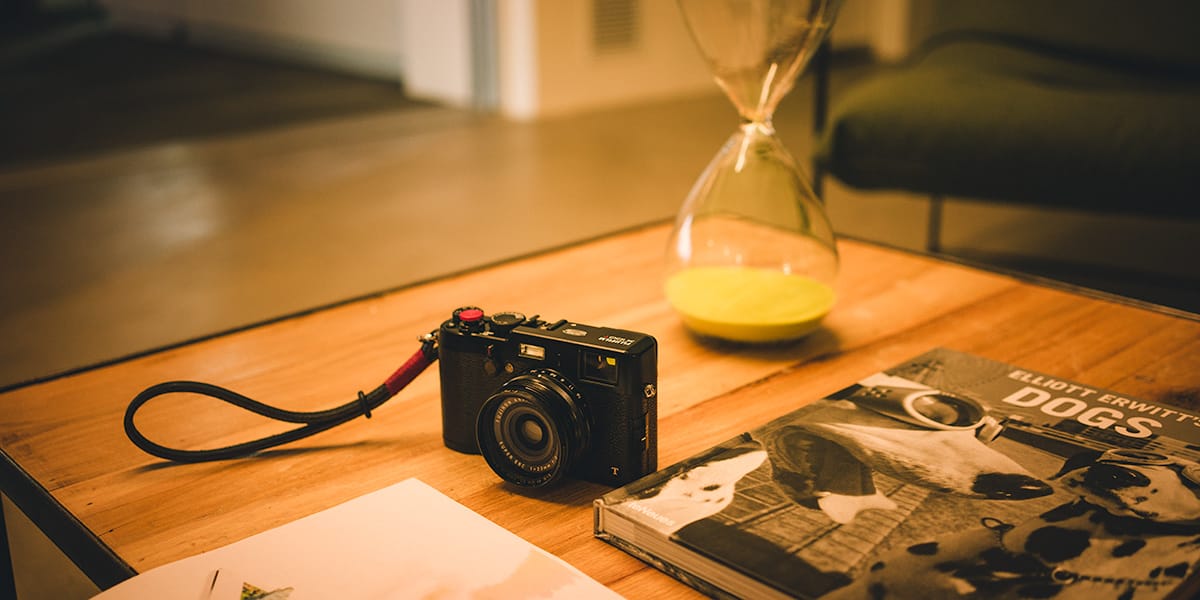 As someone who has never used a Fuji camera before I thought it would be fun to share my perspective on the new Fuji X100T. So here are my thoughts and honest first time impressions on this camera that’s totally new to me.

It might seem strange for someone with a Sony A7r and a 5Dmkii to go out and buy a small fixed lens APS-C camera like this. I’m not one of those photographers that thinks one brand is better than another, rather I will buy a camera that does what I need for the style I’m looking for. And this Fuji X100T just seems to be perfect for carrying around with me and taking daily life photos.

My Canon is simply too big and my Sony seems like it was built by Fisher Price as it’s completely falling apart after only a year of significant traveling and carrying with me everywhere. So I needed a camera to fill that void, and guess what? No other camera is better for this than the Fuji X100T. Except maybe the Panasonic LX100, but I’m not really interested in a zoom m43 system, for forget I said that.

On to the overview.

First Impressions – Out of The Box

Not having any experience with any Fuji before, I was surprised at how quickly I was able to navigate this camera and adjust all the settings. It’s all just right there and incredibly intuitive. This was a relief as camera manufactures rarely get the UI right. Maybe it’s a Japanese thing, but up until a few years ago navigating through any camera’s UI was painful to say the least.

The FujiX100T is actually very simple and the customization options are amazing, better than expected. I had fun sitting there for 45 minutes the first night I got it adjusting all the settings to suit my shooting needs, taking away worthless features like video off the main function buttons and adding back on useful ones like ND filters and Flash controls.

So far I really love the look of this camera. I haven’t had a lot of time with it yet but if does kind of give me that Zeiss feel I get with my Zeiss lenses on my Sony A7r.

Plus Fuji is probably the best company out there at making color profiles. They have spent years making film look awesome and we get several amazing film simulators which I post later.

It’s just so easy taking nice photos with this camera. Shots that would seem boring on my Canon or Sony just come to life with this camera. I can’t really explain it. Maybe it’s just I have a new motivation because I have a new camera, but I don’t know. Color and contrast are so rich and the bokah is so smooth. If I had to guess I would say it’s the lens and camera profiles doing this for us.

But look at this, this was just coming out of the same elevator I come out of everyday at work.

The Looks And The Great Gear

My favorite part of this camera is how much you can customize it with accessories. It’s kind of like Leica in that respects but at a millionth of the cost. And the camera looks beautiful. 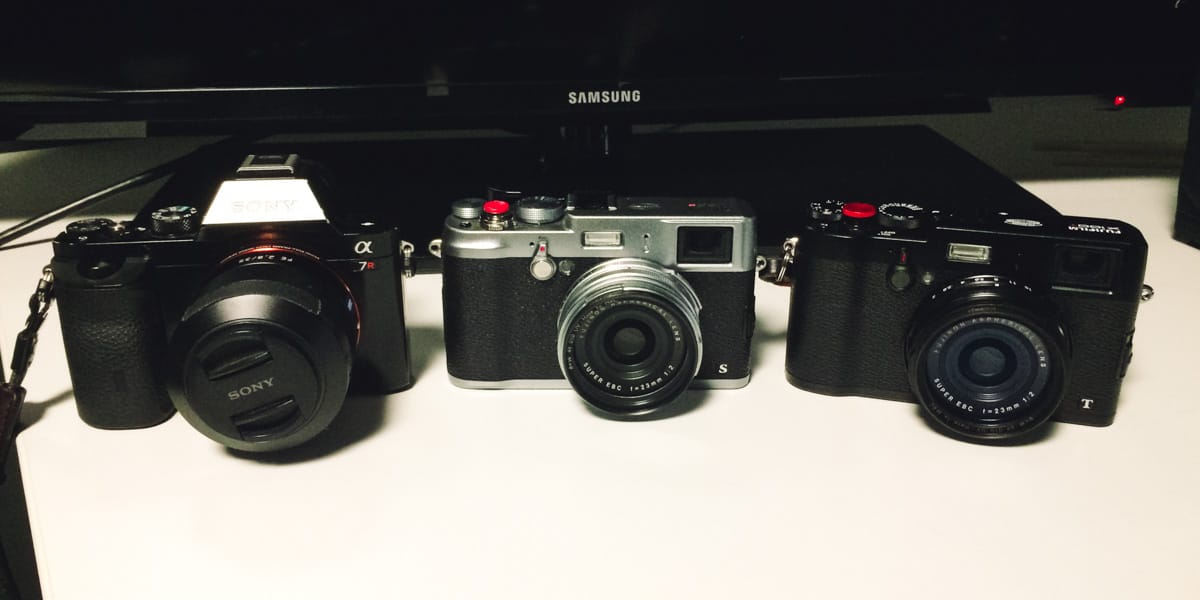 It was hard deciding whether I should go all black or silver. I know the silver looks classier and more expensive, it’s the ‘nicer looking’ of the two. Side by side it really is. But something about me liked the black more. It’s weird, I know the silver is prettier but I really like the black so that’s what I went with.

Hopefully the black will be more low profile and turn less heads. I get enough people bugging me when I carry around my giant white Canon lenses with comments like, “Gee that’s a nice camera you got there.” With the silver Fuji I’m sure it would be something like, “Gee that reminds me of my dads old camera.” Hopefully going black will alleviate some of this. Plus, that’s the camera Batman would use. So there you go.

You have to use to appreciate it. You might think using an optical viewfinder is out dated and that you’ll never hold it up to your face to shoot photos since you have an LCD screen. But this just isn’t the case. It’s so fun using the optical viewfinder, the technology inside is so far beyond anything anyone else is using right now. It’s this incredible fusion of classic photography mixed with cutting edge technology.

Focus speed is the fastest I’ve ever shot with. Yes, the Sony A7r is fast, but not in low light like the Fuji X100T. It’s also significantly snappier in every way than the Fuji X100s. Especially when it comes to focusing.

A shot like this of my rabbit would be very difficult to shoot in the very low light of this scene. Plus anyone that owns a Dutch Havana, knows they never hold still for more than 2.1 seconds.

Usually my A7r has to send out a focus beam then seek for a bit only to miss 50% of the time. And autofocus on my 5Dmkii is borderline worthless. Not so with the Fuji X100T, although I have had it back focus several times on me now for some reason. Update: I believe this problem could caused by setting the focus boxes to the smallest available option. I’ve recently starting using a larger focus box and it seems to be helping.

Yes, the Bokeh is amazing. So creamy. Feels like you’re shooting full frame. Fall off is beautiful giving it that amazing 3D feel.

The film simulators are my favorite part.

Honestly, I don’t really think you even need to shoot RAW with this camera. You have several profiles to pick from. Just go for it. The camera is great with exposure and all you’ll need in post is maybe a little contrast. Plus the RAW files are 35MB for some strange reason. Seems excessively large for a 16MP camera.

I’ll have more samples when I actually get a full day with the camera. So bare with me.

These are taken RAW and the profiles are added in Lightroom. No contrast or any other post processing added.

Being able to shoot with a high speed sync flash fill is another really cool feature I love about this camera. Because it’s a leaf shutter built into the lens you end up with an insanely fast flash sync. Meaning you can turn your shutter to 1/10,000sec which will completely dim out your background allowing you to use your flash as a fill.

I haven’t spent too much time with the camera yet, but I’m already really enjoying taking with me everywhere. It’s really the most fun I’ve had with a camera so far and beats the hell out of an iPhone. And yes, I do love my A7r, and it is awesome, but there are also a lot of things I hate about the A7r. I haven’t found any hate yet in this Fuji.

Other Resources You Should Check Out

I’ve been keeping a list of all the gear and gadgets most of which I use. You can them here:

Must Have Accessories For The FujiX100T

This blog should get interesting over the next month or two as I uncover all the secret nuances of this camera. So stay with me!

Push your favorite social sharing buttons up top as well. Thanks!

An extremely rare sunset in West Hollywood. Taken from behind a tinted window.