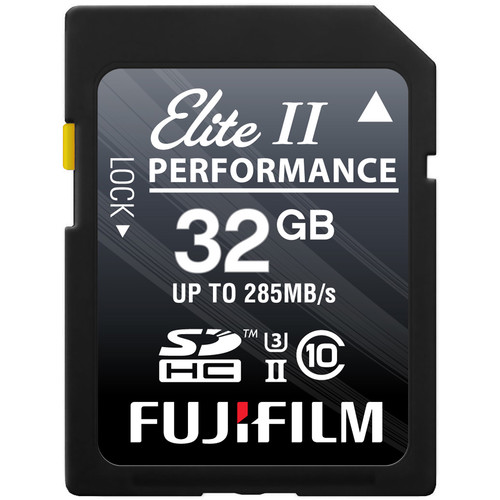 Fujifilm has stepped into the flash memory card game with their UHS-II SD memory cards that designed to be used with their UHS-II compatible cameras; like the Fuji X-T2 and the Fuji X-Pro 2. While the specs look promising, the card performs almost identical to the Transcend UHS-II card. This makes me believe it’s just a relabeled Transcend card as I don’t believe Fujifilm does any flash manufacturing themselves. Of course, I could be wrong.

As a side not, the Hoodman Steel UHS-II memory card also performs almost identical to this card and the transcend card.

That being said, the Transcend cards are great and so is this Fujifilm Elite II card. It’s not as fast as some of the other cards out there in terms USB 3.0 write speeds, but it performs very well in most in-camera memory card speed tests and its USB 3.0 read speeds are fantastic.

Because this card is so fast at read speeds via USB 3.0, it makes it one of the best options for videographers who are looking to offload their video files from their cards as quickly as possible.

Like the Transcend cards, I was also able to get slightly faster performance out of the Fujifilm Elite II card than what it was rated for with USB 3.0 tests in Windows 10.

In terms of read speeds using USB 3.0 UHS-II card reader, this card is one of the fastest cards you can buy. It’s write speeds are slightly slower than the competition when tested with USB 3.0, but in-camera, it’s easily able to keep up with what any camera can put out and will often make it to the top five of fastest UHS-II memory cards with in-camera tests in UHS-II compatible cameras.