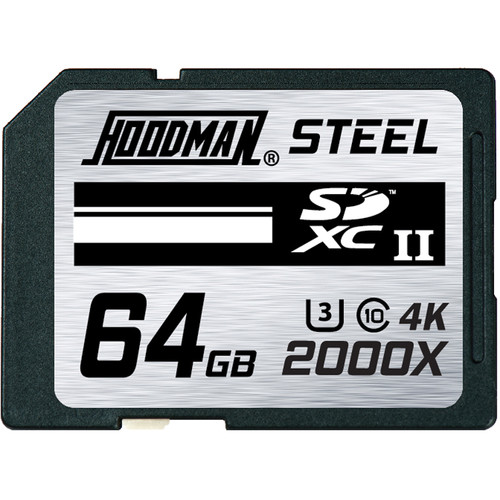 The Hoodman Steel 2000x UHS-II memory card is a fairly new card and brand to join the ranks of UHS-II cards. In terms of speed and performance, it performs very close to the Transcend UHS-II cards or the Fujifilm UHS-II cards, except it’s read speeds are a touch slower.

If you’re looking for a good card that will function well for UHS-II cameras, then the Hoodman cards will show significant performance over UHS-I cards or even older UHS-II cards like the Lexar 1000x.

The Hoodman Steel UHS-II cards can be found in two sizes – 64GB and 128GB.

Both cards are SDXC and will be formatted exFat in camera which is a 64-bit file system.

Real world performance is pretty good with the Hoodman UHS-II cards. They’re not as fast as the best cards from Lexar, Sony and Sandisk, but they do perform well for an off-brand company that probably just buys white label Transcend cards to repackage, which is something to consider. You should just buy memory cards from companies that are known for making flash memory, such as Lexar, Sandisk, Adata, Delkin and Transcend. I think Fujifilm, Hoodman and a few other brands like Komputerbay buy cards from these flash memory manufacturers and relabel and repackage them.