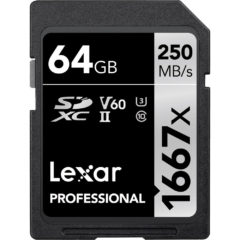 The Lexar 1667x is a new card by Longsys that sits somewhere between the Lexar2000x and the Lexar1000x. This card would be ideal for 4k video shooters with the lower bitrate cameras that only shoot 4k at around 100Mbps. Often the slower cards like the Lexar 1000x can encounter minor buffer issues that this slightly faster card solves.

Lexar is no longer a Micron company and it seems like their quality control has slipped. Because of this, I no longer consider Lexar a top-tier brand. However, for the value, they can be a really good buy.

If you want the best memory card for your specific camera check out the memory card speed tests for some great recommendations.

The Lexar 1667x UHS-II performs well with USB-C memory card readers in Windows 10. This card performs about the same as other v60 cards and should be considered an upgrade from the 1000x which only writes at UHS-I speeds but reads closer to UHS-II speeds.

The Lexar 1667x has a write speed of around 104MB/s and a read speed that is also very good which means it’s a great card for video shooters or even photographers that don’t always need the maximum speed that UHS-II sometimes offers.

Check how this card performs in your camera by looking at the camera memory card tests to make sure it doesn’t have any compatibility issues. 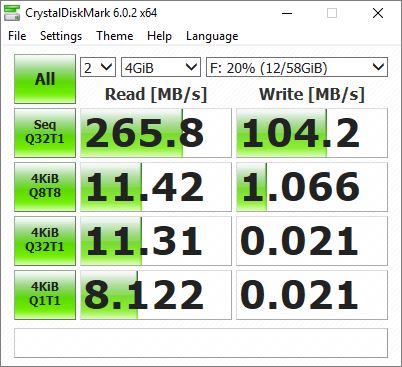 Lexar only makes these cards in sizes 64GB and larger. You will want to be careful using this card with some of the high bitrate rate 4k cameras since it might not perform properly. If you own a high bitrate 4k camera you may want to upgrade to something a little faster or more reliable.

Lexar cards sometimes come with USB 3.0 memory card readers but USB-C readers are on the market now and they do perform a little better with some cards.