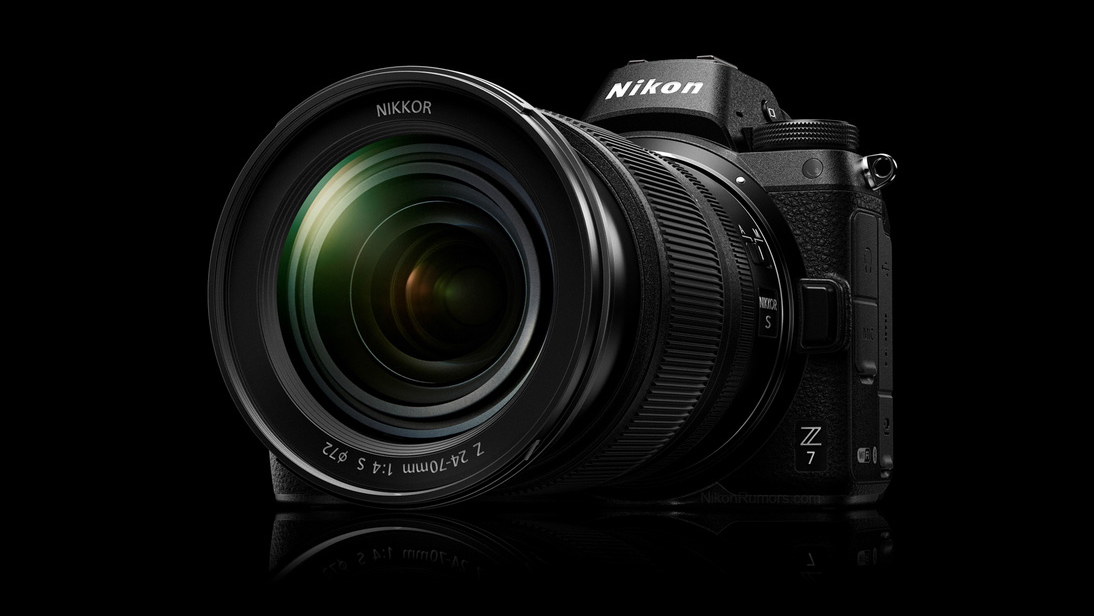 Nikon has announced their new Z Series full frame mirrorless cameras. The Z6 and the Z7.

These two cameras will be very important to the mirrorless full frame industry after Sony has for five years completely owned the full frame mirrorless camera market.

Update: I thought it would be fun to share this. After the announcement of these cameras I’m seeing a lot more traffic to my Nikon D850 and A7rIII and A7III pages. 🙂 Looks like people aren’t very happy.

Has Nikon Defeated Sony? – Maybe, Here Is Why

For years Nikon users wanted a larger mount for their cameras like Canon had. A larger mount allows for better engineering capabilities in optical designs and lens performance.

With the larger mount, Nikon will in theory be able to achieve very fast lenses such as the 56mm f0.95 (manual focus only), and 50mm f1.2 AF lens, where as Sony E-Mount is still limited to f1.4, based on what they have released. Today, Mitakon has managed to make f0.98 lenses for the Sony E-Mount so we’ll have to see how this Nikon manual focus lens compares so we can see if that bigger mount is just a bunch of hype.

With this larger Z mount, it might also be possible for Nikon to include a smaller Medium Format sensor like Fujifilm has in their GFX cameras in future models.

The proof will be in the pudding. The camera could have some huge design flaws once it gets out in the field. Who knows.

Nikon Has A Bigger And Better LCD Screen

Nikon Has A Better EVF

On spec the Nikon has a similar EVF to the A7rIII, but completely blows the A7III away.

Nikon cameras usually have better weather sealing but we’ll have to wait for more tests to confirm. So this is a maybe.

The Nikon uses XQD memory cards that are more durable and way faster. Unfortunately, they only get one XQD card slot. This will trigger the pros, get ready!

Nikon has announced a new line of lenses called S-Line (S is for silver). These are the best of the best in terms of tech and coatings. These new S-Line lenses will have Nano Crystal Coatings.

Personally I think they look pretty cheap. They remind me those cheap plastic Sony 50mm f1.8 and 85mm. Yikes, but I’ve yet to hold one.

You can see all the Nikon Z Lenses here, but their roadmap looks like this. 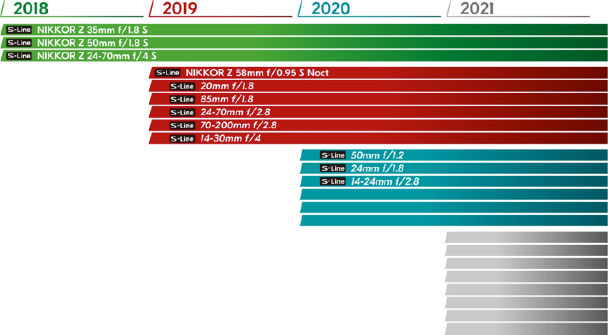 The Z6 and Z7 will have 4k 30fps 10-bit N-Log video with HDMI out. For Sony users you will have to wait for the Sony A7sIII before you can have 10-bit, which will be legend I’m sure.

Nikon will continue to develop F-Mount lenses that will work perfectly with the Z-Mount camera via adapter that comes with the camera. D lenses will not autofocus.

They Didn’t Launch With Any Cool Lenses

Nikon brags about how awesome this new mount is and how it’s better than sliced bread and how they “reinvented mirrorless,” but then they launch with 24-70mm f4 lenses and f1.8 prime lenses.

I guess we have to wait until next year to get the good stuff.

The Nikon Z cameras only have one memory card slot. What a shame. But seriously, who cares.

This is not something that bothers me at all. People are freaking out about this, honestly it’s fine. I could care less and don’t usually use both card slots in my camera anyway, if I do, I set them to overflow. Canons for years only had CF cards and it was fine. The Nikon XQD cards are definitely more durable than SD cards. It might not be an issue, but I get it, people want peace of mind. However, I thought in todays day and age pros tethered anyway, because when a camera doesn’t tether they sure never shut-up about it. 🙂

And look, even though cameras like the Fujifilm X-H1 have dual memory cards and the Sony A7rIII has dual memory cards. The Fujifilm is constantly locking up from bad SD cards, and the A7rIII still has compatibility issues with Samsung cards. Bottom line, SD cards sucks, we should be happy the Nikon Z6 and Z7 has one XQD cards instead of two unreliable SD cards.

Also remember, mostly non-pros are buy the cameras anyway. Fujifilm reported that 80% of people buying their GFX Medium Format camera system were none-professionals, 80%! That’s a lot of hobbyists buying big expensive cameras. Nikon knows the analytics, not having dual memory cards isn’t a big deal when the majority of the people buying these camera will likely be non-professionals, as with the GFX.

For the sake of Nikon, I’m really hoping they somehow work out a second card slot in the battery grip (likely not possible).

We will possibly see CF Express memory cards with a firmware update in the future. These are crazy fast by the way.

The good news, XQD memory cards are way faster than the UHS-II cards found in the Sony A7 series.

You can see and compare XQD memory card performance in the Nikon D850 and UHS-II memory cards in the Sony A7III.

Nikon Z6 and Z7 Poor Battery Life | But Not Really

I’ve mentioned this in other articles about how everyone only cares about battery life. By not having a huge battery, the Nikon Z7 or Z6 is going to have a very rough time and the Sony fans will crucify this camera. Color science, lens quality, high-resolution LCD and industry leading EVF, none of that matters, in 2018 it is all about battery life!

But look, the battery is pretty damn good in this Nikon. Only 380mAh smaller than the Sony.

The Z6 and Z7 will take a new Nikon EN-EL15b Battery. The b is new, not 100% confirmed on the mAh rating yet, but the EL15 is 1,900mAh. I would imagine the EL15b is the same, except with a different discharge and heat profile to deal with the EVF, LCD and IBIS.

The Nikon has a bigger and better LCD and better EVF and it will use more power. That’s a good thing. You can only do so much with physics here.

If you notice, the battery life is pretty similar to the X-T2. Not a lot of people are complaining about the battery life in the X-T2. I can go a full day on one battery shooting street photography with the X-T2 and I’m fine. But then the Fujifilm X-T2 is rated the same as the A7rII. As an owner of the A7rII and X-T2, this is simply wrong. Sony could be tuning their cameras to intentionally beat the CIPA rating. It wouldn’t surprise me. The A7rII battery life was abysmal. The X-T2 battery life has been fine.

I personally would much prefer a lighter battery, so I can buy the grip when I need a monster amount of power. And as we all know, Nikon makes some awesome grips.

Sony Fans Will Crucify These Cameras

In 2018, reviews comparing this camera to Sony will all be about battery life and memory card slots. It seems Nikon was looking very closely at the A7II series when developing this camera and while they beat the A7II and A7rII in every way, they got sidelined by some significant upgrades to the Sony A7III series. That is, improved battery life and dual crappy SD memory cards.

Actually, there are three things that only matter for cameras reviews in 2018. Sorry, it’s dual memory card slots, battery life and eye tracking autofocus. None of which matter for studio photographers who tether, or landscape, nature, sports, macro photographers or even the astronaut in space that like to use Nikon cameras.

The Nikon Z cameras will not have eye tracking. It may have body tracking or something in the future.

The shortcomings of this camera are really not a big deal. However, social influencers and camera reviews are.

While these Z cameras look really cool and probably perform very well, photography isn’t about image quality anymore and the echo chamber of camera reviews now compare these cameras as though they were computers or cars.

I expect these Z cameras to get slaughtered when people review them and Sony will continue to consume the full frame market.

Look out for, “In 2018 poor battery life is unacceptable.” “For my professional needs, I cannot work without dual memory card slots, I guess I’m buying Sony.”

And I bet we see, “Eurgonamics isn’t that great, my pinky just kind of hangs off the camera.” “My Pinky.” “Pinky” “Pinky.” “Pinky.” “Nowhere to put my pinky.” Expect to see the pink comments, lots of pinky comments. 🙂

Personally, I’ll probably get the Z7 and eventually move away from Sony. To me having a camera with excellent color science is the most important thing and Nikon colors have always been incredible. Having an awesome LCD will also be really nice and I bet Nikon nails focus peaking. I’ve also never liked Sony lenses, Sony focus peaking is the worst in the industry as well as their color science. Images have to look good first, all other specs are irrelevant if the camera cannot make beautiful images.

If these cameras aren’t for you, wait for the Fujifilm X-T3 before buying a Sony. The X-T3 will be a game changer.

Here are some samples of Topaz Photo AI before and after. Very useful for night street shooting. Z6 + 24-120mm f4.… https://t.co/RNgslVoQM2
10 hours ago
Follow