The Sony Alpha 1 features some pretty competitive capabilities and hardware that allow it to take advantage of the very fastest CFexpress Type-A memory card. This guide covers the specs, requirements, and benchmarks of the various type of memory cards and their speeds tested in the Sony A1.

Use this guide to find the fastest memory cards for the Sony A1.

There are a few big things you need to know before buying a memory card for the Sony A1.

First off, the Sony A1 takes two different types of memory cards in the same slot. SD cards, or CFexpress Type-A (not to be confused with the bigger Type-B). 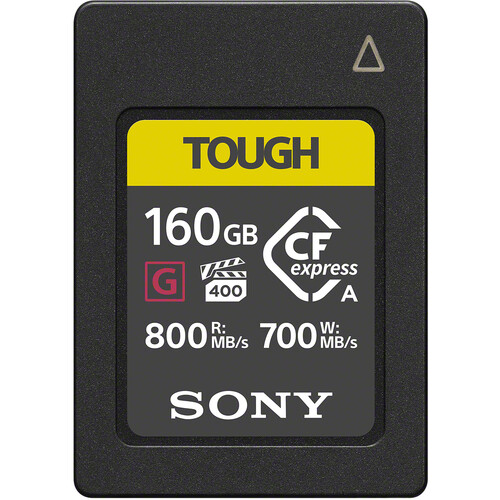 This is a list of the fastest memory cards for the Sony A1 shown with their n-camera speeds and broken down by the speed class of each card.

Professional sports shooters will want the CFexpress Type A cards for improved speeds. Hobbyists can get by with the UHS-II cards unless 4k S&Q mode with the S-I intra-frame recording is needed. You can also just use XAVC HS if you want to work with only v90 cards in this S&Q mode.

The Sony A1 looks to favor a particular type of flash and not all UHS-II V90 cards were showing the same results. Prograde, Lexar, Kingston, Hoodman, and Toshiba cards were not performing very well compared to the other UHS-II brands. Be sure to check the benchmarks further below to compare the speeds of all the different brands of cards.

Here are the top recommended memory cards for the Sony A1.

I haven’t been able to benchmark a Lexar CFexpress Type-A card in the Sony A1 but with USB speeds they are notably faster than any other card.

Also, check out my favorite Accessories For The Sony Alpha 1.

These benchmarks are measured by shooting a series of bursts in Uncompressed RAW until the buffer fills, then measuring how much data was written against the time it took the clear the buffer.

Do You Need CFexpress Cards?

CFexpress Type A will clear the buffer more than twice as fast as UHS-II memory cards, but they will only be required by the camera to record in some of the high frame rates (120p) in S&Q mode with the XAVC S-I codec, this is an H.264 codec that uses an intra-frame compression. You can use other codecs with S&Q mode like XAVC HS which uses H.265 with standard UHS-II v90 cards. This is also how it works in the Sony A7sIII and Sony FX7.

For all other types of video, including 600Mbps H.264, UHS-II cards will work as long as they are rated at the v90 speed class.

CFexpress cards will also clear the buffer quicker than UHS-II cards, how much faster? Sony lists it at 155 frames at 30fps, 238 frames at 20fps, then it will give you unlimited recording at 15fps and slower.

After benchmarking the camera, the difference between CFexpress and UHS-II cards was significant. With the Sony CFx Type A card, I was getting write speeds in-camera at around 600MB/s. With the fastest UHS-II card, I was only able to write at speeds of around 250MB/s, this will make a big difference when it comes to shooting long bursts.

Using a Second Card For Backup

For photographers, if you use a second card for backup that is a slower card, like UHS-II or UHS-I, it will slow down the whole system to that speed.

Do not buy CFx cards and then use UHS-II cards or UHS-I cards in the second slot as a backup. Use equally rated cards in both slots so the speed of the camera does not get bottlenecked by the slower card.

If you shoot RAW+JPG, can you use a slower card in slot two? The JPGs are smaller, but still not that much smaller and can still slow the system down, plus the camera writing the JPGs slows down with the processor a little bit as well. So expect a minor performance hit writing RAW+JPG. It would be best to do RAW+RAW with equally rated cards.

The max bitrate for 8k in the Sony A1 is 400Mbps. This means you have a data stream of 50MB/s, which is a speed rating supported by even the slower v60 UHS-II memory cards. You do not need CFexpress or v90 memory cards for 8k video. You only need faster cards for h.265 at 600Mbps or when shooting high frame rate S&Q modes.

When a camera records in H.265 and H.264 it is hardware Sony buys that they put into their cameras. Usually, it’s a custom part of the Arm Architecture that is licensed from third parties, so these specs are often locked in and can’t be changed with firmware.

This Is Important – When editing, you need to be very careful about using hardware accelerators to export and edit when dealing with 4:2:2 10-bit. A lot of computers and graphics cards like Nvidia and AMD still do not support 4k 4:2:2 10-bit, often it’s only 4:2:0 10-bit and they don’t give you any warning that you’re out of spec. They will just export an inferior image to what you recorded.

Test this, and consider exporting your video with Software encoding only. If you’re in Premiere, this also means switching your sequence settings to also be software only before encoding.

If you’re on a new Intel (2021 Alder Lake, I think even Tiger lake) or M1 mac, you may not need to worry about this as long as you’re using the native encoders. Avoid anything that uses Nvidia and AMD accelerators for now, as of early 2022.

Also, M1 and new Intel processors will be able to handle H.265 much easier than older computers as they now finally have improved H.265 encoders and decoders. But again, be careful when using hardware encoders for your final output, or test to make sure your hardware supports 4:2:2 at 10-bit and not just 4:2:0 at 10-bit.

What memory card size is the best for the Sony A1?

Note that H.265 even at 400Mbps is vastly superior to ProresHQ in terms of the information stored in the compression. Prores is nice because it’s very easy on the CPU, however, because the data rate of Prores 8k is massive, you’ll need fast drives to work with it.

This chart shows the maximum record times each bitrate is capable of based on the memory card size. Information is taken from the record time bitrate calculator.

Buying memory cards is a little tricky for the Sony A1.  You can save a lot of money by sticking with UHS-II cards. For 8k video, even V60 cards will work fine and cards like the Sony M Tough card are great for filmmakers that want redundancy and long record times.

Photographers that want to shoot long burst sequences will benefit from CFexpress Type-A cards as they are more than twice as fast in-camera compared to UHS-II cards.