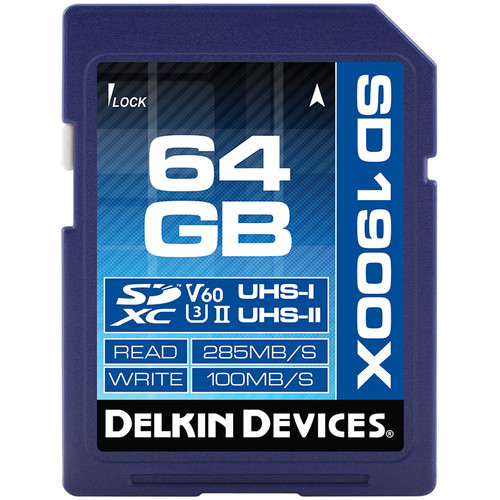 The Delkin 1900X v60 is a less expensive alternative to the Delkin V90 memory card that differs really only in write speeds. With the V60 class rating, this UHS-II card is guaranteed to deliver at 60MB/s when used in UHS-II devices. However, the card also functions very well in UHS-I devices and cameras. So you could potentially use this card for video production, which doesn’t usually require more than a 60MB/s data rate, but then take advantage of the very fast UHS-II read speeds to quickly offload your footage to storage drives.

I recommend check both BHphoto and Amazon prices as they can be significantly different.

The Delkin V60 card is designed more to be a reading monster. This makes it a great card for videographers who don’t super fast memory card write speeds compared to action photographers who do a lot more bursting. This means with a good UHS-II memory card reader and fast storage drive, you can offload your footage and be back to shooting much quicker than if you were to just use UHS-I memory cards.

Check out this guide to learn more about all those little symbols on memory cards. – it’s towards the bottom. 🙂