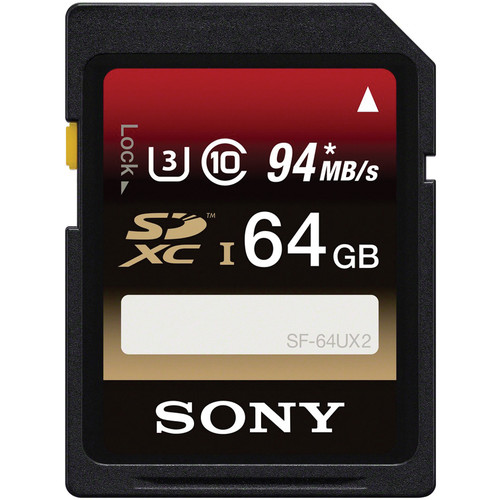 Sony makes a great midrange UHS-I SD memory card. Actually, these cards are my number one recommendation for Sony shooters who want to have reliable XAVC S 4k video capabilities. A lot of times Sony cameras just don’t like other cards and it seems to be completely random to have a camera that likes other brands or not.

In terms of speed and performance, Sony UHS-I memory cards are about midrange.

There have been a few version of the Sony U3 cards over the years. There is an older version that is quite a bit faster, and a new version that is a lot slower. I’m not really sure why this is. It’s possible they could just be running a different type of flash that’s more suited for certain tasks, like maybe durability and life-cycle. Sony is also the only memory card company that still only offers a 1-year warranty for their SD memory cards.

Keep in mind, if you are shooting video with an older Sony camera with older firmware, it may not like SDHC cards that are 32GB or smaller. If you have this issue, try upgrading your firmware.

For whatever reason, the older card seems to run a bit quicker than the new card when testing with USB 3.0 memory card readers, or in various cameras. It could be that I simply have a buggy card, or that Sony changed the configuration of the way the flash works. The card still doesn’t run slow, it runs at about the same speed as the Sandisk Extreme Plus. Where as the older version runs at a speed that’s between the Sandisk Extreme Pro and the Plus.

For video compatibility and shooting 4k in any of Sony’s latest cameras, both cards work great.