To maximize the full potential of the Nikon Z9, you’ll need the fastest CFexpress memory cards on the market. Not only do they need to be fast, but they also need fast minimum write speeds with good consistency.

Use this guide to find the best CFexpress cards for the Nikon Z9.

Be sure to also read through the benchmarks and methodology, I share some of my notes which are important since CFexpress cards can be a little finicky.

Also, see my Accessory List For The Nikon Z9.

The latest generation of CFexpress cards has improved dramatically with thermal throttling and minimum sustained write speeds in the Nikon Z9. However, the Z9 is still a little picky about cards and since it has a small buffer, you’ll want a card with good consistency vs top speed.

Here is what you need to know:

The Nikon Z9 can take dual CFexpress Type B memory cards with no restrictions on size.

CFexpress memory cards can have high top speeds but may thermal throttle and even though the cards list high write speeds, the real-world speeds are often not close. This causes some cards not to perform properly for RAW video recording and can even slow down when shooting at the 20fps burst speeds.

The Nikon Z9 can shoot video bitrates up to around 500MBs and a lot of cards, and most older CFexpress cards cannot sustain these speeds. I’ve tested most of the relevant bands to see what works for 8k NRAW video and here are the results. 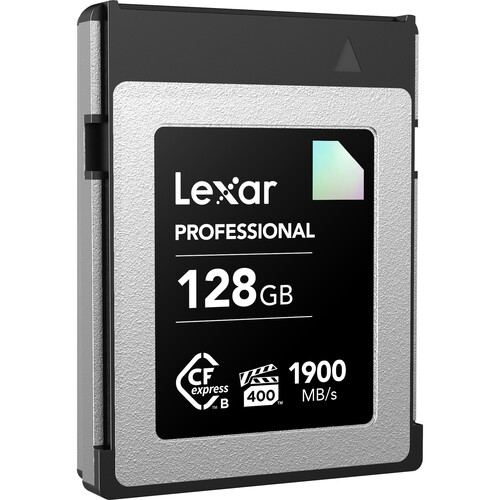 Most of the new higher-end cards are able to record 8k RAW in the Nikon Z9. Just not Sony or Sandisk right now.

Videographers can save some money with cards like the Angel Bird SE since you get a great bang for the buck, and although slower at max speeds, they can sustain 500MB/s for video recording which is enough for NRAW.

The Lexar Diamond is probably the overall best card right now in terms of features. It is one of the fastest cards, is VGP 400 certified, and is XQD backward compatibility which makes it a great choice if you’re still using older XQD cameras. I also rate the Lexar reader as the best right now.

There are also a few different versions of the Delkin Black cards, the 150GB size variants, and the 128GB variants. I didn’t see a noticeable difference in performance or speed between them and they were all able to run NRAW without an issue, but the Delkin 150GB variants typically behave a little more consistently than the 128GB varients in different tests.

All the latest Angelbird Cards were great, and the new Prograde Cobalt card was great.

I also tested two different sizes of the Lexar Gold and Delkin cards and there was no significant difference in speed. Keep in mind you’ll want large cards 512GB+ if you plan on recording NRAW.

*The Nikon 660GB Amazon link here includes a Lexar CFexpress reader bundle which is the best CFexpress B card reader at the time of writing this. There is also another bundle that includes an SSD.

For Angelbird cards you should buy the latest Angelbird CFexpress reader, it will allow you to upgrade the firmware in their cards.

Warning For AngelBird Cards: Some people are reporting that the Angelbird cards are too thick for the Z9 and they have trouble removing them or getting them to work properly. I have had some experiences with this. Angelbird cards are a little thick, but they worked fine for me in the Z9, however, they are a little thick in my Z6 and the Z6II that I tested. Sounds like there could be a tolerance mismatch with some of the cards and camera bodies. For this reason, I would only order their cards from a store that has a good return policy in case your cards have issues since Angelbird’s warranty might not cover such an issue.

For the in-camera benchmarks, a series of continuous bursts were taken until the buffer was filled. The time it took to clear the buffer was recorded and calculated against how much data was written. The Z9 doesn’t record uncompressed RAW, it uses a compressed RAW format.

For the video recording benchmarks, I shot NRAW at 8k60p for around 5 minutes on each card or until the card filled if it was a smaller card. I did a few different things in order to max the file sizes by forcing the camera to record the highest bitrate possible. I started by recording very busy landscapes of trees blowing in the wind against a blue sky, then I would also record a very busy computer screen with a lot of changing colors.

To see how the memory cards function under high heat, check out this guide to CFexpress Type-B Memory Cards.

Lossless Compression – A clean compression of the images, with no information removed.

Files are large, expect about 80 shots or more with the best card rated at 1500-1700MB/s write. As a little reference, I pulled in 180 RAW shots @ 12fps with the Canon R5 memory card tests on the Delkin Power card and Canon rates their buffer at 83 RAW shots at 20fps. Similar to Nikon Z9 Performance on the Z9 with the slightly faster Delkin Black.

High Efficiency * – lossy compressed. There are different ways of doing this type of compression, but the short explanation is information that is not being used from the entire 14-bit color space is just discarded, which is why you generally see no loss in quality. How complicated the scene is, will affect the file sizes and the information, so your buffer performance could vary scene to scene.

Files are much smaller, easily over 1,000 shots with a good card.

High Efficiency – lossy compression, more info reduced. Usually ( I don’t know exactly how Nikon does it ), there are a set of parameters, and any information that is outside of those parameters is clipped. Usually, you won’t notice this unless you do heavy editing.

Unlimited shots in this mode with a good card.

The Nikon Z9 has some interesting video specs, however, we don’t have all the abilities yet or the full specs since they will be releasing those via firmware next year. I’ll keep this updated as more information is released.

The Nikon Z9 will shoot internally, H.265, ProRes RAW, ProRes HQ (limited to 4k60 10-bit) as well as a new Nikon RAW (which comes as a license from intoPIX).

Here are the RAW video specs we have so far for the intoPix raw from their website.

An interesting spec here is the potential to shoot 8k at 30fps or 60fps. If you shoot 8k at 30fps at 500MB/s then each individual frame comes out to around 16MB. Not sure about the bit depth. If it’s even 12-bits that could be really nice to pull stills from.

For hybrid shooters that need fast cards for both stills and video, Nikon brand cards, Delkin, Angelbird, Lexar, and the Prograde Cobalt are going to be your best options.

Look for Sandisk and Sony to upgrade their cards with better-sustained minimum speeds in the future.

For those buying the Nikon Z9 just for video, you can get a really good value with some of the Angelbird cards like the Pro 1TB MKII card and their SE card.

For photographers that still use XQD cameras and readers, the Lexar Diamond card is a great option.